Bengaluru-based R R Cherla is latest corporate executive to debut as an author. His book is the fiction thriller, Devil’s Ether. 53-year-old Cherla is heading a product development team at a leading telecom MNC. In his book, he talks about technologies such as Remote Neural Monitoring (RNM) that makes possible to track a human brain, without any contacts. Cherla has been a Bangalorean for around 20 years. 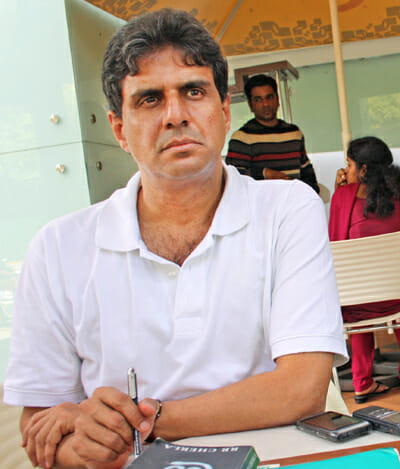 R R Cherla leads a product development team at a telecom MNC in the city. Devil’s Ether is his debut as author. Pic: Abhishek Angad

He says that quest to write a story about RNM came eight years ago and finally started writing it three years back, based on the backdrop of US government’s different legislations, post 9/11 terrorist attacks. Although, he says, that RNM is a far fetched idea, but doesn’t deny the possibility of agencies or government’s role of keeping eye on people.

The "Big Brother Is Watching You" concept from the novel 1984 by George Orwell, does not seem very far fetched, going by recent developments. The Indian government has reportedly decided to set up a central monitoring system, post the Radia tapes leak, to have access over phones without keeping the operators in loop.

Citizen Matters caught up with Cherla recently in a coffee lounge near MG Road. Cherla was dressed in white T-shirt and trousers. He is married to Purna Cherla-a civil servant and has two daughter pursuing undergraduate degrees abroad.

The conversation was on the growing threat to privacy in the name of national security. Edited Excerpts.

You have talked in your book about American agencies using technology to spy on citizens? How relevant is it today?

We know that post 9/11 terrorist attack, the US government got Homeland Security act and other legislations. It is an concerted effort to put people under surveillance and subvert any terrorist actions. But American Civil Liberties Union are fighting against it, suspecting that the government is pushing their own agenda on the usage of information in the guise of homeland security. RNM may be a far fetched idea but I am sure there are people who are researching on it. There could be something happening but not developed or matured as mentioned in the book.

Where does India stand? Can there be a agreement between some social media companies and Indian government for data sharing?

I think India has a long way to go. After the recent NE exodus, where social media was the part of the trigger, government is trying to monitor it. The Indian government now has ordered these companies to remove/block the accounts of the individuals responsible (for the exodus). So, unless there is a pressure from the government, the data is not shared. So it doesn’t imply any nexus.

In general, we use smart phones, emails, social media platforms etc. Do we need to worry that the agencies or the governments watch our movements at a global level?

Yes, we should. Knowingly or unknowingly, we are emitting data about ourselves, like visiting the last website, recent facebook status, web browsing etc. All that information can be traced. The capability to decipher any data has also been increased. For example, google analytics is used to analyse unstructured data, which can read deeper into the statistics. One can be in the disadvantaged position.

Companies like Himachal Pradesh based Shoghi and Indore headquartered ClearTrail are capable of listening to voices of the millions (on phones without service providers permission) basically to counter terrorism and exploitation. Does it also makes democracy vulnerable. Also, does it make India a global market for surveillance industry?

I don’t think it is a threat to democracy but there is a threat to privacy. These companies exist because they are dealing with the anti-social elements, that have become much sophisticated now. At the same time it may be used on people with no-wrongdoings to push different agendas.

India is also a hot market because government wants to have a control on surveillance with such technologies.

So what is intended to protect the citizens, may be used against them. How can the access to such information be restricted?

The government should build a framework to regulate the data accessibility. Secondly, we as citizens should use discretion in terms of what they reveal about ourselves while using social media like revealing location, and time with photographs. People should know that these can be picked up. Third, the social media companies too need to educate people about security measures.

We just need to limit ourselves in terms of revealing data. Some are not aware, some don’t care. At the end a user needs to be smart without overlooking the security assumptions.

One of the testimonial from one of the readers of your book says that ‘Facebook and Farmville are scary now’. He was referring to the applications that are plugged in facebook. Is giving these applications access to the facebook page a compromise again?

For millions of users, there are millions of applications. It isn’t easy to certify all other application. Companies should look at automated way for verifying. There will always be a threat surrounding this area. While it fosters innovation for new games, themes, and various other apps, there will be an underlying threat.

Does Bangalore have the capacity to be a hub of such activities?

It may be to an extent with the kind of technologically oriented workforce and infrastructure. Initially, I gave it a thought to set up the story backdrop in Bangalore. But post 9/11, when the US legislated the Patriot Act and Homeland Security law, the American Civil Liberties Union (ACLU) protested against government spying on innocent citizens and others; this provided the best backdrop to the storyline in US.⊕

Is it time the chicken came before the egg?

Or so says the Chief Minister B S Yeddyurappa when he presented the state budget a few days back. Read this article for a consolidated list of everything Bangalore has been promised.

Pedestrians face the most challenges in our roads. We are trying to tackle the issue rather than just complain. Our first programme will be on 20th April in Sanjaynagar.