Last year, state government got flak for promoting the teaching of Bhagavat Gita in schools. Activists and educationists had branded this as ‘saffronisation’ of education.

But, for decades, Hindu organisations have been promoting Hinduism in schools throughout the state. Prominent of these is Vishwa Hindu Parishad (VHP), an organisation that actively promotes Hindutva. VHP holds exams, competitions, sloka classes etc for schools in the city. Ramakrishna Mission in Ulsoor, and ISKCON (International Society for Krishna Consciousness), are other organisations that have similar programmes. However, such work has continued without getting the ‘saffronisation’ tag. 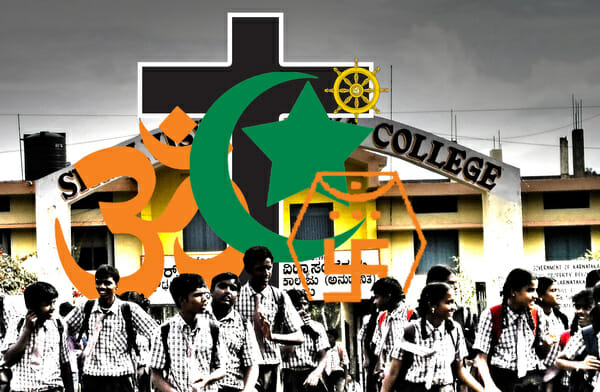 VHP has been holding exams in Ramayana and Mahabharatha for around the last 40 years in schools. D N Murthy, VHP General Secretary for South India, says that around 100 schools – government, aided and private – in Bangalore participate in the exam annually. The exams are optional, but participation is high. Across the state, around 45,000 students from 800-900 schools attend the exams. VHP sends appeals to participate, to 7000-8000 schools overall.

VHP also holds bhajan and sloka classes if schools approach them; however Murthy says that the number of such schools in the city is low. VHP’s volunteers in each area also approach schools nearby offering to take classes. Narayan Swamy, a VHP volunteer and retired DRDO employee, says, “I approached five schools in Kengeri, and two of them agreed for the classes twice a week. When I tell managements that Ramayana and Mahabharatha are part of our culture and has to be taught to children, they agree.”

Many schools that participate, do not have Hindu managements per se. VHP, an organisation banned temporarily in ‘92 for its participation in Babri Masjid demolition, had formed a Trust later for its activities to continue without obstruction. The exams are held by the Trust, named Bharatha Samskruthi Prathishtana.

International and Christian schools not approached

VHP’s Ramayana/Mahabharatha exams are three hours long, and is taken up by students in classes 8th – 12th. The exams are held in four languages, and toppers in different categories are given medals. Volunteers approach new schools as well to inform them about exams and other programmes – International schools and Christian schools are not usually approached. “These schools are usually not interested. In Bangalore, we may have around 500 workers – they approach 200-300 schools annually,” says Murthy.

Before the exams, VHP distributes Ramayana/Mahabharatha booklets to students to help them prepare; books that originally cost Rs 100 are distributed at the cost of Rs 25 each. Murthy says that the idea is to put children on the right track. “Children have to be taught their cultural roots, else they will go astray. There are consistent efforts by Christians to mislead them. Government has never interfered in this work, so we take their silence as support,” he says.

VHP also runs ‘Vidya Nikethan Centres’, which are spaces to study, for children from economically backward families, lagging in academics. Such children are identified and given tuitions in the centres. On Saturdays, children are taught slokas and bhajans. There are 10 such centres in the city now, JP Nagar has a few of them. About 350-500 children – mainly from 4th to 9th standard – come to these centres.

Seethalakshmi, VHP activist and former teacher who heads the centres, says, “Mostly children from slums, staying near the centres, come. Children from all religions come; but their parents are poor, and do not mind because children get all facilities here.”

Often, schools allowing the exams by organisations like VHP and ISCKON say that this should not be controversial because the exams are not compulsory, and that parents implicitly support this. They say that schools run by minority religious managements already teach their respective religions in their schools.

Nagesha N S, Principal at Bant Sangh RNS Vidyaniketan, says that the exams have been part of the education system for long. “VHP approaches us through the right channels. We only inform students about the exams and distribute texts. Children take the exam in a different centre. If the children are interested, who are we to stop them? As long as religion is not imposed, there is no need for worry,” he says.

Sir M Visvesvaraya PU College in Old Airport Road allows value education classes by ISKCON after school hours. Children are taught Bhagavat Gita in the classes. Shyamala Jogaiah, Principal of the college, says that the classes are not explicitly about religion, but about values. “Most children in the school are from poor families, and they take up such opportunities because of their inquisitiveness. Parents allow them to stay back for these lessons and take part in exams, because they support it.”

The Principals, however, say that groups belonging to other religions do not approach them; nor will it happen. Nagesha says, “Religion is a controversial issue. We are open to other religious groups approaching with similar programmes, but we will be able to decide on this only based on parents’ reactions.” Schools without obvious affiliations are also known to teach children to chant slokas and bhajans, right from pre-primary classes.

Is a secular education free of religion or a union of all?

The ones that have obvious religious affiliations, openly propagate their respective religions. Generally it is not easy for children to opt out. These schools say that the management of every school has the right to decide on whether religion can be taught, which one and how.

St Joseph’s Boys High School has Catholic prayer sessions for Catholic students once a month; these students also have to attend religious sessions three times a week. Students belonging to other religions need not participate.

Fr Celestine Sera, Principal at the school, says, “We are a minority school, and it is a given that Catholic children will be exposed to their religion. Parents admit their children here because they know and appreciate that religion is taught. It’s not just us – Hindu and Muslim schools also teach their own religions.”

For non-Catholic students, the school has religious sessions three times a year. Students are separated by their religion, and have to attend the sessions and prayers of their own religions. All religious sessions are compulsory, especially for Catholic students; if a child does not want to participate, parents are asked to give the reason for this. “If there is a satisfactory reason, we will allow exemption. But usually all children participate,” Fr Sera says.

There are also Christian schools like St Mary’s School which do not teach religion. Only the morning prayers in St Mary’s School are Christian prayers. Carmel School of Banashankari does not have religious affiliations, and has a policy of not encouraging religion in the school.

Principal Sribala S says that the school is secular and that hence religion is completely avoided. “We do not celebrate any religious festivals, but talk to children about one major festival from each religion, every year. Since the school is located in a Hindu majority area, some children have the habit of chanting slokas before lunch. Over the years, the teachers have been holding Saraswati Pooja before distributing board exam hall tickets. We allow but do not actively encourage these, and do not force children to attend.”

While some schools define secularism this way, for others secularism means just the opposite – to give children the choice of studying their own religion.

Sujata Khadabadi, Principal at SAAMAR Islamic International School, says, “Religion is an important part of education; but it is wrong to not teach it at all, in the name of secularism.” At SAAMAR school, all students are Muslims, and Islamic education is mandatory and part of the curriculum.

“Since this is a Islamic school, only Muslims come here. In common schools, children can be separated by their religion, and taught their respective religions. Children who are not interested can simply attend general moral education classes,” says Sujata.

The educationists Citizen Matters spoke to, disagree with this point of view. They say that the Constitution mandates a clear separation between state and religion, and hence religion should be a private affair.

Ashok Kamath, Chairman of Akshara Foundation, says, “There is no need for any guidelines on religious teaching, we only need to turn to our Constitution. School is a public place; there is no need to complicate things by bringing religion there. It can be distressing to children.”

Another opinion is that government should actively control the curriculum, avoiding indoctrination. Niranjan Aradhya, Education Consultant at Centre for Child and Law in NLSIU, says that NCERT and DSERT – which design school curriculum – should be involved. “These bodies and their experts are there so that a common curriculum can be designed, and public can take their objections to government. The values of all religions can be included, without focusing on specific religions,” he says. Aradhya is also an advisor to state government on policy matters in education.

Aradhya says that it is difficult to say what counts as indoctrination, and hence all religious teachings beyond school curriculum should be stopped. “This is possible if government takes a stand, and good bureaucrats are appointed. Section 29 and 30 of the Constitution does allow minorities to promote their culture, language etc., but to what extent this can be done is the question. Even in the case of minority institutions, if they are found to indoctrinate children, their recognition should be withdrawn,” he says.

Parents do not see a problem

However, parents of school-going children seem to support religion being part of schooling, but not too much of it. They say that one specific religion should not be imposed on children. Soumya Muralidhar, whose children study in GEAR International School, says that schools should teach about religion and festivals since parents do not have enough time for this now a days.

She says, “With both parents working, children would not get to learn about religion and values unless schools teach them. But school managements have their own decisions about how much weightage should be given to each religion, and usually parents and teachers don’t have a say. So there can be some guidelines from the government so that all religions get equal weightage in schooling.”

Ravi Shankar Raman, whose child studies in New Baldwin School, says that religious teaching in schools is a non-issue, and has come to the forefront only because of some vested interests. “Many schools have prayers of a particular religion only, and parents know this. They don’t mind because ultimately they only look at quality of teaching and facilities in schools.” He, however, opines that there should not be in-depth sessions on religion as it shifts the focus of schooling itself.

Raman is also CFO at Synergy School Systems, a consultancy that help investors manage and run schools. “Usually investors who want to start a school will have ideas about how religion should be included. Our clients have been Hindus, and as per their idea, we have included Hindu slokas and prayers during the morning assembly in schools. Parents have never had any issue about this.”

Shyamala Jogaiah of Sir M Visvesvaraya College puts it succinctly when she says that religion is never going away from the education system. “It is with the idea that religion is acceptable in schools, that every religious group is permitted to start schools. How can religious teachings be controlled then?” she asks.⊕

When and how to find a COVID bed in Bengaluru?

How to organise a COVID vaccination drive in your apartment

What BBMP’s budget holds for the ordinary Bengalurean