Early in the morning one may notice people sweeping their front yard, and then accumulating the leaves and other waste on the pavement. Yes the houses are clean, but the roads are a mess because of us. In a society that has high regard for cleanliness, we have yet to understand that cleanliness is not just inside our homes, but on the road as well. Drive down any city road and every corner is littered with massive amounts of garbage. Unsegregated waste just put into plastic bags and chucked on the road. 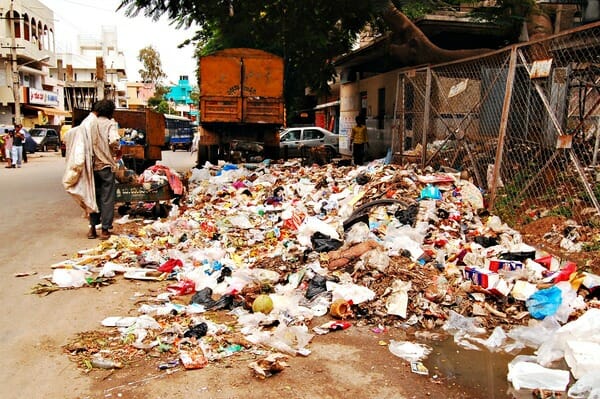 The city has five dump yards, Mavallipura is one of them. For years humungous garbage piles from Bangalore city, are disposed  off unscientifically at the dump yards run by Srinivas Gayathri Resource Recoveries (at Mandur) and Ramky (at Mavallipura).

In a study conducted to access the environmental impact assessment of the dumping yards on the city’s outskirts. Research scholars from Bangalore University’s environmental science department, found dump yards to have an adverse effects on the lives of the villagers. The hazards posed to the lives of the villagers include high chemical contamination of underground and surface water besides severe air pollution caused by the piles of waste dumped at the yards. Researchers also found high levels of methane gas trapped in the water in form of bubbles which rise to the surface and escape into the air. This is the very water and air used by the villagers. The study also found high concentrations of hydrogen sulphide and nitrates.

The heart of the dispute is the desire of BBMP to continue dumping garbage at Mavallipura. A recent argument between the BBMP officials and the residents of Mavallipura went like this.

BBMP: Garbage will be disposed off scientifically. There will be no health or environmental hazard. It is totally safe.

Villagers: If your method is indeed harmless, why don’t you dispose of garbage at Palace Grounds? You will save on the cost of transporting garbage to the landfills on outskirts.

BF Patil, joint commissioner for solid-waste management, and deputy mayor L Srinivas said they would ensure garbage is disposed scientifically at Mavallipura. Further importance would be given to the environment, including groundwater. To this, villagers retorted that if the officials are so confident of the harmlessness of a ‘scientific’ dump yard, it can be started in the city itself.

The villagers presented their idea of using palace ground to dump Bangalore’s waste.  A dump yard at Palace Grounds will help: as garbage will not need to be transported to the landfills on the outskirts of the city. The BIA Road (which leads to the landfills) will be litter-free. A clean BIA Road would impress visiting foreigners.

It all boils down to the discussion we had earlier. All that matters is that our houses are clean; the road can be dirty, Bangalore needs to be clean; Mavallipura can be dirty. Civic authorities say the backlog of over 10,000 tones could take at least two days more to be cleared up, until then; Bangalore will continue to pay the price. If only scientific waste disposal was taken up earlier, the by-lanes wouldn’t have raised a stink.

The stink is caused by leachate, which is generated from liquids existing in the waste, hated by us loved by plants. The Natural ecosystems provides us with methods of converting waste to manure, the decomposers found in the food chain break down natural organic waste and turns it into humus, the organic component of soil.

Composting is a process of decomposing wet waste. People who know of composting consider it necessary and can be scientifically done in every one’s homes and back yards. Recent concern about managing waste and producing organic food has led to an interest in, backyard composting.

As city dwellers it is time we take responsibility for our garbage. Segregating waste into organic and inorganic waste is the first step. For those of us who do not have time, you must consciously make the time! The BBMP may have learnt valuable lessons from this episode, or so they say. However, this is a problem which will persist for as long as we have learnt from it. Aldo Leopold said. “We abuse land because we regard it as a commodity belonging to us. When we see land as a community to which we belong, we may begin to use it with love and respect. Let us not blow our planet Earth! It is the only planet, and planets that humans can live on, as research has shown us is near impossible to find.⊕

About Mark Rasquinha 1 Article
The author has not yet added any personal or biographical info to her or his author profile.

In the early 80s, the city had abundant ground water available just a few feet below the ground. Today, borewells even below 600 feet are a failure.