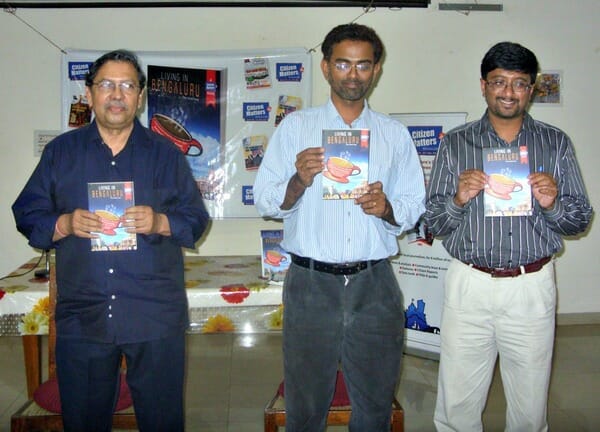 The guidebook is published by Oorvani Media, which is also the publisher of Citizen Matters. The book has step-by-step guides, FAQs and information for getting things done in Bangalore. It has chapters devoted to public services to property matters, school boards to driving licenses, voting to saving water to filing FIRs and more.

This is the third such event, related to the book.

Justice Hegde spoke on his experiences as Karnataka Lokayukta and the role of an Ombudsman in a democracy. He showed the true face of democracy and what it was supposed to be, where the people have no say in any of the laws or decisions made. He said, “If at all anybody is superior, it is we – the people. They (government) are public servants, not public maaliks (bosses).

The book is available at all major independent and chain bookstores in the city. Details are on the web at living-in-Bengaluru.

For more details about the publisher Oorvani Media and Citizen Matters, please call 080 4173 7584 and ask for Raghavendra or Satvik.

Vijayaraghavan spoke on the apartment registration laws and acts that was quite helpful for the citizens. He said, “The problem here is, there are laws. But they are not implemented properly.” He further added that they came to know of these acts only after filing an RTI and going about it for months to figure out who governed the apartment acts.

The audience interaction with Justice Hegde and Vijayaraghavan was quite lively and ranged from city governance, to politics to apartment laws and of course, the book.

Over 70 people attended the book launch and 50 of them bought the book right after.⊕

Life, after the expansion of Avenue road in the heart of Bengaluru, will never be the same again. Vivek Vaidyanathan writes and Deepa Mohan photo-documents a heritage walk down this well known road.