I am an illustrator and a comic book fiend and I am going to wax eloquent over Bangalore’s first ever Comic Con that happened on the 8th and 9th of September at the Koramangala indoor stadium. Why such excitement over an exhibition of books that are ‘meant for children’ you ask? Simple, it’s because people have realised its not only meant for children. 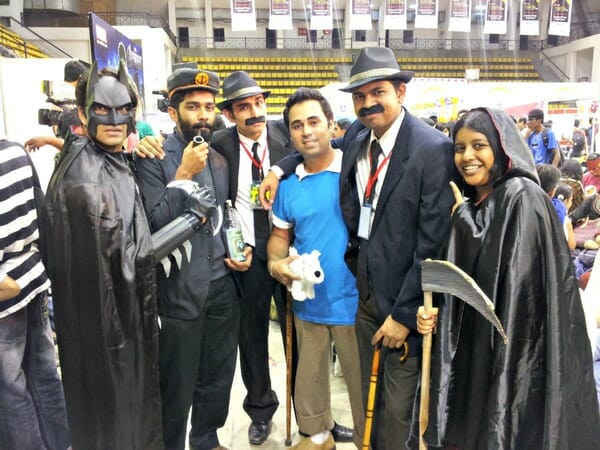 Only here could u see the Tintin crew chillin with the Grim reaper and the dark knight! Pic courtesy: Varsha S Chakkera

That’s the beauty of an event like the Comic Con, all misconceptions people have about comics – it is meant for children, is there a ‘career’ in something that’s meant for kids, my kid draws really well so he can become a comic artist if nothing works out – are broken. People can actually see the amount of hard work that goes into making just one issue of a comic.

Another boon that a Comic Con grants us is that it brings all these graphic art studios and comics publishers together under one roof. So the amazing stories that might have gone unnoticed, get their much deserved attention and fan following.

It is high time that India, which is recognised worldwide as storyteller of epics, showcased new kinds of epics, that take us to new frontiers of our imagination. And the best part is these epics now come with beautiful illustrations.

Events like this, also tell people that a superhero in tights is not the only thing you find in comics. You can find stories of every genre, everything from crime to action to romance to fantasy to biographies.

If you still haven’t gathered what a Comic Con is, well, to put it simply it’s a place where you can let loose your inner fanboy/fangirl with all the comics that surround you, wear a costume of your favourite superhero and be treated like a celebrity for it.

It is high time that Bangalore got to host the event, considering it kicked off in India last year, with Delhi and Mumbai getting to host it. This city is a melting pot of people from all over India with a vibrant comic book culture. We’ve had our own share of superhero fan worship with all the American comics and Japanese manga we get here.

The madness of the Con began way before the 11am inauguration, when all the stalls were being set up. The Koramangala Indoor stadium was being converted into a maze of stalls with people trying to get the entire stock (treasure!) into their allotted stalls. On the other hand there were people trying to find a place where they could secretly transform into a character of myth and magic away from prying eyes.

People were greeted at the entrance by a smiling comic character and were given a band to remember the event by (free entry of course). Once you entered you were immediately greeted with a stall with every kind of DC and Marvel merchandise you could want and the great Master Yoda telling you that the ‘force wants you to buy!’

Many publishers such as Level 10, Manta ray, Rudra Matsa Entertainment, Chariot comics, Campfire and many more had set up shop. But the highlight of the Con had to be the releases of nearly 20 new titles! Templar, Campfire’s Steve Jobs, Battu Gaiden, and lots more. 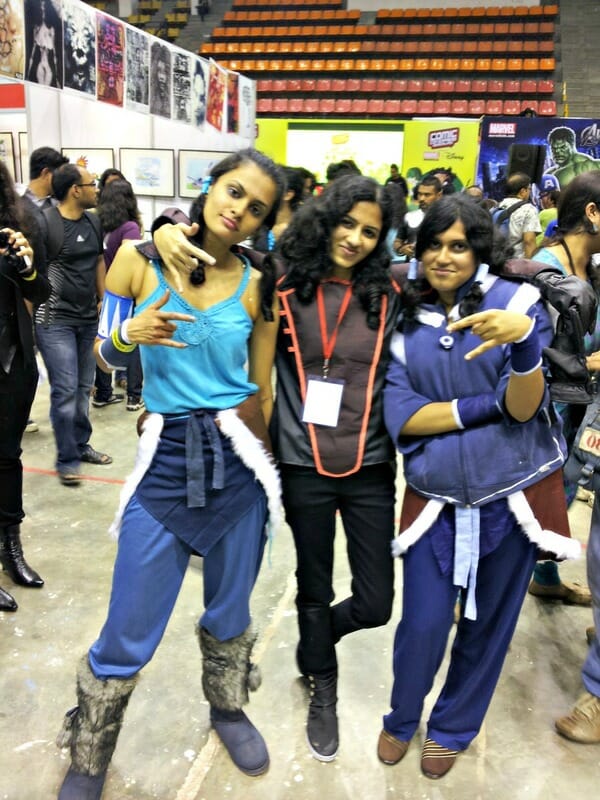 Other than original titles there were also stalls which sold DC and Marvel titles such as the Xmen, Wolverine, Batman and many more. What added colour to the event were the people in costumes, everyone from Superman to the Watchmen to Spidy seemed to be there and people were having a blast taking pictures with their favourite superhero. It was a special surprise when Nickelodeon’s Dora the Explorer and Ninja Hattori came to visit the Con!

But books and superheroes were not only the treasures found; a huge range of quirky buttons, t-shirt art, notebooks, transformer shaped pen drives, mugs that taught you how to wear a saree or tie a lungi, caricature posters and many more such novel items were in plenty and tempting.

There was also a special display of Covers of nostalgic old titles such as Bahadur and Phantom along with our very own Big B’s superhero comic titles.

With the Con being such a success we hope that the next time will bring us more workshops and talks from the magic makers of the industry to help spread the word, love and true understanding of this humble and quirky comic book world.

Having an exhibition of this scale will only encourage more publishing houses to come up which will in turn give much needed encouragement to a host of writers and artists that are just waiting for an opportunity to showcase their talents.

Who knows, maybe one day we can boast of a comic culture that rivals that of the west!⊕

About Varsha S Chakkera 1 Article
The author has not yet added any personal or biographical info to her or his author profile.

A group of youngsters are walking for over 5000 kms across India urging citizens to be honest. They will walk in Bengaluru on January 8.

Save Lalbagh’s fish before their last gasp

Large numbers of fish have been found gasping for air in Lalbagh’s lotus pond, occupying all open surfaces of water. Suffering from a lack of availability of dissolved oxygen, it is unclear as to how much longer they can survive, if no action is taken.

CAT said that the charges against Sharma were trumped up and also instructed government to assist BMTF in its work. It also directed the task force to issue weekly statements on its investigations to public.