Two young professionals  from the city, Saikat Sarkar and Joanna Banerjee, used social media platform to vent their frustration about being allegedly humiliated and even manhandled by Bangalore Traffic Police a week ago.

City’s dailies, picked up the story when their ‘notes’ went viral. The 26-year-old woman’s note was extensively quoted in all the news reports, however she says none of the journalists contacted her to ask for permission or verify any of the facts. Nobody contacted 27-year-old Sarkar, either.

Even the Bangalore Traffic Police, took cognisance of the two people’s notes and promised action on its Facebook page. 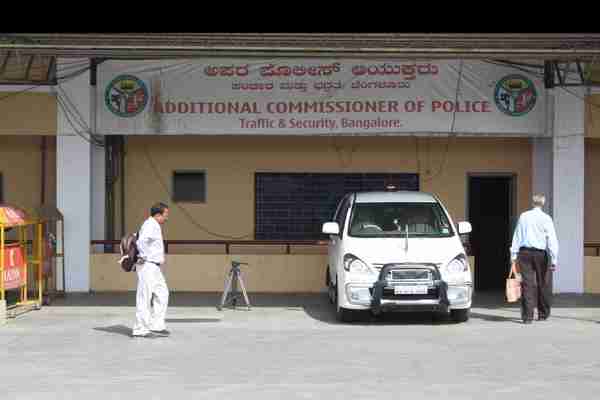 Though reluctant to file a formal complaint after the incident, Sarkar and Joanna got some support in an army official who went through the similar harassment from the same police official. The two have now submitted a written statement to the IGP & Additional Commissioner of Police (Traffic), Bangalore City and the Deputy Commissioner of Police(East) on 11th September against the police who allegedly assaulted them.

On 5th September, Sarkar who was driving with his colleague Joanna at the pillion, was caught in drunk and driving case in front of Hasanath College for Women near Dickenson road.

Sarkar does agree that he, was indeed driving after consuming alcohol. But the trouble started when the constable present, Govindappa, refused to accept Sarkar’s licence saying West Bengal’s licence was not valid in Karnataka and that he should either produce one issued in this state or an International Driving Licence.

Joanna says the trouble got worse when Sarkar lit up a cigarette. "This drew the ire of the Hitendra M S (Assistant Sub Inspector, Shivaji Nagar Traffic Police Station), who started hitting Saikat . We raised our voices but other police (officials) also joined and started hitting him (Sarkar)."

She goes on to add that she was told in not so polite words that a woman shouldn’t be speaking up. "Hitendra raised his fist and threatened to beat me and also abused me in Hindi," she says.

Realising the situation is going out of the control, they both took an auto and fled. They rushed to lodge a complaint against those policemen. While no one heard them at Frazer Town and Shivaji Nagar traffic police station, Commercial street traffic police station listened to their complaint, but did a ‘U’ turn when Constable Govindappa and Head Constable R T Raju, showed up there.

They were asked to sign a document written in Kannada despite both of them explaining that they did not know the language. Eventually they did not sign the documents.

They were then taken to the Bowring and Lady Curzon Hospital, Shivajinagar, for blood and urine tests. Both of them were taken aback when the doctor revealed that that the police is planning to register a complain against them, for creating nuisance under the influence of alcohol. Sarkar says, "Initially we thought the police was writing a report based on our complaint but this was the opposite. How can they charge us without even letting us know."

The two then fearing danger, decided to drop the idea of filing a complaint. "We had an option to go ahead with our weakened case or write an apology to the police . We chose latter as we could not afford to take a legal recourse," says Joanna.

On Friday morning, Sarkar met Hitendra at Shivaji Nagar Traffic Police Station to collect his bike. According to him, the ASI used foul language and spoke badly about his colleague before letting him go. He adds, "He also charged me Rs 1500 without giving me a receipt."

Six weeks ago, on July 19th night, an army officer, who wished not be named, faced a similar situation. He was also harassed by Hitendra M S at the same place. He spoke to the Citizen Matters and said that even though he hadn’t consumed any alcohol, the breathalyzer showed him as a drunk man.

"I then asked the cop to test it again citing technical glitches but they refused to do so. I asked them to take my blood and urine test to authenticate. Inspite of (my) co-operating they confronted me, and tried harassing me," he recalls.

The situation eased out once the police realised he was an army personnel. Hitendra, the army personnel claims, apologised for his behaviour. Though the army personnel did not take any action then, after reading about Sarkar and Joanna’s case, he decided to step in. "I managed to teach (Hitendra) him a lesson because of my position but the civilians have to face a lot of problems, " he says.

M A Saleem says Deputy Commissioner of Police(East), Lokesh Kumar is inquiring into the matter. "The statements have been taken and after our investigation, the report will be shared on our facebook profile," he adds.

In this particular case, Sarkar and Joanna both made their notes public, but they had no intentions of going to the mainstream media at that time. However leading media houses did pick up the story and neither of them were contacted to ask for permission or verify facts.

Joanna, upset over the way the story was playing out in the media, sent an email on 11th September, to some media houses in Bangalore requesting not to publish any article on this issue without her consent.

"They (journalists) should speak to us first. None of them spoke to us. One of the newspapers even distorted some of the facts," she says.

She however adds that she is happy that the issue has been highlighted in the media.

Ammu Joseph, an independent journalist based in Bangalore, says that single source stories are already a problem and there should be a complete overhaul in the way news reporting is done.

She concedes that anyone who posts content on social media platforms weakens their argument for the right to privacy since they surely know that such material can be shared, go viral, etc. But there is still a question of professional standards and ethics, she says.

"Rehashed stories and lifted quotes — from social media or anywhere else — can’t be passed off as reporting: without any professional input there is no value addition. An incident recounted on social media may trigger an idea for a story but journalists have to put in some work before it can become a real, professionally acceptable story," says Ammu.

For now both Joanna and Sarkar have removed their ‘notes’ so as to not influence the inquiry.⊕

Ms Meena, back in Bengaluru

Comic situations and characters abound, and witty dialogues and songs in the “smattering of tongues” keep the audience regaled. Adding to the magic is the way the stage and props are used.