116 years old and Elgin Talkies still stands strong. It all started in 1896 when the Lumiere brothers introduced cinema to India. From there on, there was no looking back.

Elgin converted to a talkie in 1930 and was packed to the brim with movie buffs eager to watch Marilyn Monroe or Sophia Loren. Oblivious to the history around them, hundreds of people still throng Elgin, only to watch Hindi films from the nineties, at 20 rupees per ticket.

Hidden behind the market chaos is what remains of a grand structure called the Himalaya talkies. One of the many cinema houses in the Majestic area, Himalaya saw an untimely end much before multiplexes came into being.

The hall is now rented out to sell clothes, but the film projector hidden behind broken doors still remains to stand witness to the thousands of regional films that were shown there decades ago.

70 years of history came to an end in 2005 when Plaza cinema was sold (reportedly at a princely sum). Not so many years ago, a movie at Plaza, bhel on MG road and then cup of coffee in India Coffee House was the routine on weekday afternoons when college just had to be skipped. 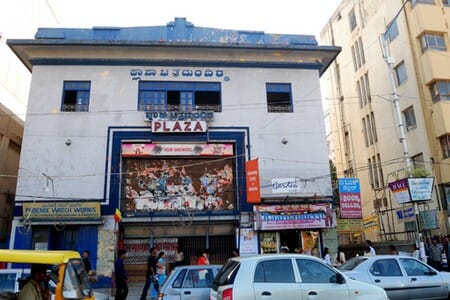 The building still stands. After a journey from four anna tickets to 70 Rupee tickets, Plaza gave in to the multiplex.

Shivaji Talkies used to be one of Bangalore’s most visited talkies and was strategically placed on one of the busiest roads of the today, JC road. The road used to be a popular haunt for movie lovers with three halls, Minerva, Bharath and Shivaji within walking distance from each other.

Today the only remnant of that haunt is the statue of Shivaji sitting majestically on his horse. Part of the building has been demolished to make way for a modern office complex, while the other half is now being used as godown to store soap. The grafitti on the old walls of this half take you back in time when young couples scribbled on the walls and leaned against the well carved railings.

About Amoghavarsha JS 3 Articles
The author has not yet added any personal or biographical info to her or his author profile.

For holidays off the beaten track

Concept tours and short breaks are gaining ground in Bangalore. From history to photography, there are diverse interests to explore.

The Wall: A lesson in community building

A neighbourhood art project reveals all that can be achieved through community involvement and commitment.