The deadline for clearing the garbage set by the newly appointed BBMP commissioner Rajneesh Goel ended on September 3rd, 2012.  But where is the garbage going, considering only Mandoor landfill is operational right now? 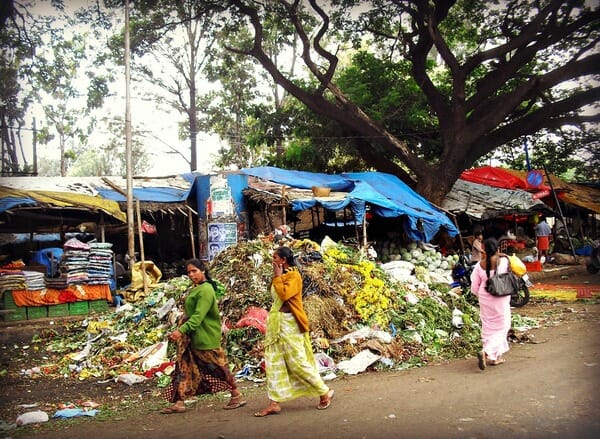 Mayor D Venkatesha Murthy said, “We spoke with Mandoor villagers and they have agreed to dump the waste in Mandor landfill.”  He expects Mavallipura villagers to agree for dumping the waste in the landfill there. BBMP plans to hold a meeting shortly.

Though BBMP has given a green signal to dump garbage at Mandoor landfill, the contractors are scared to do that. “We are dumping the waste in Mandoor only at night as we are fear the villagers may attack us,” says Krishnappa K S, a contractor.

No landfill in Bangalore

Nobody wants garbage in their backyard; this has resulted in the shutdown of all landfills in Bangalore. Contractors and truck drivers are running across Bangalore in search of a suitable place to dump garbage. Garbage clearing process in Bangalore has almost stopped due to the resistance from the people living near the landfills.

Last week when even Mandoor was not an option, trucks filled with garbage just stayed put in the city. Madiwala Market road was impossible to navigate with piles of garbage on the road and reeking of rotting garbage as the garbage filled trucks were parked right there.

Truck driver, Venket Swami N, said, “We have loaded our trucks five days ago and couldn’t dump the garbage anywhere. Due to this we are unable to collect garbage from the market anymore.”

The contractors on the other hand blamed BBMP officials for their inability to find suitable landfill for dumping the waste. “We asked BBMP several times for suggesting us a place to dump the waste. What can we do? If we go with garbage to the landfill, people may attack us,” says Nagaraj K, a contractor.

Bangalore produces around 4000 ton waste per day. But where is all the waste going?

BBMP took a decision to close the Mavallipura landfill on August 29th, 2012, due to the resistance from the villagers. The particular landfill located near Yelahanka was operated by Ramky Infrastructure Private Limited. BBMP sent around 1000 tons of garbage every day to Mavallipura Landfill. Whereas the landfill had the capacity to process only 600 tonnes per day.

The other two landfills located at Mandoor were also closed down a week ago, due to resistance from the public. One landfill is operated by Sreenivasa Gayathri Resource Recovery Limited and the other by Terra Pharma Bio technology pvt ltd.

Gundlahalli landfill in Doddaballapur is also at the verge of closing down. Villagers have been protesting against the dumping of waste for over a week. The particular landfill is being operated by Terra Pharma Bio technology pvt ltd. It has the capacity to process 1000 tonnes garbage per day.

Many landfills across the city are just that. The waste is not processed and have been closed down due to the resistance from the people living nearby.

The landfill at Subbarayanapalya near Kumbalgodu was closed down in the beginning of August, this year. For the last eight years, the BBMP used to dump around 200 tonnes of garbage every day in an eight acre plot there.

In 2006, BBMP identified a 30 acre land at Kannahalli village off Magadi Road for dumping waste. But due to the protest from the villagers, it closed down three years ago.  However, Palike’s latest budget has allocated money for a power generation plant at Kannahalli. Why is budget allocated when the landfill has been shut down?

BBMP requested Anekal Taluk office for a land to dump waste from the city, in 2008. It was sanctioned a 40 acre land at Bagganadoddi in 2011. “But due to the protest from the villagers they couldn’t dump more than eight truck loads of garbage in Bagganadoddi,” says Shive Gowda, Tahasildar, Anekal Taluk.

Electric Vehicle charging stations and smart parking to be introduced soon, Ola taxis banned, and revelations from a surprise inspection of Varthur lake – read on for a recap of Bengaluru news this week

The basics of babyproofing

New parents get advice from every corner on keeping the baby safe. How far do you go?

“I will never commit to any party”