Given the current garbage situation in Bangalore, it is interesting to take note of the future generation’s perspectives on the same. Around 2,000 civic club members from CMCA (Children’s Movement for Civic Awareness) voiced their opinion on the whole issue and students from 50 schools signed and submitted a memorandum to Shankarlinge Gowda, the then commissioner of Bruhat Bangalore Mahanagara Palike (BBMP), on August 3rd. 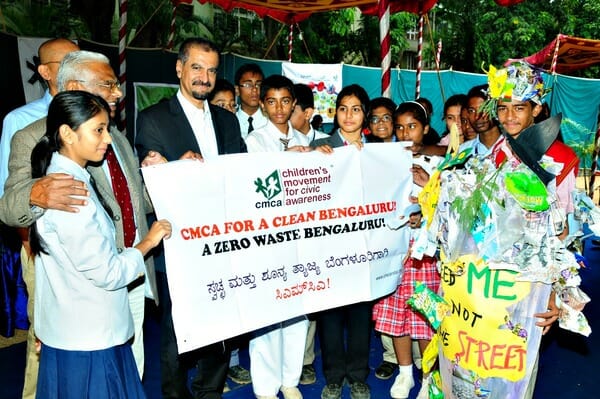 They made a fervent appeal to the Bruhat Bengaluru Mahanagara Palike to implement an effective solid  waste management system for Bengaluru by:

The children promised to stop the complete usage of polythene bags and littering. They also said that they would educate others around them to be sensitive to the problems and conditions of Pourakarmikas and treat them with respect and dignity.

CMCA is a 12 year old civil society organisation which runs an innovative civic club program across 6 cities and villages in Karnataka, to inculcate civic and democratic values in children. For more details visit www.cmcaindia.org⊕

About Priya Krishnamurthy 2 Articles
The author has not yet added any personal or biographical info to her or his author profile.

A little bit of ‘Khichdi’ amidst Rajinikanth’s ‘Endhiran’

This week science fiction comes alive with Rajinikanth-starrer ‘Endhiran’. Also on offer for the first time, television serial ‘Khichdi’ on the big screen.

How Mayor can help Bengaluru with clean water and lakes

Most STPs in Bengaluru are dysfunctional due to many reasons including use of inappropriate technology, incorrect design, faulty engineering, poor operation and maintenance.