“I feel like relocating to a different place. I will probably sell my house,” said a depressed, rather scared 70-year-old H N Pattabhiraman, a resident of  BTM I Stage, 9th Main, since 1992.

Like Pattabhiraman, the other residents too live in fear. They feel helpless in the face of deteriorating law and order situation, they do not have much confidence in the police either. 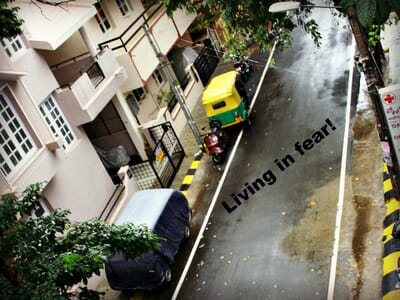 The reason for this fear is the constant trouble created by miscreants and police inaction. The residents have to bear the brunt of motor-bikers drag racing with modified silencers at night, theft cases and rampant illicit smoking and gambling in the neighbourhood.

Pattabhiraman says, “Small children wake up to the loud noise generated by the modified silencers of the bike. I too am a heart patient. It has been troubling us for a long time.”

He says that despite his warning the men repeatedly, they deliberately ride around this area. He says, “They indulge in brawls using foul language, if you try to stop them.”

Pattabhiraman is also the secretary of the Resident Welfare Association (RWA) of Maruthi Layout in BTM I stage. He says that he has complained to the police about the matter but in vain. He added, “The police asked us to get hold of the miscreant and call them. But is it possible for an old person like me to catch them (miscreants)?”

Recently Citizen Matters published an article about a woman who was stabbed on her arms in BTM 1st stage. Though the criminal is in the jail, the parents of the victim fear once he is out, it will be a big problem for them. C M  Narayan, father of the victim says that the area is infamous for such activities.

He says that the women wearing gold chains can’t walk peacefully in this area. Even his wife was a victim of chain snatching, a few years ago.

On the stabbing case, the police earlier said that since the accused was in an intoxicated state at the time of committing the crime, and he may not be held liable for the crime. But Narayan argues, “Many (such trouble makers) will be set free and we will be troubled later. What is the solution?”

The residents complain that that some miscreants, use public roads to smoke pot and gamble. Whenever the residents try to stop them, they retaliate by throwing stones and breaking window glass panes.

An aggrieved resident, Prashant Bhargava says they broke his car’s windshield as his mother sometimes scolds them. He says, “Despite telling them so many times, they continue to litter the place in front of our homes. They are dangerous, we can’t involve ourselves in fights with them.”

He feels it is the police’s responsibility to step in and protect them.

A watchman of a nearby apartment, wishing to remain anonymous, says that the miscreants make his job difficult. But his employer insists he not confront them. “The building owner says not to scream at them, just make them understand and let them go. May be to de-escalate the situation,” he adds.

There have been frequent cases of stolen laptops, mobilephones, petrol from bikes or whatever left unguarded in this area. Abhijeet Anand, who stays in a rented house in this area says that his motorbike tyre was stolen few days ago. He says, “I parked my vehicle outside my home at night and in the morning I find the rear tyres missing.”

Two months ago his mobile phone also was stolen from his home at night. Another resident, parks his bike inside the house for fear of theft.  There was also a car stolen, three months ago, from the same area.

Residents claim that the miscreants are mostly from the neighbouring Gurappana Palya. The accusations even take on communal colours. Some say, the miscreants are muslims, some think they are hindu. However one resident says, “These people are in the age group of 15-20, mostly lower income group belonging from both hindu and muslim community.” – However Citizen Matters hasn’t been able to independently confirm this claim.

What the authorities say

The residents have complained to the authorities many times, but no action has been taken so far. They even complained to the MLA, Vijay Kumar (BJP) of Jayanagar Constituency, at a public meeting four months ago.

Pattabhiraman added, “In that meeting, police clearly said that they don’t have enough manpower to patrol this area regularly.”

Residents can mail DCP Harsha on issues like this at dcpsoutheast@ksp.gov.in.

The MLA agrees that the problems exist and the lack of police personnel is an issue. But he  assures, there will be action.

The police on the other hand, do not think this is a serious problem. Inspector Mohan Kumar of Mico Layout police station, under whose jurisdiction the area falls, says whenever there is a complaint, they do address it. Residents however do not agree.

The residents do not want to put their names down on a formal complaint for fear of retaliation.⊕

At a time of scams and crisis, one of Bengaluru’s well known personalities says, ours is a great city. Really? Let’s find out. Meet Mohandas Pai, Vijay Thiruvady, Prakash Belawadi and Pawan Kumar this Saturday at 12 noon at the Bengaluru Book Festival, Palace Grounds.

It was a mix of lessons in social justice, equality, sustainability, citizen involvement in civic issues and politics of development in cities, not limited to Bengaluru, in addition to the culmination of the symbolic no-vote collection drive.