The scene is almost identical each time. Whenever anyone sees me at the lake — and if they know that I am part of the team responsible for the lake being rejuvenated the way it is — they come to thank me first and then quickly proceed to offer me advice on the BBMP and the government. “Don’t trust them”… “they are a bunch of crooks,”… “Don’t get further involved with the government.” 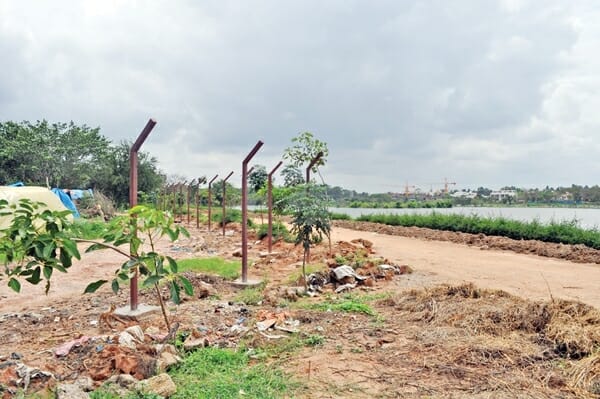 I tell these people that this lake could not have and would not have been rejuvenated the way it has, had it not been for some very receptive officers at the BBMP. But no one waits to hear me out.

When we got in touch with the BBMP almost four years ago and asked them to rejuvenate Kaikondrahalli lake in an environmentally sustainable, socially just and economically viable way, we didn’t think that we’d get very far.

But then we did! The way this lake has been rejuvenated is one of the success stories of Bangalore. We often get calls from the media and from people in other parts of Bangalore who want to know how they should go about asking the government to rejuvenate lakes in their neighbourhood.

It took several calls, emails and visits for the authorities to take us seriously. But when they saw that we wouldn’t go away they had to deal with me, Ramesh, Rajesh and others and deal with the proposal we took to them. They could have shut us out, as governments often do to citizens, but perhaps we were tenacious enough or perhaps the officers were good or perhaps it was a combination of both.

This is not to say that there are no problems with the way the authorities have dealt with the Kaikondrahalli lake. There are three major issues that have not been addressed properly. A part of the fence needs to be replaced. But this is proving to be tricky because some vested interests are trying to force the officials to sacrifice some of the land belonging to the lake. Also there is a Raja Kaluve, that has been encroached. And then there’s the massive amounts of sewage that is gushing towards the lake from Kasavanahalli village, waiting to breach the barricades the citizens have set up. There has been no satisfactory solution from the BBMP or the BWSSB.

At times, it has been an uphill battle and it would be easier to throw up our hands and say that the government will not do its job. But if we did, then it will be easy for them to fulfill our expectation and do nothing!

It gives the government a free pass, letting it off the hook. If all of us, individually and collectively, hold the government responsible for doing its job, then those in power will have to perform better.⊕

About Shubha Narayanan 5 Articles
A resident of Bellandur in Bengaluru and a film maker.

This week’s scan of Bangalore’s Kannada dailies includes a number of reports from Dasara to big retailers like ITC, Big Bazaar trying their hands in pushing carts.