rafiki is a theatre group from Bangalore. Established in 1998, it comprises a group of youngsters working in the fields of theatre, with particular focus on socio-economically backward street and working children in the age group of 7 to 14 years.

Woyzeck is a German play written by Georg Buechner set in Prussia in the 1830s. I had watched one version of Woyzeck staged by Koothu-p-Pattarai of Chennai, at Ranga Shankara, sometime ago. When I realised that rafiki was staging it at Ranga Shankara, I was compelled to watch the new performance too. I was very glad I went. The two theatre groups had completely different interpretations of Woyzeck, and it felt as if I was watching a different play altogether!

Anmol Vellani, who adapted the rafiki version of Woyzeck, conceived of the play itself as a fragment, depicting the last fragment of Woyzeck’s life, because "Georg Buechner, dead at 23, left behind an unfinished manuscript of the play…".

Margaret and Marie in the play (Pic: Deepa Mohan)

The story runs thus in the original:

Franz Woyzeck, a lowly soldier stationed in a provincial German town, is the father of an illegitimate child by his mistress Marie. Woyzeck earns extra money for his family by performing menial jobs for the Captain and agreeing to take part in medical experiments conducted by the Doctor. As one of these experiments, the Doctor tells Woyzeck he must eat nothing but peas. It is obvious that Woyzeck’s mental health is breaking down and he begins to experience a series of apocalyptic visions. Meanwhile, Marie grows tired of Woyzeck and turns her attentions to a handsome Drum Major, who in an ambiguous scene taking place in Marie’s bedroom, rapes her.

With his jealousy and suspicion, Woyzeck confronts the drum major, who beats him up and humiliates him. Finally, Woyzeck stabs Marie to death by a pond. While a third act trial is claimed by some to have been part of the original conception, the fragment as left by Büchner ends with Woyzeck disposing of the knife in the pond, and most renditions extrapolate this with him drowning while trying to clean himself of the blood after having dumped the knife in deep waters. 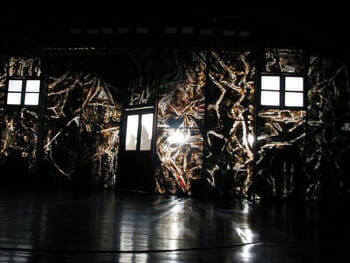 rafiki is a group of very talented young actors, and the roles were all assayed with a sure touch. From the brazenness of the Show Woman and Tavern Keeper (Itisha Peerbhoy) to the amorous Drum Major (Abhijeet Shetty) to the slowly disintegrating Franz Woyzeck (Anish Victor) and his friend, Andres Muller (Sachin Gurjale), the dark, sombre mood of the play was caught and held surely…the dialogue was telling, with hardly a wasted word; the script, according to the play brochure, was specially created for this production. From the very beginning, to the horrific end, the tortured mind of Woyzeck was brought out in a most telling fashion by Anish Victor, in an outstanding performance. The touches of comedy where the doctor advises a diet of peas, or where the horse silhouette (by Suresh) is at the tavern window, were handled well so that the comedy did not detract from the impact of the play. Anmol’s direction was also subtle, and did not obtrude at any time.

Particular mention needs to be made of the set; a windowed wall that was a beautifully made creation of paper, which had illuminated parts and silhouettes which added to the action and mood of the play. Indeed, the first time the set was backlit, there was a palpable gasp of admiration from the audience. A very effective set design (Bansi Kaul) indeed, where hardly a few more props were needed, and which provided exit points, off-the-stage action, and an upper floor positioning for some of the actors, all in one.

The cast taking a bow after the play (Pic: Deepa Mohan)

Lighting by Pritham Kumarwas, sound by Venkat Amudhan and music by Jason Zachariah were all very effective too. Anmol’s version gave less importance to the character of Marie and her various facets, than to the fragmented character of Woyzecks, as his world and his mind breaks down. Costumes, too (Ruchi Kochar) was quite contemporary as far as the women went, and acknowledged the Prussian touch only in the dress of the Drum Major.

The 90 minute play was supported by Max Mueller Bhavan, and produced by Toto Funds the Arts and rafiki. A serious, intense play performed ably and tellingly. Whenever there is a performance by rafiki, my unqualified recommendation is to go and see it!

Around a decade back, Alahalli lake was filled with sewage and garbage. Birds and fish did not thrive here anymore. Here’s the story of how citizens got this lake restored, with eight years of persistent efforts

Yet another rape in an upscale school. Some more protests. Do the statements made by the CM and the Home Minister point to the root problem? Read on.