BWSSB is all set for a 90 MLD (Million litres per day) Sewage Treatment Plant (STP) at Amanikane in Thubarahalli near Marathahalli. BWSSB officials claim this project is to stop channelising sewage water to Bellandur Lake and this in turn will preserve the lake. 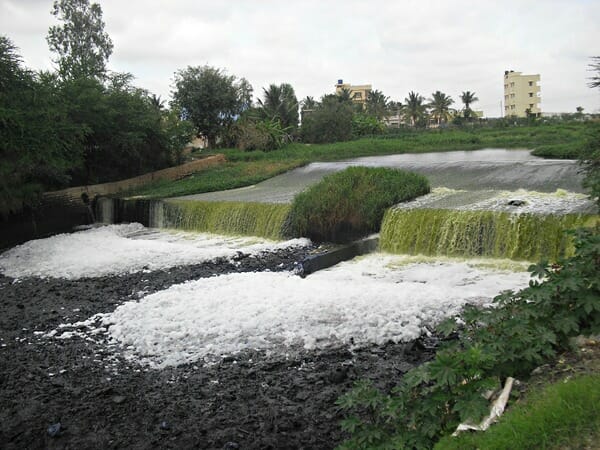 However, a Citizen Matters investigation has revealed that the proposed STP is not going to save Bellandur lake.

“The best solution to save Bellandur is to maintain the existing STPs in Koramangala and Challaghatta Valley and to get excess sewage to other STPs without polluting the lake”, says Nagesh, an STP expert.

Suresh Heblikar, an environmental activist feels that, “Our administrators should be environmentally conscious otherwise they would not bother about our lakes, water or air. This is the key reason behind all environmental catastrophes in Bangalore.”

Three STPs are not working

Citizen Matters has received complaints from activists that the three STP are not functioning and are letting untreated sewage water into Bellandur Lake. Sannappa Reddy, Additional Chief Engineer, Waste Water Management, BWSSB, declined to comment on these complaints. However, M Suresh Babu, Technical Assistant, Karnataka Municipal Reforms Programme (KMRP) acknowledged that the three STPs in KNC valley are not working. Asked why the three STPs have not been repaired but a new one was being built, he said it was not a matter to be discussed. “We will repair the three STPs very shortly. Why are you unnecessarily poking your nose in these matters when a lot of other issues happening around us. (sic)”

From the pumping station, the sewage water is being pumped to three sewage treatment plants (STP) in the KNC Valley. But due to non-working condition of the three STPs in KNC Valley, the untreated water is directly flowing to the Bellandur Lake.

But Chief Engineer Narayan, Wastewater Management department, BWSSB, is optimistic about the project. “We are doing this project with an intention to save Bellandur Lake. The Rs 250 crore project, if implemented, can solve the water shortage of industries as the treated water could be used for non-potable purposes,”he says

“The plant will also have a chemical ion extractor, which can extract phosphorus, fluoride, calcium etc from water. We have invited tender for the project,” he added.

The project faced trouble first from Lake Development Authority (LDA). They did not want to provide the  two acre land near Agara Lake for the plant. “For providing two acre land, we need to encroach lake (banks) which is not possible,” says Ravi Ralph, CEO of LDA. So BWSSB decided to shift the project to Amanikane at Thubarahalli near Marathahalli.

“Our plan was to install a two MLD plant near Agara Lake in two acres. Now wehave  56 acre land from KIADB so we have changed it to 90 MLD plant,” said Rudramurthy, Additional Chief engineer, Waste Water Management, BWSSB (now transferred).

The second hurdle was in the form of encroachment. When BWSSB survey team visited Amanikane, where the STP to be constructed, found that the land was encroached by private parties. Even before evicting the encroachers, BWSSB invited tenders for this Rs 250 crore project. However Manjunath K R, Executive Engineer, BWSSB, claimed, “we have evicted the people in July. Now there are no issues for starting the project.”

People have constructed houses by encroaching government land at Amanikane, where the STP plant is to be constructed. Pic: Sankar C G

But the land is still encroached. There are around 1000 houses constructed in the 56 acre land. Most people living there are street vendors. “We have been living here for the past four years by paying rent to Lokesh Reddy. If BWSSB evicts us, we will go to some other place,” says Krishnappa a resident.

Lokesh Reddy is said to be a businessman who has encroached the land, constructed houses and leased them, says the residents. But none of them knew more about Lokesh Reddy and his whereabouts.

“I filed a contempt petition in the year 2001 against BWSSB and the court transferred the case to Lok Adalat in 2002. Lok Adalat asked BWSSB to file a report on Bellandur Lake every month,” said Reddy.

‘They are giving the report of all pipe laying works and other BWSSB works in the name of Bellandur Lake works,” he added.

But on the other hand, V C Kumar, Executive Engineer, BWSSB, acknowledged that waste water is being dumped into Bellandur Lake. He also feels, it is BDA who is supposed to give the report on the action plan to save Bellandur Lake as they had taken up the lake for conservation in 2011.⊕

S Suresh Kumar, Minister for Urban Development, met  BWSSB Chairman Gaurav Gupta on 3rd September 2012 to seek clarification on inefficient STPs at Bellandur lake.  The Minister was there after reading an article on Citizen Matters published on 29th August 2012.

Speaking to Citizen Matters after the meeting, Gupta assured there will be action. “I will speak with the concerned engineers and will take necessary action shortly,” he said.

Bannerghata zoo has work to do

If your visit to Bannerghatta Biological Park turns out worthwhile, it’s because of its decent, tourist-friendly infrastructure. However, when it comes to wildlife care, the Park is yet to plug certain loopholes.

Who is counting your parks and public open spaces? No one. A Citizen Matters expose on a blatant violation for over 25 years by Bengaluru’s administrators.