About two years ago, we came up with a simple idea of collecting old newspapers from the apartments in this community, and sell them to the local kabadiwala. The money thus collected would be donated to local orphanages and old-age homes. Many residents, some as young as three, formed an army of enthusiastic volunteers that went around door to door collecting old newspapers. 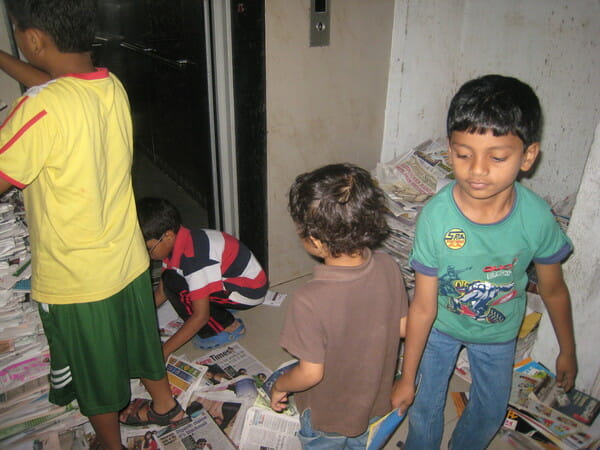 With this initiative we have raised Rs 1,02,000 in the last two years and we have been able to help 13 local charity institutions, which includes schools, orphanages and old-age homes.

Once the charity organisation has been identified for donation, we went a step further to visit them, meet the students or the senior citizens, and find out what their current requirement is.

Principal of Twinklers Public School, an orphanage school, in JP Nagar told them, “Most often people think a school needs textbooks and notebooks. But our trust already provides those for the children. What we need is help with infrastructure.”

The money from that round of newspaper collection was then used to buy them a 2000 litre water tank.

This quarterly activity has seen tremendous support from the residents, especially the children, who happily spend their Sunday morning ringing doorbells and carrying bundles of newspaper. Tabassum, a six year old volunteer was heard to remark that this was one activity she really looked forward to.

We hope more and more communities will take inspiration from this story and start similar initiatives to contribute to welfare of their neighbourhood.

This whole initiative was inspired by, Divyadeepa Trust, Mysore.⊕

About Shree Rekha 1 Article
The author has not yet added any personal or biographical info to her or his author profile.

Bellandur lake always hits headlines for some reason – this time it’s in news because the National Green Tribunal has taken it on itself to save the lake from sewage abuse.

Janaspandana gets together people, officials

Recently Janaspandana programmes were held in JP NAGAR and BTM layout. But what is Janaspandana and how can it help solve civic issues?