On August 24th 2012, the Karnataka High Court, in a major verdict, has instructed Maverick Holdings, a construction company, to build 1512 flats in 24 months for the original allottees at the economically weaker section (EWS) colony in Ejjipura. 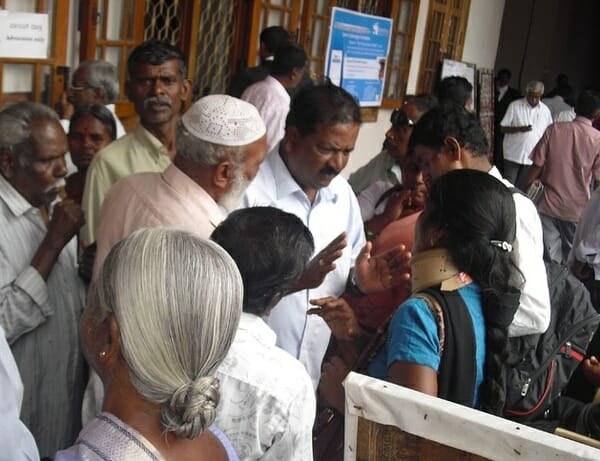 A group of allottees from the original 1512 beneficiaries waiting outside the High Court for the verdict. Pic: Sankar C G.

“The court’s priority is to get the flats for the original allottees without any fight. It should not go to the hands of any unauthorised people,” said Vikramajit Sen Chief Justice of High Court.

Aniyan Joseph, the advocate pleading for the original allottees is very happy with the High Court verdict. “All the 1512 original allottees will get a 312 square feet house. There will be a park, parking area, driveways, anganwadi, public health center, community center and a compound wall”, he told Citizen Matters.

All amenities and flats will be constructed in 7.25 acres land out of the total 15 acre. Of the 1512 original allottees, some of them were in the court. “We are so happy with the court verdict”, they told Citizen Matters. “It is Aniyan Joseph’s greatness that gave us this luxury,” said Meena S, an original allottee, full of praise of the advocate who fought it out for them.

As noted earlier, BBMP and Maverick have entered into an agreement with original allottees over the construction and rehabilitation. Citizen Matters has a copy of this agreement.

Major points in the agreement

Panel to identify the original allottees

The High Court has asked BBMP to form a panel to identify the original allottees and to monitor the construction works.

“BBMP has to take initiative for the formation of the panel consisting of BBMP commissioner, Chief Engineer, and an engineer nominated by CPWD (Central Public Works Department). The panel will decide who are the real allottees and monitor the reconstruction till the end,” said Joseph.

Relocation and rehabilitation of original allottees was the other issue that delayed the court’s verdict. The land where the flats are to be constructed needs to be vacated for the work to start. BBMP’s suggestion of relocation to Iggalur, near Hosur Road, was not acceptable to the original allottees.

To force a settlement, the court finally asked BBMP, Maverick and the original allottees to have an out-of-court meeting to sort out matters. “In the meeting we took a decision to give Rs 30,000 for 300 original allottees for relocating to some other place. The rest of them have to be relocated to Iggalur or find alternative ways,” says Joseph.

The High Court has given 15 days time to Maverick to give Rs 30,000 for the relocation of original allottees. Court also gave six weeks time for Maverick to construct temporary houses at Iggalur for the rest of the 1512 allottees. As per the agreement, BBMP has to ensure accessibility of roads, medical facilities and transportation in the rehabilitation site.⊕

Hundreds of trees in Bengaluru are being felled for Metro rail, but compensatory saplings are often planted outside the city, or maybe never. Officials do not keep track of the saplings or ensure their survival either

One sitting Congress MLA, a BJP leader and council election hopeful, and a citizens group, all conducted campaigns in BTM Layout to collect relief materials and cash for flood-impacted people in North Karnataka.

Justice Subhash Adi says there are plans to curb the release of untreated sewage water into lakes.