A determined Rajvir P Sharma is not ready to quit the battle. Last week, two days, after Karnataka’s Department of Personnel and Administrative Reforms (DPAR) shot out his transfer order, he was able to get a stay from the Central Administrative Tribunal (CAT). CAT stayed the transfer order for 14 days in view of the application given by Rajvir Sharma against the stay order.

"The petitioner Rajvir Sharma and M Nagarajan, standing counsel of state government, respondents from government side will have to be in the CAT court for the hearing on August 30th 2012. I have no more comment," Nagaraj K, Deputy Registrar, CAT told Citizen Matters. 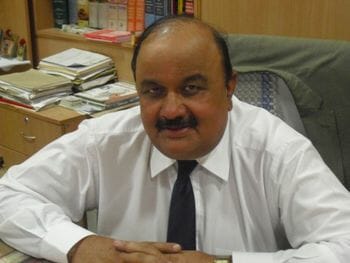 An undaunted Dr Rajvir Sharma (IPS), a medical and law graduate, did not hesitate before challenging the state government at the Central Administrative Tribunal. Pic: Sankar C G.

Sharma assumed charge in BMTF as Additional Director General of Police on January 1st 2012. During his service he took 195 cases and chargesheeted 20 BBMP engineers. BBMP officials protested this and demanding that the state government clip the powers of BMTF and withdraw cases against BBMP engineers.

"I did my duty; as long as I hold charge in my office I will do that. A number of cases are on inspection, once it is done I will chargesheet more (officials)," says Sharma. When asked about the likely outcome of his tenancy in BMTF, he declined to comment.

Sharma challenged the transfer on the grounds of directions given by Supreme Court in its now famous police reforms verdict of 2006. In 1996, Prakash Singh, a retired police officer, petitioned in the Supreme Court for directing the government of India to frame a new Police Act. At the end of a decade long court proceeding, the Supreme Court on September 22nd 2006 delivered a landmark verdict giving directions on transfer, postings, promotions, handling complaints, etc., on police officials.

As per the stay order issued by the CAT, a copy of which has been reviewed by Citizen Matters, the Karnataka state government has violated 2006-Supreme Court order by transferring Sharma. The apex court had made two-year service mandatory for all the police officials. Going by the order, Rajvir Sharma was to continue as ADGP at BMTF till December 31st 2013.

(a) Directed each State Government to establish a State Security Commission and a Police Establishment Board (to determine transfers, postings, promotions, etc)
(b) Outline the procedure for selection of the Director General of Police
(c) Prescribed minimum two year tenure for police officers
(d) Directed police departments to have a separate law and order functions from the investigation function
(e) Ordered the creation of a district and State level Police Complaints Authority to deal with complaints against police department
(f) Directed the Central Government to constitute a National Security Commission whose main task shall be to review the existing measures in order to enhance their effectiveness and also focus on ameliorating the conditions of the police service

Contrary to this, the state government submitted documents about an ordinance claiming that the 2006 Supreme Court verdict is not applicable to the ADGP level of police officers.

The CAT’s stay order also pointed out that the DPAR issued Sharma’s transfer order without the prior concurrence from of Urban Development Department (UDD), under whom BMTF functions. "The order was from the higher authority so I am not in a position to comment anything related to the transfer order", Amita Prasad, principal secretary of UDD, told Citizen Matters.

The BMTF was formed in 1996 under the UDD to detect and investigate offences related to illegal encroachment of government property within Bengaluru Metropolitan Area. It is supposed to work as a watchdog for protection of government land. It has a police wing (prosecution), town planning wing (for inspections) and an administration wing. ⊕

Workers in major industrial clusters in Bengaluru participated in the nationwide strike today, which affected factories and PSUs. What prompted them to protest?