Private Water tankers in Bangalore are exploiting the situation that desperately demands their service and there is no authority to monitor them.

Majority of the new apartments rely on water tankers and residents are often afraid of questioning the quality, for fear of retribution. “We are at the mercy of water tank people, if they stop providing water, we will be in trouble. By knowing that they keep on increasing the price of water and do not produce water quality test results,” says Saurabh Bansal, Committee member, in charge of water at Springfield apartment, Sarjapur Road. 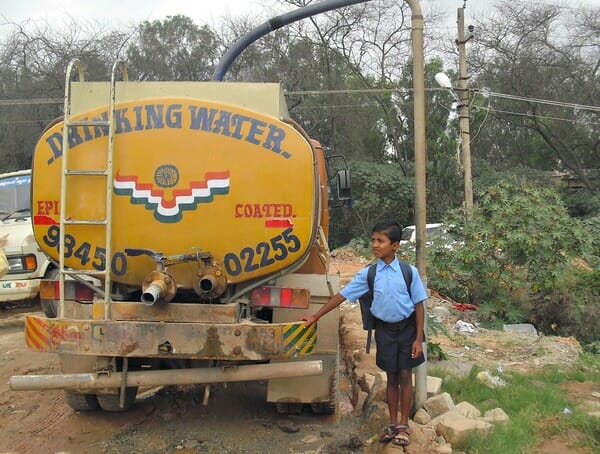 The residents pay around Rs 400 for one load of water (6000 litres). But any questions and the tanker suppliers threaten to stop the service.

No authority in Bangalore to monitor private water tankers

The Ground Water Authority was formed in the year 2011, under Karnataka Groundwater (Regulation and Control of Development and Management) Act, 2011. The Authority, held a meeting at Khanija Bhavan in the beginning of this year to form mandatory guidelines for private water suppliers including price fixation, mandatory lab test to ensure quality, trade licence, revealing source of water and specification of quantity of water.

There was also a decision to identify engineers to monitor private water suppliers.

There is no clarity on the source of water

Water tankers are relying on borewells located everywhere from nearby lakes, paddy fields, private residences and even burial grounds. For instance, some tankers source water from borewells nearby Bellandur lake and burial ground on Panathur Road, which connects Outer Ring Road to Varthur. Shashirekha M V, water researcher and former official of Department of Mines and Geology, feels that bore wells near burial ground can carry polluted water. “Whatever the chemical you put along with the dead body, percolate into the groundwater. Automatically it reaches the nearby borewells,” says Shashirekha.

Water tanker suppliers rarely produce any lab test results that confirm the potability of the water.  Of the few who do, the details are vague. Citizen Matters has a copy of the lab test done by Bangalore Analytical Research Center for Sangameshwara Water Suppliers. The report however does not have the details of source of the water that was tested.

An apartment complex association President, who does not want to be named, feels that though they buy water from water tankers there is no clarity of the source from where they get the water. “We asked water suppliers to show the trade license, lab test results and source of water but was of no use. But finally on repeated demand they have given us a lab test result. As they are on demand we did not ask more to avoid confrontation with them,” he added.

When contacted, the president of an un-registered tanker owners association refused to share information about their water sources or pricing.

S Vishwanath, a Bangalore based Rainwater Harvesting (RWH) consultant feels that water tankers are doing a good job but he adds that there are flaws in the system.

He thinks that water shortage is the main cause of this mess and makes some suggestions. “For that we need to do three things, preserve our lakes, make it mandatory to have RWH in all apartments, houses, parks, playgrounds etc,. and use treated sewage water to recharge ground water,” says Vishwanath.

“Around 1000 water tankers are there in Bangalore, if they stop supplying water, our city will be at a standstill. BDA should not allow constructions if there is no water sources. BWSSB should fix the price of the water (for all consumers) at Rs 36 per 1000 litre, then people will not waste water,” he said.⊕

Candidate debates are a great way to assess candidates on their merits when compared to others. Mahadevapura in Bengaluru saw such a debate recently.

More money to sweep, less for garbage collection in Bellandur

Bellandur, with its 100+ garbage dumps, had gained a special place in our garbage map. Now BBMP reduces door-to-door collection autos and increases street sweepers for the ward. Will it really help?

A walker’s guide to the churches in the Cantonment

Wondering what you can do this Christmas? A walk through some of Bengaluru’s oldest churches may just be the thing to get you in the right spirit.