Even as police confirmed making the first arrests in Bengaluru for rumour-mongering, city businesses depending on staff from the Northeast have been affected since the panic-driven exodus began on Wednesday.  V S D’Souza, DCP (Intelligence) confirmed around midnight August 17th that two people were arrested earlier in the evening for threatening rumors. D’Souza however declined comment on whether the arrested were from any sectarian organisation or community.

Meanwhile, restaurants, retail chains and spas have been hit according to some business owners in the city. Philip Deepak, owner of Popsies restaurant in Koramangala who employed 12 Northeast service staff says that half of them have already left that it has impacted the customer retention. He hopes for a better situation. "We have taken precautions like relieving the remaining people on time so that they reach home safe", he said. 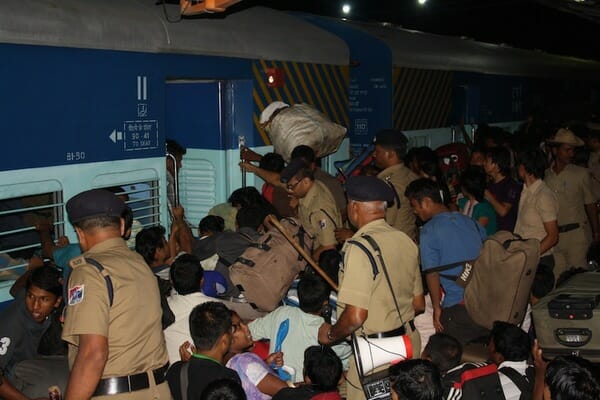 There was fears of a stampede on August 16th night at the city railway station where the Bangalore-Guwahati train was set to depart. Police are all over the surge of people trying to get into the coach. Pic: Abhishek Angad.

The Tibetan Mall in Koramangala, run by FTA (Federation of Tibetan Co-operatives Associations) is one of the specialty malls in Bangalore that employed people from Tibet as well as some the Northeast. A few shops in that building owned by Tibetans have been shut down. Also, the Tibetan restaurant is shut down from the past two days. Tashi Wangdu, CEO, FTA said, "The restaurant has 19 workers and the majority of them have left."

Wangdu added that he along with different groups representing Northeast people met the Chief Minister of Karnataka, Jagdish Shettar on the situation.

Carolyn Nenvitoutsang, who works as a receptionist in a massage and spa parlor said that some housekeeping staff have left along with two therapists. “Business have gone down by 30 percent as we are not able to take more appointments from customers”, she said.

Carolyn acknowledged that she is receiving SMS from her friends to leave the city citing violence against Northeast citizens. "We are also planning to leave may this week", she added.

A week of exodus

Thousands of Northeast citizens have been rushing to Bangalore’s central railway station for the past two days. Many are students. Bangalore’s colleges and universities are big draw for youngsters from the Northeast, who come here to get degrees and jobs.

On Thursday August 16th night, Citizen Matters spoke to the Karnataka Law Minister Suresh Kumar who was present at the railway station. He said that after the problems in Mumbai and Pune, parents were calling their children back to NE. "We are constantly appealing to them that they are safer here than on trains or in their home town. But they want to be with their parents at this juncture”, said Kumar. 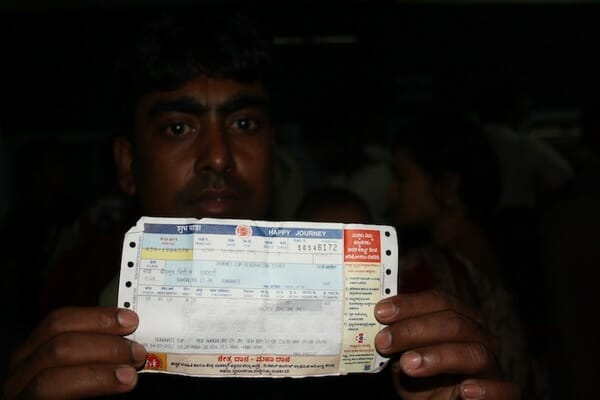 A returning Northeast resident with his ticket. Pic: Abhishek Angad.

Bangalore City Police sent several messages countering rumours through the cell networks. “Important message from the commissioner of police: No incidents are reported to attack on North Eastern State Citizens in Bangalore do not panic or heed to rumors”, one such message said on Thursday.

There are no accurate accounts available for how many have left, but the numbers run into excess of 5000. Some reports are quoting the South Western Railways as saying that 11000 citizens have left.

At least one origin for the panic appears to point to a sectarian group. An organisation calling itself the Bhagat Singh Kranti Sena had claimed on its Facebook page that a fatwa was issued from Muslims to Northeast citizens asking the latter to leave Bangalore by 20th August or face riots. That post was subsequently removed.

Manohar Elavarthi is one of people who saw the post. Elavarthi is a recognised social activist and runs Sangama, a Bangalore-based organisation that supports the rights of sexual minorities.  "I called them (the Sena) to ask which Muslim organisation has issued Fatwa. They did not give a concrete answer", he says.

Widely circulated SMS messages with rumours with threats of dire consequences including killings, if Northeast citizens stay in Bengaluru beyond 20th August, instilled fear in thousands.  “Just now I heard that one north east guy was killed near the Koramangala passport office because of Assam issue-please be careful" was one such message that caused panic.

Kanindra Barman, who hails from Assam and owns the 5th Element Spa agreed that business is impacted.

At the same time he says that there is no need for panic as Bangalore is one of the safest places for Northeast citizens in India. He alleges that miscreants are taking advantage of the situation and instilling fears among Northeast citizens.

"The panic is mostly in non-educated or say low income Northeast people who rely heavily for information on SMSes and word of mouth. I have lots of corporate friends and they are not at all troubled”, says Barman.

He also urged from the cops to give some visual support to bring them into confidence.

It is believed among Northeast citizens that following the clashes in Assam, the repercussions are that Muslims are beating or trying to create problems in other Indian cities for them. The events are Mumbai, Pune and Mysore had lead to these assumptions.

Bangaloreans were at the station trying to calm people down with placards and signs. This supportive sign says ‘Bangaloreans are with the Northeast citizens, there is no need to panic’. Pic: Abhishek Angad.

D S Rajashekhar, Secretary, Federation of Northeast residents associations, Banaswadi asked for Bangalorean to take responsibility to calm down the situation.  Rajashekhar is himself not a Northeast-origin person, but is an office-bearer with the association.

“Muslims are not involved in beating up people. A lot of people from the Muslim community have come forward and assured their protection”, he told Citizen Matters.

A brief chronology of recent events compiled from media and other reports.

July 2012: Ethnic violence in Assam between Bodos and Muslims.

August 8th-11th: Northeast citizens targeted in Pune and video clips violence in Assam against Muslims circulate in the city.

Residents and experts to draw up Whitefield heritage management plan

A dialogue and consultation held to discuss the loss of heritage in Whitefield due to indiscriminate road-widening had residents of the area speaking fervently about the need to safeguard their unique legacy.

The long road to clean air: Behind the court ruling on GIL’s Whitefield plant

The Supreme Court has imposed a penalty of Rs 50 lakh on Graphite India limited (GIL), calling its Whitefield plant a serious offender contributing to air pollution in the area. In the first of an in-depth two-part series, we look at the long struggle that led to the ruling.