An engineer by profession, he joined Raman Research Institute as a lab assistant in 1984 while pursuing his higher studies, moving on to become a scientist at the same institute.
He later ventured out on his own, setting up the Indian branch of Vxtel, a technology firm, later acquired by Intel. He has worked at Intel as director of the connectivity division, focussing on research and innovation. He has got many accolades. 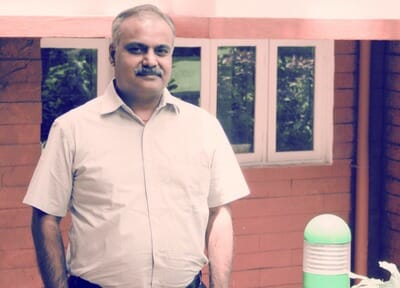 Finding healthcare, one of the most poorly managed fields, and realising that building hardware alone cannot bridge the healthcare gap, he started his own R&D firm, Apcogsys. This one-year-old startup develops technology to help the elderly become independent and enhance the quality of life.

How did you get the idea of starting a company dedicated to help elderly people?

My father was once admitted in the ICU which lacked (essential) equipments, before he could move to the general ward, he caught an infection and then succumbed. And during my research, I saw there is a huge gap in healthcare. In that, one area which was hugely neglected was geriatrics care. I realised that even with various (government) programmes for elderly, the network to implement doesn’t exist. There are lot of challenges in healthcare. I thought that Information Technology can bridge a lot of these gaps (along with other technology).

What do you think of the way the elderly are treated in our country?

Nearly eight percent of the population today is elderly in our country. People are too busy to look after them. We all owe certain things to our elders but when they become physically dependent on us, it becomes difficult for many to sacrifice a lucrative job (to look after them).

What is the reason for this?

It’s a competitive world. To sustain two non-working old people, the son/daughter works more. And when their health deteriorates, youngsters have to slog even more. This increases stress and hence loss of productivity. In this whole churn, the elderly become the last priority. Some people give up and some find alternate means to take care of elderly.

So, what does your company plan to do?

Firstly, we are coming from the point of view of the elderly. In their helpless state, they just want love and affection from people. Secondly, there are youngsters who really want to take care of them but somehow succumb to the pressure of the competitive world. So seeing both the things we asked – can we augment technology to reduce this gap.

We are an R&D firm focussing on building technology so that the elderly are self-dependent. We are focussing on assisted mobility like building wheelchairs, tables that can be moved with a remote joystick. Second, we are empowering them by building an elderly friendly portal which connects to websites and (helps perform) transactions in a much simpler way. Third, we are building home automation devices to track and monitor them remotely.

What is your strategy, as India is a price sensitive market?

We have looked at how we can make it affordable. We can reduce the cost to a certain extent. Take an example of wheelchair which is predominantly made in western countries. I see there are sufficient margins which can be brought down. We are re-designing and building everything from scratch.

With such an interesting proposition, why not become a vendor instead of technology provider?

I learned certain things from previous venture. I understood that by giving a neutral platform where different vendors participate, you propagate the idea better. A patient just cares about the services irrespective of hospitals. To make the technology ubiquitous, one should not be a service provider but a service enabler.

Do you think there is big market in India?

Market has been always there but it is latent. In spite of different usability scenario in India, people buy westernised products. We are building products dedicated to India. India is a huge market for us.

Do you think there are enough public spaces for elderly?

No, but there is scope for improvement. The elderly cannot even cross a road. They give up going to the pharmacy just for this reason. At the same time, there is enough scope for innovative business models to come in to help these.

What’s your message to young entrepreneurs?

Your end goal shouldn’t be just revenue. Of course you need it to sustain but revenue should not be a theme with which one should invest. It should only be a guaranteed byproduct.

What else you do apart from this?

I listen to music and write poems in my free time.⊕

160 kilometres from Bengaluru, Bluff or Shivanasamudra is an ideal getaway. Roaring water falls, lush greenery and serenity is what you sign up for.

When illegal maxicabs, vans serve the public, why not regularise them?

Here’s how an archaic transport policy ensures Bengalureans’ need for public transport is not adequately served, and bans out of the box solutions.

Life in a Darshini

Most of us walk quickly into the Bangalore eateries that are called “Darshini”, order our food, and take it with hardly a glance at the person who is serving it. But that person often has a keen sense of observation, and may know you very well!