Now one more week to see the fate of the reconstruction of EWS flats for the poor at Ejipura. After the hearing High Court Chief Justice Vikramajit Sen and Justice Aravind Kumar adjourned the session to Aug 21st, 2012. Aniyan Joseph feels that, on 21st High Court may release a final order over EWS flats. 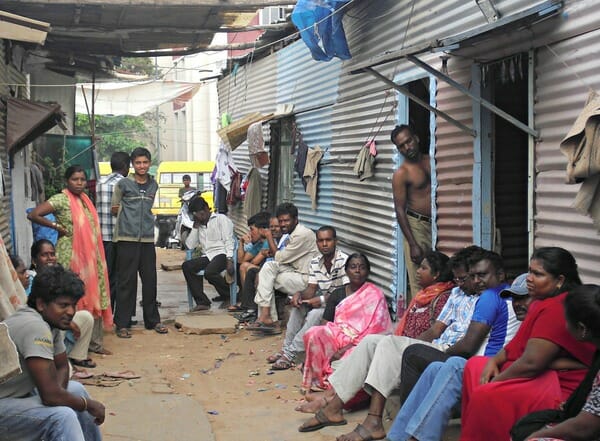 In a week the fate of the reconstruction of EWS flats for the poor at Ejipura will be known. Pic: Sankar C G

On August 8th, the High Court asked BBMP, Maverick Holdings and Aniyan Joseph, advocate for original 1512-beneficiaries in the Ejipura case, to meet on 9th evening at BBMP to resolve the allotment and rehabilitation crisis.

“In the meeting we have discussed about the relocation, identification, issues in the plan and so many other things. I think everything is in the right track now and we can wait for the final court order,” says Aniyan.

The allottees had moved to high court in 2011 when they faced with the prospect that unauthorised people currently staying in the EWS colony were likely to get the new BBMP flats. This was due to the ID-cards issued by BBMP to them between 2007-11. At the hearing on on July 18th, the High Court asked the BBMP Commissioner to file an affidavit with the detailed action plan of the reconstruction. BBMP complied.

Folowing this, at the court on August 2nd, advocate Aniyan Joseph, after scrutinising BBMP’s affidavit, said he was certain that if BBMP and Maverick were to go on with the construction, without making clarity on who are the original allottees, the flats may reach to some other unauthorised people.

The petitioners have also demanded proper rehabilitation till the construction of flats gets over. Maverick’s suggestion of rehabilitation in Hosur Road, at Iggalur, 23 kms from Ejipura was not acceptable to the original allottees. “We are daily wage workers. Coming to the city everyday for work will be a hectic task if we be relocated to Hosur Road,” says Meena Venkatappa, one of the original allottees, currently residing at AT Halli, near Richmond circle.

On the other hand, Uday Garudachar, head of Maverick Holdings, said, “We know their pathetic living conditions. These kinds of demands are unacceptable and we are here not to provide everything they seek.”

Over the past eight years, reconstruction of EWS flats has not seen the light of day. The issue has come up to the court eight times, on various grounds: issues over the agreement, tender disputes and the conflict between original allottees and unauthorised people. “This time we do not want the same to happen again. We need full clarity on every issue over the reconstruction,” says Thiruvenkatam.

All eyes are on the High Court of Karnataka, since it appears to be the only body that can force a resolution. The next hearing is on August 13th, and before that is the meeting between BBMP, Maverick and petitioners’ advocate Aniyan Joseph.⊕

200 families in an informal settlement in Brookefield have been permanently forced out of their homes due to flooding and await compensation.

BBMP’s roadwidening plans on Sankey Road took a hit with citizens resolutely blocking its tree cutting auction. Amidst tension and drama, municipal officials backed down for the day.

Bengaluru Buzz: BBMP’s new plan to restore dug roads | Traffic fines may be reduced | Ultimatum to restaurants on plastic use

BBMP will mandate agencies that dig up roads, to pay a security deposit that covers 100 percent of the road restoration cost. Also from now, BBMP – not the agencies – will restore the dug roads. Read more on this, and other news from the city over the past week, in our roundup