The first hearing of the government’s committee – headed by Kaushik Mukherjee, who is UDD (Urban Development Department) Additional Chief Secretary and Development Commissioner – was on August 13th. 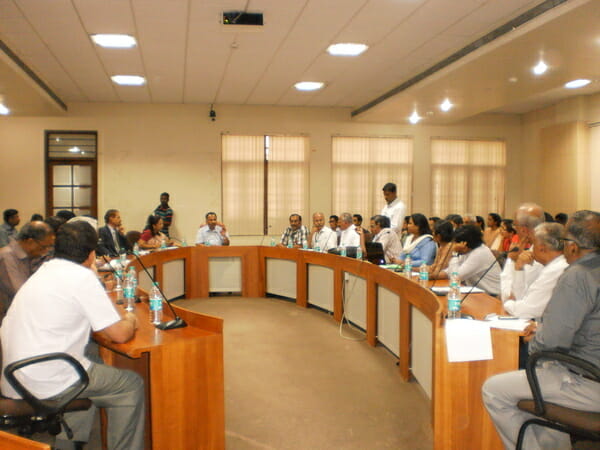 Other members of this committee are UDD Principal Secretary Dr Amita Prasad, ACP (Traffic) M A Saleem, and T G Sitharam, Chiarman of IISc’s CISTUP (Centre for Infrastructure, Sustainable Transport and Urban Planning). CISTUP had earlier submitted a report to BDA recommending changes in the project, clearly saying that signal-free corridors were ineffective in the long-term.

It was on the August 13th hearing that the decision was made to form a sub-committee of citizens and government officials. The committee has to submit line drawings of their alternate plans for the Sirsi-Agara corridor on August 25th, based on which government’s committee will make its decision.

The sub-committee’s citizen members include one of the PIL petitioners Nitin Seshadri and Vijayan Menon of CAF (Citizens Action Forum), along with representatives of the green NGO Hasiru Usiru, St John’s Medical Hospital (located along the project alignment), Koramangala 6th block RWA and others. UDD is yet to give the final list of selected citizen members. Government representatives are top level engineers of BBMP and BDA, Assistant Commissioner, Traffic (Adugodi), and Sitharam.

Except Koramangala 6th block RWA, all others have been opposing the project. Speaking to Citizen Matters, President of 6th block RWA, Jayaramu says, "Commuter rail and bus lanes may be long term solutions, but there is no political will to implement these. There will be relief for at least 8-10 years when the project is implemented, which is better than having nothing."

Around 50 citizens – including activists and residents of Koramangala and surrounding areas – attended the hearing on 13th. The petitioners had come armed with a detailed presentation that highlighted problems in the project approval process, and also showed alternative roads to where the project could be shifted.

Kaushik Mukherjee, Chairman of the meeting, did not entirely hear out alternative proposals, but said that he was open to those. He said that, instead of Sarjapur road, Hosur road could be widened for the corridor. 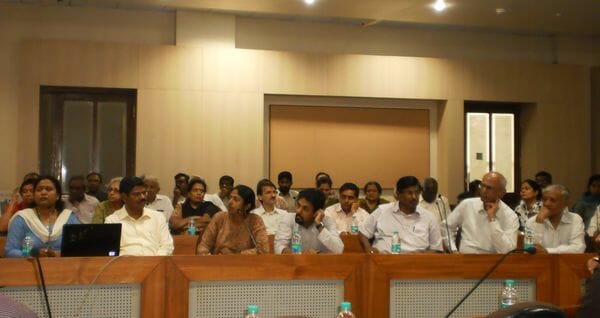 "Much traffic comes from Hosur Road side, so Hosur Road can be widened between Silk Board and Madivala checkpost. Acquire the land near Hanuman Temple on Hosur Road. Tree-cutting can be avoided as well," he said. This suggestion was greeted by applause from residents.

Dr Mohan from St John’s Hospital said that the project would make it difficult for patients and students to cross the road to reach the hospital. "Some 10,000 people come to the hospital daily. Ambulances come from both ends of the road. Safety of all should be assured," he said. Similar concern was voiced by the management of Sevasadan and St Francis School – that school students coming from Madivala side would not be able to cross the road; they said that the proposal to widen Hosur road should be considered.

Kathyayini Chamaraj of the NGO CIVIC said that the government-appointed committee had the power to re-consider the idea of signal-free corridor itself, instead of finding alternate locations for the corridor. Mukherjee said that this could be discussed. He said proceedings of the committee would be uploaded in the BDA website, and also that all trees that are cut would be accounted for.

Speaking to Citizen Matters, Vijayan Menon said that the outcome of the meeting was good. "We were heard and asked to come up with alternatives, unlike previous meetings on the issue. This has expanded the scope for citizens to participate in projects in the city. Our concept is that signal-free corridor benefits only car owners as opposed to pedestrians and cyclists. In a residential area with hospitals and schools, traffic should be calmed instead of aggravated further," he said.

Domestic workers who aren’t welcome to work anymore, cab drivers and street vendors who can’t go out – informal workers in the city are a frustrated lot as they have no work or wages anymore. Many are unable to meet basic expenses for food and rent.

Phase 2 of Namma Metro, which will cover large parts of Bengaluru, has been progressing. While work is in the final stages in some lines, it is lagging in some others.

Is the fare fair?

Auto fares have been hiked. The commuters are not happy. But neither are the auto drivers. Hike is not the only bone of contention here.