Dreamscope Theatres’ play ‘The Forest’  was presented at JSS Auditorium in Jayanagar on August 5th. The play was written and directed by Puja Goel; she also is the founder of the group. She wrote the play 15 years ago.

The Forest presents a play for children but sends a message to adults making them aware about the depleting forest. This play engages a child’s psychology and her decision to save the forest. 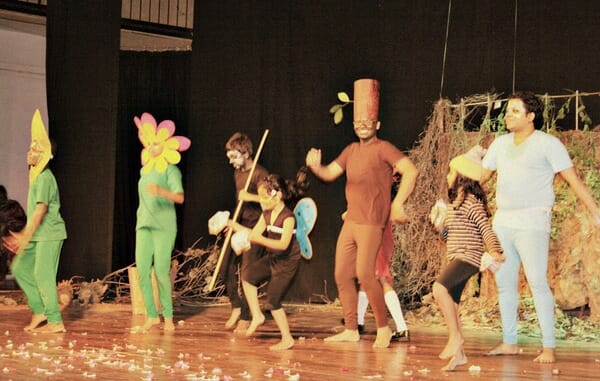 At the centre, the play is from the last remains of the earth-forest. The foresters, the flowers, trees, animals and butterflies, believe that humans are extinct. At that time, a girl named Mandy loses her way and ends up in the forest. Mandy realises that she can understand the foresters language and the foresters assume that she is one of them. But they realise that she is a little human and worry that like grownups, she will also destroy the forest.

Meanwhile, the foresters are getting ready for the party organised by the fairy queen. But soon the fairy queen cancels the party because of Mandy. The girl however convinces her that she will cause no harm and that wants to be friends. The Queen then, agrees to host the party. In the middle of all this, Mandy finds a wolf, who claims that he is a human who has been cursed to turn into a wolf. And the wolf, convinces her to find that magical seed that’ll turn him into a human again.

Much to Mandy’s shock, she finds that the curse was placed by none other than the fairy queen for being cruel to the foresters. Now the little girl is torn between her loyalty to her own species and her new friends, the foresters.

She of course chooses the foresters.

Director Puja  points that humans have been cutting down forests in the name of development. “What  are we going to leave for our future generation?”, she asks.

She has been into theatre for the last 10 years and says she has worked with children before, but this is her first time, directing them. She says, “It was little difficult but lot of fun, it was two-and-half-months of crazy rehearsal. I wanted to draw children in the world of fantasy and the adults get a meaning out of it.”

The play comprised mostly kids i.e. eight of them and rest were artists from Dreamscope Theatre.

Raghvendra Rao, a parent of one the kids participating in the play says that the play sends us a strong message at the same time entertaining the kids.”

The set was aptly designed to portray the surroundings within a forest.⊕

Elevated east-west and north-south corridor and property tax board are among the prominent promises of Congress party.

R Ashok, BJP, won the 2008 Assembly elections from Padmanabhanagar by a large margin. He is the Deputy CM, holds the Home and Transport portfolios and is the In – Charge Minister for Bangalore city. Learn more about this veteran politician, his assets, work record, performance and utilisation of funds

For poor performance and lack of initiative, several city officials were pulled up by the Lok Adalat or the ‘People’s Court’. Unfortunately, most remained unswayed by the end of the session.