Sadly, it’s only when some people leave the scene that one is moved to write about the immense worth of their lives and work. Though I had met Dr Joseph George (1st October 1921 – 9th July 2012), it was only when he passed away, that I realised that I could have documented this doyen of ornithology in Bangalore, much earlier.

Dr Joseph George got the first rank in his bachelor’s degree, studying at St Joseph’s College, Trichy, and went on to continue his studies at Agra University, with a scholarship. He later completed his doctoral degree. 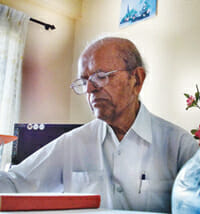 He worked for a long time at the Forest Research Institute (where he went on to become the Assistant Director). He and Gurcharan Singh, a school headmaster by profession, were the people who literally ‘ran’ the birdwatching effort in Dehradun.

Later, Dr George became the Assistant Director of the Buildings Research Institute, Roorkee. He then moved to Bangalore, as the Director of the Indian Plywood Industries’ Research (and now, Training) Institute at Peenya.

He was the person who started group birdwatching in Bangalore in 1972, a little after he came here. He did this, along with T N A Perumal, the wildlife photographer, and Upendra, of the Automobile Association of India.

Throughout his time in Bangalore, ornithology remained Dr George’s passion. From the day the Newsletter for Birdwatchers started being printed, he painstakingly proofread every issue.

As I had pointed out in my article on the rise of birding in Bangalore, one of the important milestones for the Birdwatchers’ Field Club was the compilation of the official annotated checklist of the birds of Bangalore, with sponsorship from Bikram Grewal, a noted naturalist. The very first bird list was made by Dr Joseph George, and released by Dr Salim Ali in November 1977 on his birthday, at a function at the Raman Research Institute.

He took great pains to keep Birdwatchers’ Field Club of Bangalore alive by sending handwritten postcards to everyone who gave him their address. I still recollect his handwriting with large letters!

Dr M B Krishna, another noted Bangalore ornithologist, reminisces about the days when they prepared the first annotated checklist of the birds of Bangalore, together. "In the bargain, if I recollect right, I got three weeks of free lunch and good work every day, full time!"

"He took great pains to keep Birdwatchers’ Field Club of Bangalore alive by sending handwritten postcards to everyone who gave him their address. I still recollect his handwriting with large letters!" says Shanta Manohar, a Bangalore-based birdwatcher.

On the scientific side of birdwatching, Dr Krishna adds: "He was meticulous in his observations, and his work on bamboo nest boxes is a classic, merging his professional interest in wood science with his hobby, interest in birds. The use of dyed feathers dispersed from a hillside so that swifts could pick it up to build nests, and the subsequent detection of those dyed feathers in the nests at the Forest Research Institute, was innovative. "

Dr Krishna adds that many techniques used by Dr George were firsts in the world, such as his counting migrating Grey Drongos to arrive at their migration timings, or some of his mapping techniques.

Zafar Futehally, 93, the other venerable ornithologist of Bangalore, remembers how the ‘Newsletter for Birdwatchers’ started: "Sometime in 1988, before we shifted to Kodaikanal, George telephoned to say that he wanted to discuss something and could we meet him and another friend… I invited him to the Bangalore Club and it was then, we decided that Sridhar would print and publish the newsletter. Going into print was a great advance."

A person with a mission, and with a passion – we salute Dr Joseph George, and revere his memory. When each of us looks up into the tree and thrills at the sight of a feathered friend, let us remember that we owe a lot to Dr George.⊕

Hi-tech cleaning for your mattress

Earlier beds were cleaned by putting them out in the sun to kill the germs and beating them with a stick to remove dust. But today there are options of shampooing and hi-tech vacuum cleaning available for the same.

How to improve traffic on Mysore Road

Simple steps that can bring in dramatic changes are often ignored. Here are some such steps suggested by a commuter.