When Dr S C Sharma, 45, resident of Jayanagar 4th Block filed a complaint with the Bengaluru Metropolitan Task Force against a BBMP engineer who was allowing an illegal building to stand, he did not know that by sheer coincidence, engineers were going to revolt against BMTF police head Rajvir Sharma, an office of the rank of Assistant Director General of Police (ADGP).

The particular illegal building was constructed in 1992.  The RTI record, which Citizen Matters has received from Sharma shows that BBMP (then BMP) has sanctioned a two storey building in 1992. But the owner has constructed a five storey building by violating the norms.  “I have given compliant to KSPCB, BBMP and Lokayukta in 2011 but was of no use. We are losing privacy due to this illegal commercial building in the residential area,” says Sharma. Sharma filed a complaint with BMTF recently.

Since Dr Rajvir P Sharma took over at the BMTF nine months ago, he has opened the doors of the organisation to complaints. Sharma is an IPS officer of the 1987 batch of the Karnataka Cadre. He is also a medical and law graduate, and is a President Police Medal winner. He also specialises in forensic science. 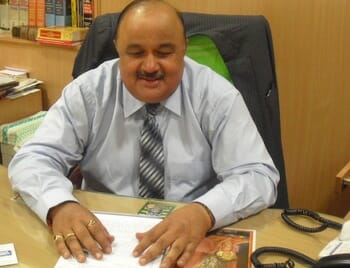 The BMTF was formed in 1996 under the state goverment’s Urban Developent Department (UDD) to detect and investigate offences and prosecute persons indulging in unauthorised occupation of lands/property belonging to government and government organisations in Bangalore Metropolitan Area.  It is supposed to work as a watchdog. It has a police wing (prosecution), town planning wing (for inspections) and an administration wing.

Working with Sharma in the BMTF is B Radha, Deputy Director of Town Planning. “We have received around 125 similar such complaints from residents across Bangalore. We don’t have power to take action against the builders but can take action against concerned BBMP engineers”, says Radha.

“BMTF has given notices to 132 BBMP engineers a week before for their irresponsible attitude”, says B Mallikarjun, superintendent of police BMTF, referring to engineers allowing illegal buildings to stand.

Sharma acknowledges that BMTF became active after he assumed charge. “We have given an opportunity for citizens to file complaints against all sort of illegal activities. We have created a website for that or else citizens can come here and complain”, he says.

On August 8th, frustrated by BMTF’s threat of action against engineers, the BBMP Officers and Officials Association held a massive protest at BBMP headquarters in N R Square. Over a thousand officials attended. The protesting officials demanded that a cabinet minister meet them and agree to take BMTF off their backs.

The commercial building in Jayanagar which was sanctioned as a two-storey structure in a residential area. BBMP declined to act on the owner citing an injunction the latter had brought about through civil court. Pic: Sankar C G.

R Subramanian, president of the offiicials’ association questions the jurisdiction of BMTF, despite the fact that legally BMTF appears to be in the right. “BBMP officials are working under Commissioner, and BMTF cannot take action against us without the commissioner’s permission”. Subramanian is questioning the independence of BMTF.  “If we do anything wrong commissioner can suspend or dismiss us but not by BMTF”, he says.

Manoj Devinder Pukale, a high court advocate, disagrees with Subramanian.  “BMTF is a regulatory authority and it can take action against BBMP engineers if any violation happened. Protesting against it and claiming exemption is absolutely reckless”, he says.

On August 8th evening, the mayor and deputy mayor agreed to meet the chief minister over the matter.

D Venkatesh Murthy, Mayor told Citizen Matters on August 9th that he had met Chief Minister Jadgish Shettar and Deputy Chief Minister R Ashoka on 8th night and that the protest had had its impact. "They (CM and DyCM) have assured me withdrawal of the particular power of BMTF, by which they have taken action against the engineers,” Murthy said.

However, Murthy was cautious about the implications. “I am not saying our engineers have not done anything wrong", he added, saying that he acted because of the "standstill" status of work at BBMP the protest had caused. "All the cases against engineers will be transferred to the concerned police stations,” he said.

It is quietly accepted in Bangalore that BBMP engineers take bribes from violators and keep mum over complaints.  “In front of me an assistant executive engineer took a bribe from an illegal building owner. The owner and engineer threatened me for giving the complaint against illegal building,” says a local resident of Jayanagar on condition of anonymity.

BBMP itself admits to this. S S Kandre, public relations officer at the BBMP,  says “We know our engineers are not honest. The one who has to curb the violation fails to follow the rules.” Kandre also admits that the Technical Vigilance Committee under the BBMP Commissioner (TVCC) formed in 2006 is also a failure.

If a BBMP engineer fails to take action on an illegal building complaint, the petitioner can file a complaint directly to BMTF

"BMTF send notices to the public servants on receiving complaints. If the public servant fails to respond in seven days we send another reminder letter and give ten more days. If he fails again, we will do inspection and file a case against him." — ADGP Rajvir Sharma.

Kandre though says that BBMP wants BMTF to come under BBMP.  “To curb illegal violations BBMP is planning to draft a proposal to Urban Development Department to bring BMTF under BBMP”, he says.

Rajvir Sharma though, is a tough cop and does not take lightly to BBMP’s proposal to bring BMTF under it. “They might not have read section seven of Indian Constitution. It says clearly that no authority can interfere into the proceedings of police department”, he snaps.

Currently, BMTF is short of manpower and has also being functioning inside different room within BBMP headquarters. “We are running short of staffs and we don’t have a building. But that does not matter if I have a good number of people to work with me. The public and the officials should be honest then all authority can perform well”, says Sharma. BMTF will soon move to a new office in the Shantinagar BMTC headquarters, he adds.

It remains to be seen whether the chief minister intervene and whether BMTF’s powers will be clipped. ⊕

The round robin matches of the tournament will begin after the pool matches are completed on 28th September.