The acronym RTO evokes a mixture of worry, apprehension and confusion in Bangalore city’s novice vehicle owners. Right from collecting of documents to taking time off other routines to clear tests for that coveted license- it is serious business. This article attempts to make the procedural route to obtaining licenses at any city RTO simple and lucid.

All about Learner’s Driving License

A valid Learner’s License (LL) is a pre-requisite to get a permanent Driving License (DL).

The objective of a Learner’s Driving License is to officiate the process of learning. That is, if you are enrolled in a driving school or are being guided by a tutor, your having an LL authorizes you to handle a motor vehicle

The Learner’s License is valid for 6 months. 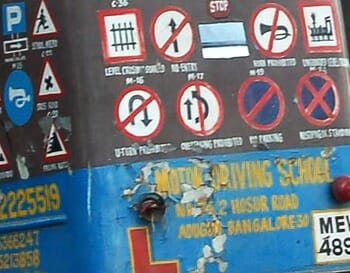 One has to be over 16 years of age to obtain a 2 wheeler LL. Those between 16-18 years are given LLs for gearless, 50cc vehicles only.

4-wheeler LLs are given to anybody over the age of 18 on passing an oral/written test on signs and traffic rules.

For commercial vehicles, those with LLs must enroll in an approved Transport Driving School.

Points to note for LL-holders

Those holding 2 wheelers Learners’ License are allowed to ride with only their instructors riding pillion. It is forbidden for others to ride pillion.

If you are stopped by traffic policemen during routine license-checking, assuming you have not broken any traffic rules, nevertheless, you stand the chance of being penalized if

Where to get the license?

The Learner’s License is obtained at the RTO designated in your area. All RTOs remain open between 10 AM and 5.30 PM. The test and application procedures are conducted only between 10 A.M and 1.30 PM on weekdays.

If you are applying for a license without the aid of a driving school, you will have to go to the RTO whose jurisdiction your locality falls under.

The addresses can be found here: http://rto.kar.nic.in/help.htm

You can start with downloading the form from: http://rto.kar.nic.in/form2.pdf

For help in filling the form, refer to http://rto.kar.nic.in/guide.htm

You can also fill it online at: http://rto.kar.nic.in/default14.asp (though this was not working as on 25 August)

It is imperative that you walk in to the test, fully prepared. Make sure the application is complete. The photographs must be pinned in a small cover to the application form. All the copies of documents must be attested. Also, take the originals along with you.

Once all the necessary documents are presented, you will be put through a simple written test on rules and signs (either oral or written).

The reputation of RTOs being hard on those who do not apply for licenses through agents/driving schools is not entirely unfounded. That gives you reason to take the test (especially oral tests) seriously and try and answer all the questions correctly. The documents should all be in order and the photographs must be pinned in a cover at the front. And it pays to be extra-courteous and attentive to what the inspectors say. These little measures could help for smooth sailing at the RTO.

You can prepare for the written test and signals at:

If you fail the test, you can resubmit the form and appear for the test again the next day.

All about Permanent Driver’s License

The Driving License is valid:

The form is available at http://rto.kar.nic.in/form4.pdf

For a Permanent Driver’s License, applicants are tested on their driving skills. An Inspector from the RTO conducts the driving test. You will have to drive through the RTO’s designated driving track and will be tested on general driving skills and adherence to rules. For specifics, you can read the text of the Motor Vehicles Act, 1989 (Driving Test).

Again, this procedure is under cloud as it is feared that applying for a DL independently puts people at a disadvantage.

“The most common reasons for inspectors rejecting DLs” said a driving instructor,” is the lack of confidence in drivers, poor knowledge of signals, signs and rules, and of course bad driving at the test” (discounting allegations of corruption).

It may be a good idea to not take the test until you are perfectly sure about your driving skills. “And yes, funnily enough, people simply forget to make hand signals at the test because they are not used to them on the roads”, he adds.

If you fail the driving test, you can reapply after a week, by paying only the Driving Test Fee (Rs.50).

How do I transfer a license issued in another country?

If you have a Driving License from another country, you will need to apply for both a Learner’s License and a Permanent Driving License. You are, however, exempted from taking a Driving Test.

For transferring a non-Indian Driving License:
1) Submit an application for Learner’s License (Form 2) to the designated RTO, with address proof, and all other documents, photographs etc.
2) Submit a Residence Permit issued by the Police Commissioner.
3) Submit an application for Permanent Driving License (Form 4) with necessary documents, photographs, etc.

Do I need a medical test?

Medical certificates are compulsory only for applicants aged over 40 and for Transport-vehicle licenses. The medical certificate need not be submitted for other licenses (Two, Four wheelers) if you are under 40 years of age.

My Learner’s License is not valid any more. Will it be renewed?

The RTO no longer renews Learner’s Licenses. You will have to redo the entire LL procedure to get an LL anew.

What are the recommended documents for address proof?

The best document to present for any government-related application is the Passport. It singly makes for proofs of age, address and nationality.

Else, if you are a new resident in the city and your passport is registered to an address that is not the same as the residence in this city/don’t have a passport, you can submit a copy of

How do I transfer a License issued elsewhere in the country?

A driving license issued in an Indian RTO is valid throughout the country. But if you have moved permanently, it might be a good idea to change the address in your license. You can request a form for change of address at the RTO counter. Fill the application form, and submit address-proof for the new address. This is applicable only for Permanent Driving Licenses. Note that, if you previously had only a learner’s license, you will have to reapply and retake the test. ⊕

What to look for in a maternity hospital?

How do you select the hospital in which you welcome your baby? What to pack for the hospital stay? What care should be taken?

What is the duty of an MLA; What are the privileges?

An experienced developmental activist and member of various state and national committees, Dr. Balasubramaniam offers this primer on the criteria, responsibilities, powers and perks of an MLA.

What should students in their 10th or 11th standards and their parents need to keep in mind?