On July 31st, Seema (name changed) was attacked by the driver of the auto in which she was travelling. Seema’s fault was that she took a picture of the number plate of the auto so as to file a complaint against the overcharging driver. The incident occurred in front of Eva Mall in Brigade road.

In the Facebook page of Bangalore Traffic Police (BTP), Seema wrote that the driver had asked for Rs 60 to travel from Eva Mall to Austin Town, while the actual fare would be around Rs 20. The incident happened at 7 pm. Soon after, she called the traffic police’s helpline 25588555 that accepts complaints against auto drivers.

When Seema posted about the event on Facebook, BTP responded that it could take action only on the issue of overcharging, but not that of physical attack. For that, a separate case had to be filed with the local police station. 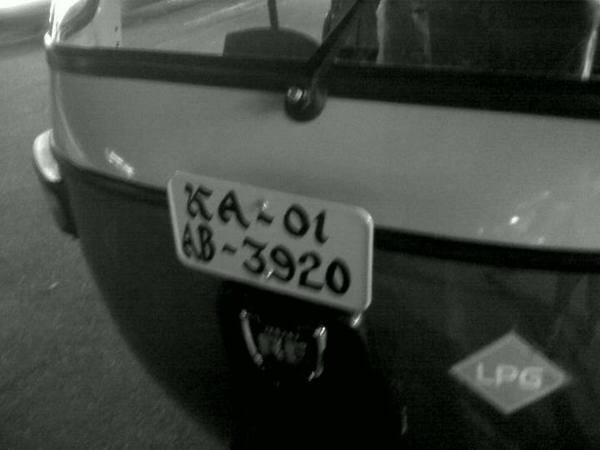 A snap of the auto’s number plate posted by the victim on BTP’s Facebook page.

"I also contacted ACP (Traffic) M A Salim, who also gave the same response. I have not got any response yet to the complaint lodged," says Seema, a day after filing the complaint.

She has now filed a complaint at the Ashok Nagar police station. H S Jagadish, the Inspector here, says that only a complaint was filed and not the FIR, since the offence was non-congnisable. (Police lodges FIRs only for cognizable offences.) "Threatening or attempting to assault someone is a non-cognisable offence. If a person has been assaulted, it is treated as a cognisable offence," he says.

In this case, once the driver is tracked, he can be taken to court, and court will levy a fine. "The amount will be decided by the court, and we can let him go with a warning," says Jagadish. He says that the driver has not been tracked yet since the address as per the vehicle number led to the owner. "We will track the driver in couple of days."

M Manjunath, President of Adarsha Auto And Taxi Drivers Union, says that police stations should register all auto drivers under their jurisdiction, to track them in case of complaints. "In assault cases like these, we support passengers. The system of displaying driver details in autos was initiated to prevent such cases. But some 20% of auto drivers are goons who do not follow this rule. Traffic police can levy Rs 2500 as fine for this, but they have not been doing this."

He says that rogue drivers mainly hang around in crowded areas like Majestic, Shivaji Nagar, MG Road etc., and that the union has been speaking to the police about getting all drivers registered.

If you drop in to Kempegowda Bus Stand (Majestic) on 15th and 16th, you might be able to get a bus to your destination without reservation. On the other hand, if you decide to reserve your tickets, you will be saving some money too.

After a prolonged legal battle, the Meistripalya kere in the heart of Koramangala will be restored and revitalised by the BDA, much to the relief of residents.