Around 20 sports enthusiasts gathered at Christ University to be part of the platform, that brings sports personalities and sports management companies together. The idea is to highlight lesser known sports and discuss possibilities of building a better platform. The meet was held on 21 July, 2012. The meet was organised by ProAthlete, a company set up by city’s sports enthusiasts.

This was their second such meet.

Chitra Gangadharan, former Indian Women’s football team goalkeeper kick started the description by pointing out that there aren’t enough tournaments for women unlike in men’s football. She attributed it to lack of seriousness towards women sports. She urged schools, colleges government to encourage more women to participate in the games. She also mentioned that corporates need to support women athletes. All this she said would help women sports to be taken up seriously and respectfully. 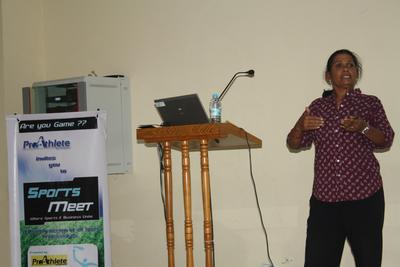 Elaborating on what sports does for women, she said, "Women gain confidence, learn art-of-living, have wider access to public space and understand equality if they indulge in sports. Parents, teachers and government should work toward this."

The organisers also called upon players from different backgrounds, that are more often are neglected by the media.

Dipankar Paul, an Ironman athlete was called upon to share his experience. Ironman is an triathlon event consisting swimming, biking(cycle) and running. He talked about his 2011’s journey to France where he swam for 3.4 km followed by 180 km Biking and concluded with 42 km marathon. He said, "It’s tiring and even after one month post the event my leg ached."

Vijay kant Tiwari gave the account of his struggle faced by physically challenged players in India. He plays for disabled team for India and played against Pakistan recently. He was all praises for Pakistan’s hospitality and said that the overall experience in terms of being recognised and appreciated, was better than in India. He said, "We can play cricket and proved our mettle. Disable cricket team have won against BCCI’s Indian B team. Even then we don’t get our due."

At the event, a new sports magazine, Scoreline, was also introduced. The sports management company, Krossover, specialised in analytics part of sports explained how it adds value to sports.

Subhajyoti Banerjee, one of the organising members says that their goal is to create an ecosystem where sports professional, enthusiasts, sports management companies, journalists, students and other would share their knowledge and experiences. He adds, "It would be a platform to know the businesses involving sports management as well knowledge sharing about the sports."

Pro-Athlete plans to conduct the sports meet every month. This place is open for all sports enthusiasts for a small fee. For details get in touch with Subhajyoti on subhajyoti.banerjee@gmail.com⊕

What irks the vendors of Gandhi Bazaar, Malleshwaram and Jayanagar is not old giving way for the new. It’s being treated as if they don’t exist.

Run for fun, it is addictive

Midnight marathon was the last marathon event of 2011, the top Indian runners were from Bengaluru. Why do they like running so much? How do they train for the marathons?