Earlier in May 2012, the Outer Ring Road between Marathahalli and Kadubeesanahalli gridlocked following a heavy downpour and the flooding of the underpass, one section (south going) of which was completed. The BDA Chief Engineer TN Chikkarayappa says, “We will collect fines from the contractors for all the violations once the work is completed.” 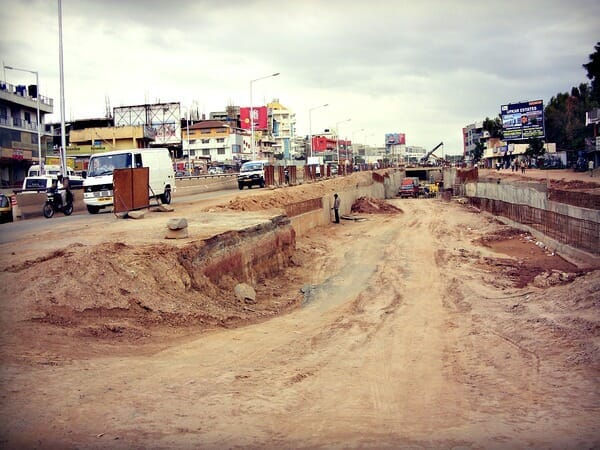 Work in progress at the Kadubeesanahalli underpass. Pic: Anisha Nair

The Rs 39.8 crores project contracted to Simplex Infrastructure Ltd., has been delayed. The deadline for completion of the underpass work was July this year. It has been extended to August now. The work will be completed by end of August and traffic will be allowed from the first week of September, says the BDA.

However, the process of restoring the service roads will take another two to three months. Chikkrayappa says, “These things depend on the company. We cannot give exact date on when the work will be completed.”

Though the BDA claims drainage work is completed and will prevent flooding, the next major downpour will be the real test.⊕

The Bellandur lake, which has provided drinking water and nurtured the city’s farming and fishing activities for over a century, is now a polluted and dying water body.

The Central government has submitted its plan to regulate the retail sale of acid, to the Supreme Court on Tuesday, 16 July 2013. In view of this, Citizen Matters reporter Bosky Khanna went on to do a reality check on the sale of acid in Bangalore. Here is what she got.

Pedestrian’s skywalk to be ready in three months

Pedestrians are always in peril, and many stretches on Outer Ring Road are extremely dangerous. MP has now promised a skywalk in Bellandur, named after a pedestrian who died there.