One of the three stone cutting units ordered to shut down in April is still functioning. While KSPCB says BESCOM has been asked to cut power supply, BESCOM officials say they haven’t received any written order in this regard.

This stone cutting unit is located in the Bank of Baroda colony in JP Nagar 7th Phase. KSPCB had earlier ordered all the units to shut down by 30th April. 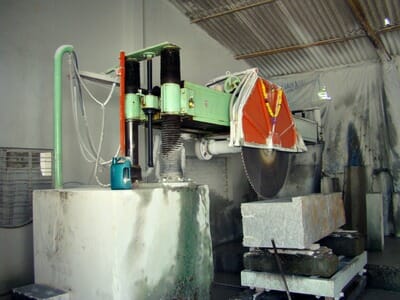 Sadiq Ahmed, Senior Environmental Officer, KSPCB reiterates that the action has been taken. He says, “We have ordered the BESCOM officials to cut the electricity supply for the units still operating. Further action will be initiated soon.”

However, Basavaraj, Junior Engineer, S6 subdivision, JP Nagar says that they have not received any letter from BESCOM. He says, “We need a written order to disconnect the electricity supply.”

Earlier, residents complained to KSPCB because of loud noise generated out of the three stone cutting and polishing units – Ashwini, Alankar and Vijaya.

The residents of Brigade Palm Spring, an apartment complex behind stone cutting units, met Sadiq Ahmed in February. After listening to them, Notice of Proposed Action (NPD) was issued to the unit owners. Also, a copy was sent to BESCOM. Citizen Matters reported this issue on 29th February.

Mahendra Kumar, owner of the Ashwini Granites, that is still operating says that he will take another three months to his new factory in Hosur. He adds, “Right now we are doing some finishing work from this unit and we have informed KSPCB about this.”⊕

Amid the usual problems of missing names from voter rolls and proxy-voting threats, people of namma city came out and voted in large numbers than ever before, on the Big Day.

Dealing with snakes and snakebites

Snakes can be found quite commonly in Bengaluru. Here’s a quick guide to what you need to do in case you spot one or are bitten by one.

Citizen Action Forum explains their position on the Elevated Corridor controversy — in the light of the recent court order in their writ petition.