In 1967, Suresh Shah, a Gujarati by native, started Sapna Book house in Majestic, around 100 square feet. Today the same book store is set up in a multistoried building in Gandhinagar. It is claimed to be India’s largest book mall by Limca book of records as well as India book of records. 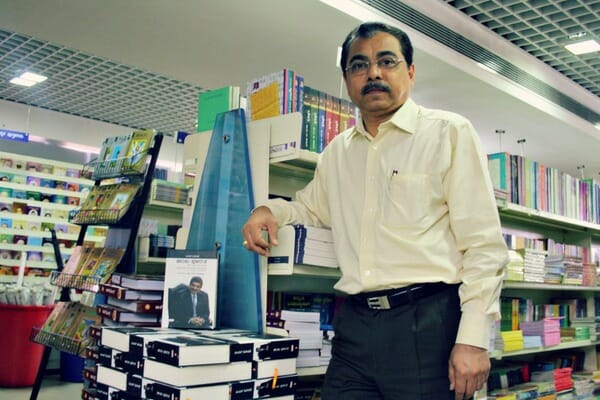 And 45 years later, it opened its eighth book store in Karnataka and 6th in Bangalore. This is in the time when book stores like ‘crossword’ recently shut down one of the stores in Bangalore. This may be attributed to the age of e-commerce and digitalisation. Citizen Matters spoke to Suresh Shah’s eldest son, Nitin Shah-MD Sapna Book House, about the growth and survival strategies and future plans of the book store.

How did Sapna come into existence?

My father Suresh Shah passed his SSLC in Mumbai but had no money to  continue with his education. He joined a book shop to earn some money. Later he was shifted as Assistant Manager is Chennai and followed by Managerial post in Bangalore. In 1967, he started on his own in Bangalore, a bookshop called Sapna Book House. It was a concept visualised by my mother, Bhanumati Shah. As you very well know Sapna means dream. She always persuaded my father to dream big.

Can you give a glimpse of Sapna’s  journey?

The first store was rented in Majestic around 100 square feet. It stayed there for few years. I joined in 1981 and planned to expand our book store along with my brothers. We took a bigger mall opposite present Tribhuvan Theatre in Gandhinagar and we slowly started growing. Then it was in 2006 that we expanded to ‘Sapna Book Mall’ and as per limca and India book of records it is india’s largest book mall. Today we have six book stores in Bangalore, one in Mysore and one in Mangalore.

Do you store only books? What kind of books do you retail?

Around sixty percent of the store accounts for books and rest would be stationery, multimedia products, sports item amongst others. We keep books from all verticals ranging from fiction, non-fiction etc,. We also keep ICSE, CBSE, NCERT, PUC, colleges, university, management, competitive books along with all different kinds. It’s more like a family store catering to all age groups. With these I am able to generate around 60-65 percent of revenue from books.

E-commerce companies like flipkart is luring customers with huge discounts and flexibility in payments etc,. How do you manage your sales?

These online companies in India are picking up undoubtedly, but are bleeding profit wise. I feel that they just want to build up their database because I see no reason for anyone to sell at loss. Still they are doing it and customers are happy.  But it doesn’t affect our sales. Firstly we have all variety of books for different age groups. Secondly, we  compliment our online business with the stock available in our brick and mortar store (Sapna Book House), so the books are abundant. Thirdly, with an Indian population of around 120 crore coming to the store – seeing and choosing has its own charm. Plus the subject also matters; books on photography, animal science, fashion is hard to find online.

Do you see e-commerce as a threat  to physical books stores?

For independent bookstores, like us, it’s not affecting at all, because we always have customer oriented approach. There may be times when we have to sell fewer copies but it doesn’t matter.  We are also strategising, our online book store also gives certain kind of discounts. People who are willing to do good service will definitely survive. We have plans to open few more stores across Karnataka.

So, how do you retain your customers?

We go as per our customer suggestions, after all we are here to listen to them. At the end of the day it’s the customers who are the kings. We tend to provide the best possible services. Like, the recent store at residency road, we have come out with products for babies and for infants from 0-3 years. It was suggested by the would be mothers and we took them seriously.

Is this turning out to be a survival model?

One need to have a broader view, keep whatever the customers demands and sell at the end of the day. Whatever may be the situation we will evolve. For example, our focus towards online has increased. My son after completion his PG degree is driving sapna’s online business. In the span of three months he has doubled the sales.

You also publish Kannada books, how did you end up doing this being a Gujarati?

We started publication of Kannada books way back in 1994, since I first met Dr Shivaram Karanth, a Kannada writer and Jnanpith Awardee. I somehow started liking his ideas, beliefs and we started publishing his books in Kannada. Initially we started with his 3-4 titles and later all his titles. We slowly grew in this field and today we have around 18,000 titles and we are the number one Kannada publishers in the state. We publish two titles a day.

What kind of books you publish in Kannada?

All the books are related to textbooks, diploma, engineering etc,. Most importantly we also translate english language books into Kannada language with permission from original copyright holder. Some of the important books we have translated into kannada are on Narendra Modi, Atal Bihari Vajpayee and L K Advani. Recently, in World Trade Fair in Delhi I came across with colorful text books (not NCERT prescribed) in English. I thought why shouldn’t local Kannada students get the same kind of books? Currently, I am on the verge of publishing 100 odd titles like this.

So how does Bangalore fare? Is the city tolerant towards multicultural approach?

I have travelled to other south Indian states and the acceptance is mostly visible in Bangalore. Out of all southern states, karnataka is the most tolerant state. Sapna and Bangalore has grown together and Bangalore is my first love.⊕

He’s the head of the Citizen Action Forum (CAF), an organisation of citizens and citizens associations who believe in offering solutions, not just pointing out the problem. Meet N S Mukunda.

Will DULT bring back cycles to Malleshwaram?

This ambitious project aims to create environmentally conscious pedestrian and bicycle friendly locality. Will it work?

“It’s great to earn money from something you love”

Meet Vasu Dixit who recently turned music-director with ‘Bengaloored’, a movie about the city. He is also a core-member of Bangalore-based fusion band, Swarathma.