Bengaluru has historically been known as a badminton stronghold for several decades now. It has been the proud home to the Prakash Padukone Badminton Academy (PPBA) which has groomed several champions at all levels. One only needs to visit Lalbagh or Cubbon Park in the mornings to see several of Bangalore’s citizens engaged in casual but keenly contested badminton encounters. 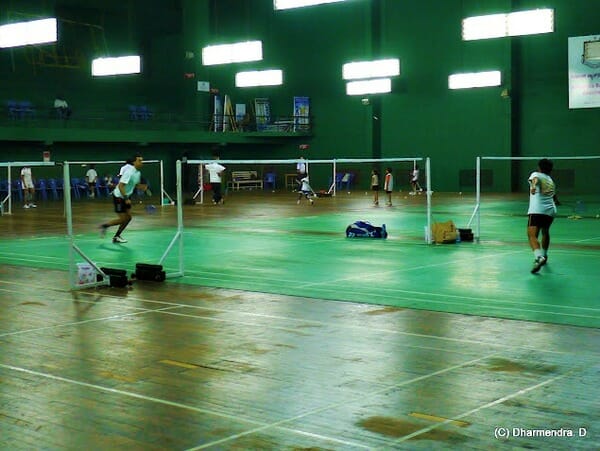 A badminton club in the city. Pic: Dharmendra D

Where can you play?

There are a number of private and public facilities in the city catering to badminton players of various age groups. Both casual and competitive players can find a space that is suitable. PPBA caters to Under-18 players and is sponsored by the TATA Capital. In addition there are other organisations that cater to badminton enthusiasts.

There are a host of other clubs and institutions such as the Canara Union in Malleshwaram, the Koramangala Club, the Indiranagar Club, the Domlur Club, the KSCA, the Reliance Club, the Woodrose Club and others, all of which have badminton courts and coaches. Some of these have “pay as you play” options while others provide access to guests of members only. Quite a large number of coaches at these institutions are either former players or those who have taken players to the top levels in badminton.

While some coaches as well as academies work only with talent they have carefully scouted over a period of time, there are others who are willing to coach beginners as well. This is especially encouraging to adults who want to take up badminton, having never tried it before. In fact, some coaches not only work with those with proven capabilities and with a history of success at junior levels, but also those who need one-on-one attention. This would be of interest to serious players with competitive intent, outside of the juniors’ circuit.

What does it cost to play Badminton seriously?

While the courts may charge anywhere from Rs 50 and above for the use of a court for an hour, the primary recurring expense for any badminton player is the shuttle. A single shuttle costs between Rs 40-Rs 100 and may sometimes not even last beyond a single game.

Thus players end up using over three or four shuttles in the course of a single day’s practice. A typical player may use up to three-four racquets a year and these cost around three thousand rupees per racquet. The shoes cost about five thousand rupees a pair which provide the much-needed footing on the wooden courts/synthetic surfaces. One may need as many as half a dozen pairs a year if you are a competitive player.

Coaching costs can vary from Rs 1500-2500 or more a month depending on whether you are a child or an adult. The number also varies from coach to coach. Add these up and a typical badminton player is looking at spending nearly Rs 1.5 lakh or more a year.

While sponsors step in to help out private academies such as the PPBA, the government has also played its part. Government has provided land for facilities, built facilities such as the National Games Village, subsidising the cost of the imported surfaces (which are rolled over the wooden courts) as well as other grants and awards to both individual players and institutions. For successful competitive players, jobs with public sector companies especially the oil marketing companies, also provide valuable financial support.

One of the heartening insights derived from talking to people-in-the-know on badminton in India, is that badminton seems rather well supported especially over the last decade. Although Hyderabad seems to have stolen a march on Bangalore in the last decade, thanks to the excellent badminton infrastructure which came up to support the National Games and other events. Badminton in India seems to have been well supported by both public and private institutions across the country, which can’t be said for too many other sports in the country.

The key issue that dogs the sport seems to be the alarming dip in participation from competitive junior players especially the moment they reach the class IX or class XII or II PUC as the case may be due to the pressure of board exams. While that may not be an issue unique to badminton, surely it is something that needs looking into if Indian badminton has to assume a position of global dominance.

All set to vote in the BBMP Elections 2015? Here’s a quick guide for you

The battle for Bengaluru is heating up, as the city goes to polls tomorrow. Here’s quick guide to how you can find your polling booth to cast your vote in the BBMP Elections 2015.

8th March 2010 – a hundred years since the idea of International Women’s Day (IWD) emerged. But, how many women know about it? And what does it signify?