Of the 24 teams participating from all over the country ‘Falcons’ and ‘Learning to Fly’ reached the final. In a mind boggling one hour, both teams fought tooth and nail for a win. It looked like it will be a tie with the 7-7. But ‘Learning to Fly’ snatched the winning score at the final moment.  Both teams were from namma Bengaluru. 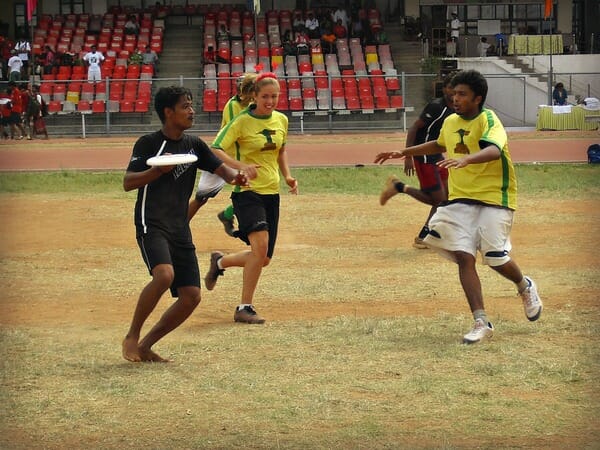 There were three other teams from city – Disco Diwane, Pineapple Jam and Spin Doctors. “In the previous year it was only three,” says Preetham Kajekar, one of the organisers. There were teams from Chennai, Hyderabad, Mumbai, Puducherry and Rajasthan which also participated.

Though there was no sponsor for the tournament everything was in perfect order for the three day Frisbee tournament which started on July 6th.

More than 200 players put their agility and dexterity to test over the weekend. All the matches were played at Kanteerava stadium and Central College over three days.

What is ultimate frisbee?

There are seven players on the field for each team. To score, one team must throw the disc into the end zone. When one team gets seven points, it’s halftime. When a team gets to 13 scores, the game is over. The age of members varies from 10 to 40 and the team was a mix of both genders.

At present five big Frisbee tournaments are happening in Delhi, Ahmedabad, Chennai, Bangalore and Auroville (Pondicherry). Unlike other four places, Bangalore Frisbee has got tremendous popularity due to increased participation.

“All our team members are connected through social media. The main motto behind arranging a tournament like this is to popularise the game and to promote helping mentality among ourselves,” says Naveen N Swami, one of the organisers.

Reasons for playing Frisbee was different from person to person. “This is the first time I am participating in Frisbee. It is really interesting and has a lot of fun. I will not miss it anymore,” said Varsha G, a team member of Air Force team.

Unlike other mainstream matches, Frisbee does not have a match referee; players rely mostly on advice from other players and personal judgment. Most of the players in the team are IT professionals and students from different states.

Popularity of the game has been increasing year by the year, as the number of team increased from 12 to 24, in three years for the Ultimate Frisbee in Bangalore. But Frisbee deserves more popularity than it’s actually getting, says Swami.

“At present we don’t have a central organising committee and rules for the play have not been implemented effectively. We expect to have both very shortly and definitely we can bring the game to mainstream,” says Swami.

The 74th celebration of the month-long carnatic music festival in Fort High School in Chamarajpet on the occasion of Ramanavami is back.