She calls herself a Jayanagar resident for 20 years now, but has resided in different localities across Bangalore, after shifting from Mumbai. A national award winner in journalism, Sakuntala Narasimhan, who is in her 70s, has authored several books on gender and music. She is also known for her activism on consumer rights. She is the only vocalist in the country who holds a grade ranking in both Carnatic and Hindustani classical music. She teaches music and travels quite a bit. 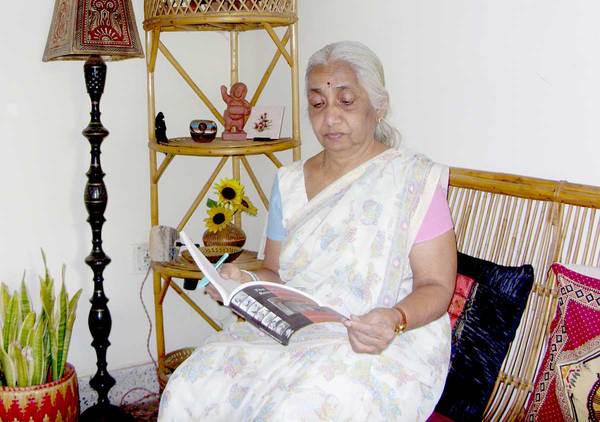 You have won several awards in music. How has your journey with music been?

My mother is a musician. My interest in music developed when as a child, I saw my mother engrossed in music. I have completed my PhD in musicology – my thesis was on comparative elements of north and south Indian systems. I have performed all over the country and abroad. I have authored three books on music – ‘A special issue on vanishing traditions in music’, ‘The Splendour of Rampur-Sahaswan Gharana’ and ‘Invitation to Indian music’. Now I travel to places like Chennai to judge and teach music.

What books are you working on currently?

Currently I am working on three books in bits and pieces. One book is on gender issue – ‘Trapped’. This book addresses the issues of working women. I am a feminist. I stand up for my rights and am free to do whatever I want. But when my husband or parents have some problem, can I say “I am a working woman, I am a feminist. I will not take care of them?”

Another book is called ‘Diary of a Do-gooder.’ It focuses on the problems faced by citizens when they try to do good to a society or someone in particular.

As a long time Bangalorean, what do you think is the major problem with the way the city is growing?

The city has been extremely messed up because it used to be a very peaceful, quite, tradition-bound, cultural city. It used to be called the pensioners’ paradise once upon a time. But now in the last 20 years with a lot of IT boom, youngsters are coming to the city in the IT professionals earning more than they know what to do with it. Now you have the right to spend your money and you can buy a car or a two-wheeler. But where will all those cars be accommodated? Even when you are not in the roads, where will you park those cars? People park them on the pavements, roads, and every corner that they find.

The other thing is, Bangalore is no longer popular for anything in particular. Sandalwood? Sweets? Nothing at all. Majority of people speak in either Hindi or English. It is because a huge proportion of the population is from outside. Bihar, Rajasthan, Uttar Pradesh. We used to get authentic Karnataka food everywhere in Bangalore.

But now, with people coming in from everywhere, the authentic restaurants have decreased with decrease in demand. Now we have to search for authentic Karnataka restaurant, and that too, we might not find. When foreigners come and want to have Karnataka food, we literally have to hunt for the place. You get chole bhature, Chinese and north Indian (food) everywhere but not that.

I am not saying we should always be tradition-bound. But we should take some kind of pride in saying that Bangalore is famous for something at least! That local flavour and local culture is gone! Bangalore is in the state of flux and that is very sad.

You have spent many years in Jayanagar. How have you seen Jayanagar develop?

When I came, Bangalore was different. In 1990, Jayanagar was not a commercial area. We had bungalows all along the roads and it was purely a residential area. My father and his friends had bought houses here in two lanes. The entire area was full of residential houses and we had neighbours. Just look at it now, I have a commercial complex next to my house and I am the only resident in the whole lane. This is horrifying.

And there is absolutely no accountability.

You are also very active in consumer rights protection. How do you think can the consumers be made more aware of their rights?

It’s only through linking. I have been saying this again and again everywhere I go. If one person goes and raises voice against anything, no action might be taken. Once I went to a bank to complain for a cause and the manager tells me, “Neevobbre barta iddeera. Inyaru barta illa. Nimagenu bere kelasa ilva?” (You are the only one who complains here. Nobody else comes. Don’t you have any other work?)

But if a society as a whole raises voice for a cause, don’t you think it will make a difference? Even if 3000 people join hands and stand in front of the officer and express their concerns, it will be addressed immediately. And it is happening gradually. A lot of Residents’ Welfare Associations (RWAs) are trying to mobilise the crowd and get things working.

What are your favourite hobbies?

Writing books on the issues close to my heart is what I do in my free time. Apart from writing regular columns for newspapers and magazines, I am working on books. I teach music and go to a lot of places to take part in it. I do not get time to do anything apart from that.⊕

Rs 350, time and sanity: What a missed rail yatra cost me!

The author missed the train during Bengaluru’s recent Rail Yatra, and her ordeal afterwards shows exactly how good it will be for citizens to have a suburban train service to travel around the city.

An urban rail network: Light at the end for Bengaluru’s harried commuters!

Metro and Suburban Rail together can provide relief to Bengalureans tired of traffic. A rail network will soon serve almost all parts of the city.