Did you know that of the innumerable road humps (or speed breakers) in the city, only 282 are authorised by the Bruhat Bengaluru Mahanagar Palike (BBMP)? All the others, according to the BBMP, are unauthorised and do not have any mention in their records. This fact was revealed when BBMP responded to a RTI application regarding the same recently.

Most of us are troubled by the road humps we come across every day. It’s a common feeling that some of them are not required at all, while some of them appear to be hastily put up with no concern for ergonomics, causing damage to motorists’ spines and vehicles’ suspensions. A lot of these humps do not even have white lines marked on them so that they stand out from a distance.

On 12th June last year, Anil Kumar, RTI activist and a member of Kria Katte, an NGO, filed an application to find out if all the road humps in the city were authorised. Negotiating the humps day after day, he had developed problems in his spinal cord, like many others. “Riding my two wheeler (on the humps) had made my life difficult; the growing problem prompted me to file a RTI application to know the reality behind the numerous humps” he says.

Kumar got the response on 11th January this year. He was not surprised to find that a lot of humps were unauthorised, and were not found on BBMP records at all.

Vital statistics of a road hump 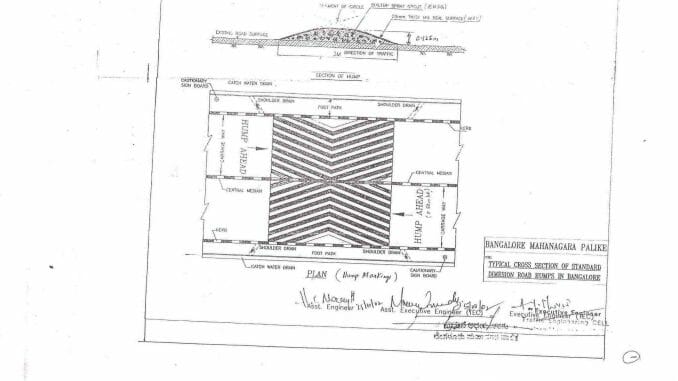 Not surprisingly, these rules of the IRC are not available with the BBMP, and thus, not many of the road humps are built according to these standards.

No markings on this hump on the BTM Ring Road that connects Silk Board and Jayadeva Circle. This is where Suryaprakash Chavan met his end. Pic: Supriya Khandekar.

Coincidentally, around a month after Kumar got the reply to his application he got to know about a fatal accident on the BTM Ring Road (between Silk Board and Jayadeva Circle) that occurred because of an improper hump. Suryaprakash Chavan, 22, was on his way back home after dropping his friend in BTM Layout at 12 midnight. One of his friends Swagat Senapati was also with him on another two wheeler. Because the road hump was unmarked Chavan missed it; his motorbike jumped the breaker and he hit the divider. Chavan died on the spot.

There was no traffic police at the time of accident, and the Inspector at the Madiwala Police Station filed the FIR. The Inspector who signed the FIR (without writing his name under the signature) has mentioned in the FIR that this accident happened because of driver’s negligence, even though eye witness Swagat Senapati’s account (Reg no: 2/2008/24 Sec 174 CrPC) , signed on the same date as of the accident, is with the same police station.

After this accident, G M Chavan, (Suryaprakash Chavan’s father) contacted Kumar for help and fresh applications were filed to get details about the BTM Ring Road humps in particular, and a second appeal was also filed with Karnataka Information Commission. As convenor of Kria Katte Anil Kumar has been following up with the BBMP to get the unscientific humps modified. The case was first heard between 2nd and 7th June this year. The next hearing is on 24th of this month and another hearing with the Police is scheduled for 14th November.

“The continuous poking has changed the mindset of the BBMP and the Police. The BBMP has already called tenders for modifying 400 humps in Bangalore, divided into 10 packages,” says Kumar.

This accident might be just one example of the horrifying and irrevocable effects of unplanned and unscientific road humps on the lives of motorists. But similar cases and other minor accidents happen every day. At the very least, this RTI applications have set a process in motion for standardising these otherwise dangerous structures on Bangalore’s roads. ⊕

References
The Indian Road Congress (IRC) is the premier technical body of Highway Engineers in the country, and came into existence in December 1934. It is a national forum for sharing of knowledge and pooling of experience on subjects dealing with the construction & maintenance of roads and bridges, including technology, equipment, research, planning, finance, taxation, organisation and all connected policy issues.

Think, suggest, object; It’s your Ward Committee after all!

Yes, Bangalore can have a better citizen-centric governance if you can suggest rules that will hold Ward Committees accountable. You have just 20 days.

The reality of online learning in Bengaluru’s govt schools

Children in government schools are facing a huge learning gap, as they hardly have live online classes, unlike private schools.