Last year, BBMP initiated a plan to install Rainwater Harvesting (RWH) pits in roadside drains, parks etc,. to improve ground water levels. Rs 30 crore was approved for installing pits across the city, from emergency funds. Emergency funds are allocated as per BBMP Commissioner’s discretion, and is separate from funds specifically given for RWH in the budget. But going by BBMP’s plans, much of this amount might simply be wasted. 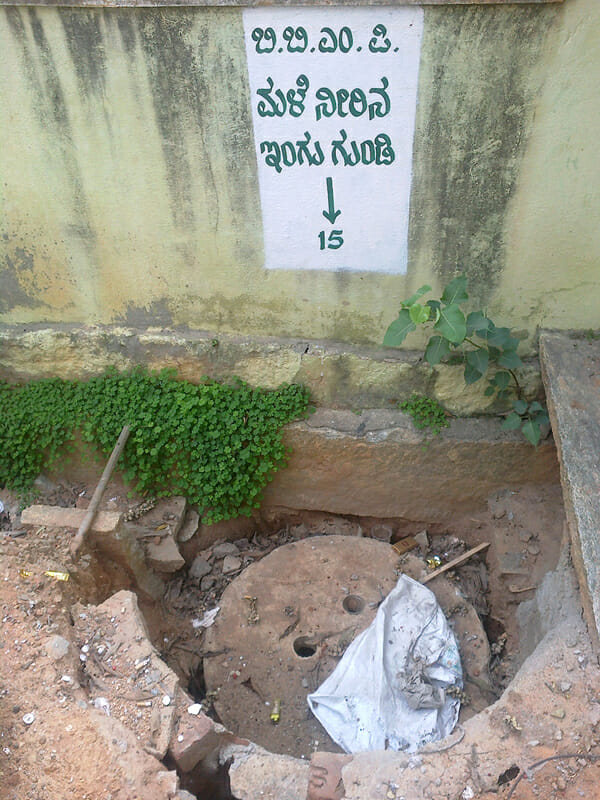 The project is supposed to be implemented as per the design made by RWH expert A R Shivakumar. Shivakumar is principal investigator-RWH at KSCST (Karnataka State Council for Science and Technology), of IISc (Indian Institute of Science).

Not the expert’s design

Shivakumar had given a presentation to BBMP Commissioner and other top officials on the design and estimates to be adopted. But in many wards, BBMP engineers have adopted their own designs, which RWH experts say would not stand a chance in the rains.

Wards like Rajajinagar and Basaveshwarnagar have adopted Shivakumars design of an open (empty) pit. Some others like Arekere and Puttenehalli have adopted a different design, in which the pits are not open, but are filled with granite gravel and sand throughout. In both wards, 50 such pits will be dug on road side drains; each pit costs Rs 50,000. Combined, they cost Rs 50 lakh.

Shivakumar opines that the design in Arekere and Puttenahalli wards are not fit for roadside drains, but are meant for big compounds. “It would work in large spaces like Vidhan Soudha. If used in roadside drains, water will not seep through and the pit will be clogged in a few months.”

Rain water expert S Vishwanath says, “The sand and granite jelly (gravel) can be easily eliminated from the design, or else replaced by large boulders. If there is sand in the recharge pit, it will have to be cleaned after every rain; else there will simply be no percolation into the ground.”

Will it be effective?

He says that BBMP should have made one or two recharge pits initially and tested its effectiveness, rather than digging all pits at a time. “Is there an understanding of the location of pits and the nature of the soil? For example, if the soil is clay-like, the structure will not work,” he says.

The effectiveness of the pits can be measured only after one or two rainy seasons, by checking if water levels have risen in the nearby borewells. 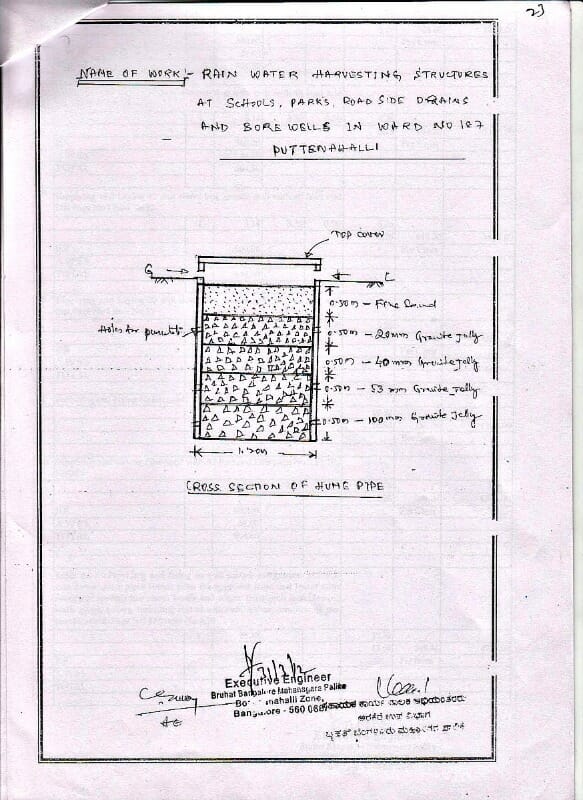 Narasimha Babu, Assistant Executive Engineer (AEE) at Puttenahalli and Arekere wards, says  that the design was adopted from another zone, but was not sure which zone it was. “Works have already been done in Jayanagar with this design.”

His justification for the new design seemed specious. “With open pits there is a chance of someone removing the mesh and people falling in. They are difficult to maintain.”  When pointed out that there would also be a reinforced concrete slab along with safety mesh covering the pit, Babu said that there was still a chance of accidents.

The design for each ward is made by the concerned AEEs and AEs (Assistant Engineers). These are then approved by the Executive Engineer, Chief Engineer and Joint Commissioner of the zones. BBMP head office is not involved with the design approvals. Srinivas Murthy, Executive Engineer at Bommanahalli zone who had approved the Puttenahalli and Arekere projects, were unaware of the design change. He had initially said that Shivakumar’s design was adopted.

B S Prasad, Chief Engineer (RWH & OFC) at BBMP head office, says that he is not aware of specific designs as they are made at the ward level. “Our job is to only monitor the projects and get data from wards. Design approval is not routed through us.” He says that all 198 wards have started the work, which will be done in phases, but that the department has not received the entire Rs 30 crore yet.

Additionally, the estimates for works also seem suspect. Companies that handle RWH projects quote much lesser amounts. On being shown the design, one company Refurb-India quoted only Rs 20,600 for the Arekere-Puttenahalli project, and Rs 22,900 for the Rajajinagar-Basaveshwaranagar project. The latter, as per BBMP estimates, would cost Rs 39,000. BBMP says that the estimates were prepared as per current specifications, and hence there is no inflation.

In Puttenahalli and Arekere, the works on drains are yet to take off. Though tenders were called last year, BBMP has not got any responses for those; the tenders are again open for bidders now. Works in open spaces have started off.

Hakoba, fabric of the royalty

From the being the fabric of the royalty to going contemporary Hakoba has remained relevant. With affordable pricing it has a wider appeal too.

What can be the parents’ demands to schools do ensure safety of children? Here are some lessons drawn from Vibgyor school incident.

The laws on water preservation, air, environment, forest and wildlife are being revised. This is your chance to stand up for what you care about. The consultation will be held on September 27 at 12 noon.