In the last few years, a large part of the city’s low lying areas were affected by flash floods, due to heavy and continuous rains. The RWA members of these areas have been trying hard to get BBMP and BWSSB to fix these issues. This year practically all roads have been dug up for either laying BWSSB pipes or for new flyovers. Will BBMP re-lay the roads in time? 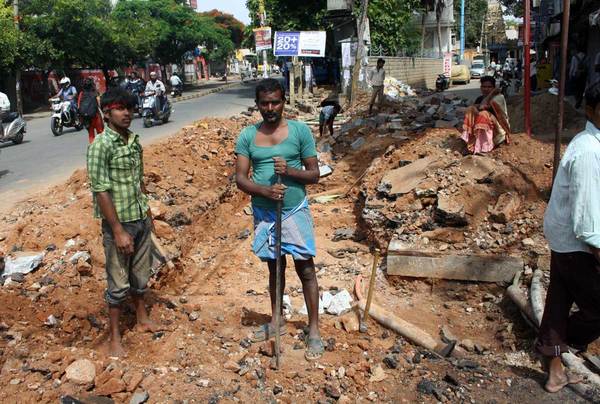 BBMP has taken up desilting the Storm Water Drains (SWD) in the four valleys – Koramangala, Hebbal, Challaghatta and Vrishabhavati, to ensure proper flow of rainwater. They have also appointed officers to keep track of complaints. Areas like Koramangala, JP nagar, Jayanagar and BTM layout are among the  low lying areas in Bangalore prone to flooding.

BBMP has divided the city into eight zones – East, West, South, Rajarajeshwarinagar, Bommanahalli, Yelahanka, Dasarahalli and Mahadevapura. Each zone is looked after by a Joint Ccommissioner and Chief Engineers. Executive engineers look after sub-divisions. Areas that flood at 60 mm rainfall have been identified as flood-prone. BBMP PRO Shivasharanappa Khandre says “We have established control rooms at such places and appointed people who will immediately call our control rooms in case of emergency.”

Residents not confident of BBMP’s preparedness

Many places in  Jayanagar, JP nagar and BTM are dug up. Khandre  however says, "We have issued a circular to the concerned engineers and have asked them to cover up the roads as much and wherever possible. For the remaining places, we will make sure there are no floods by taking up complaints and working on it immediately."

N Mukund, RWA member from Jayanagar 5th Block, feels that places like Gurappanapalya are always flooded during monsoons. He adds, “Every year there is some noise in council over preparation to tackle monsoon but there’s no solution.”

Ravishankar P V, Vice-president- JPNCA, complains that 14th Main beside VET college, floods every time. He says, “Lot of garbage including plastic, gunny bags, etc, get stuck in the pipe and water overflows on the road.”

BBMP’s efficacy is not trusted greatly by the Koramangala and HSR Layout layout residents either.

C H Ram, an RTI activist from Koramangala, feels that there cannot be a solution because the roads are never built according to the norms. He believes that a contractor bribes corporators and MLAs to get a contract, and to get the payment released, again bribes the Chief Engineers. He says, “The contractors also need profits and it is obvious there will be compromise in quality.”

Khandre, on the other hand, says, “We have cleared the storm water drains in all the four valleys. But it will again collect silt. So we have to keep the work of clearing the drains, desilting, etc, on.”  He adds that filling potholes are an ongoing process and it is not a monsoon related exercise.

BWSSB adding to the residents’ woes

The BWSSB has also dug up the roads in HSR Layout for sewage pipe laying works. The whole idea behind the work is to separate the sewage water line from the SWDs. This will avoid polluting the rain water flowing through SWDs.

However residents of the area are complaining about open holes on the road. “Most of the roads in HSR layout like Mangammanapalya, 27th Main, 8th Main, etc, were dug up for pipe laying works but have not been tarred up yet,” says Sunil B M, Joint Secretary, HSR Layout RWA.

But BWSSB engineer in charge, who did not want to be named, says, “Sanitary lane (sewage pipes) laying work in HSR Layout is finished. The remaining asphalting works will be finished in a week.

Brig R S Murthy, President of HSR layout RWA says, “The authorities try to start functioning in a reactive mode once the problem of rains starts affecting the layout.” He believes that there is no commitment on the part of civic  authorities to develop permanent measures to prevent such problems. He complains that the dry periods available for execution of projects are wasted.

Last year, a budget of 40 crore rupees was sanctioned for the desilting of four valleys. This year, no specific budget will be allocated for it. There is also no specific budget allocation for other ongoing work like road asphalting, potholes filling, etc.

Khandre is however confident that the steps taken will be sufficient to keep the areas flood free.⊕

This time around, the judiciary is in no mood to allow Bengaluru’s city government to hoodwink its verdict on breakdown of zoning. A citizens’ group has been relentless to the hilt.

When will the BBMP wake up? How many people have to die before any action will be taken?