Beads of sweat trickle down Rohit Upadhyay’s face as he raises the air pistol and aims for the target at the far end. Concentrating at the target, he steadies his breathing and squeezes the trigger. He hits the target two circles outside the bull’s eye. It is Upadhyay’s first tryst with shooting and he is visibly thrilled. After completing his session, he says, “My experience with shooting had been limited to video games and balloon shooting stalls at fairs. This is intense. I might take it up as a sport,” says Upadhyay, 27, a software engineer and a resident of BTM Layout. 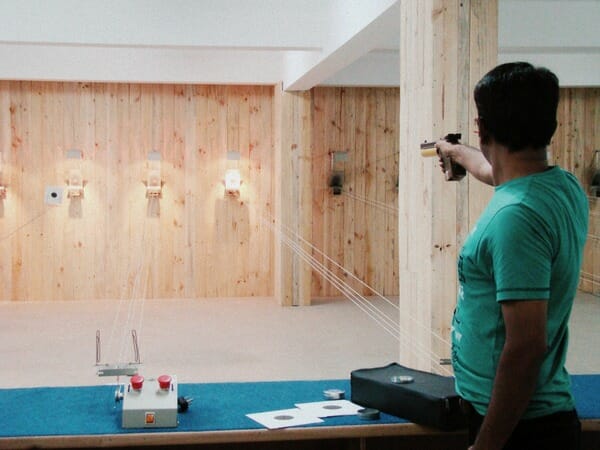 A shooter concentrating on the target. Pic: Yograj Mudalgi

Upadhyay is at the Nishaan Sports Shooting Academy in 2nd Stage BTM Layout. The only private academy sports shooting academy in Bangalore, it was started in July by Purushottam Kempaiah. It is quickly becoming a hub for sports shooting enthusiasts and professional players alike. The shooting academy, which has a 10 metre range, can accommodate ten shooters at a time.

The academy is currently training 15 shooters professionally, who come from as far as Doddaballapur. Ten of the shooters initially took up the sport as a hobby at the academy. One of them is Girish M, 35, a chemical trader by profession. “I came here just to try it out and I was hooked. I got better as my training progressed so I thought I can start preparing professionally,” says Girish, who comes from Vijayanagar and trains five days a week.

Purushottam Kempaiah, 27, took to sports shooting as an NCC cadet in college. A Sociology degree holder, initially trained at the Sports Authority of India and competed in the 50 metres air rifle section of the game. In 2009, he began training for 10m distance air rifle shooting category. He won the gold at the 5th national Police Sports Shooting Championship, conducted in October in 2011. He also won a silver at the 33rd national Sports Shooting Championship also in 2011.

Kempaiah, a professional shooter himself, started the academy because he felt the sports shooting scene in Karnataka, especially Bangalore, is underdeveloped. He says that it is the only such private academy in the state.

A one month course costs 2000 Rs. After the basic course, one can enroll for a yearly subscription at the academy at a cost of Rs 9800 per year. The academy has a repertoire of five air pistols and 14 air rifles including 6 imported rifles, which shooters can use to train. With a coupon for Rs 240 on snapdeal.com, you can shoot 30 rounds on a basic air rifle and 10 rounds on an imported rifle. The minimum age for entry is 12 years. The academy is open from 10 am to 2 pm and 4 pm to 8 pm. For further details contact -9740472540.⊕

A host of designer ventures focusing on chic and novel forms of the desi drape reveal the latest rage in the city’s fashion circles.

Eid Prayer at Jama Masjid, Bangalore, 2010. Muslims observed Eid-ul-Fithr, which is locally known as ‘Pernal’, offering special ‘dua’ (prayers), namaz and exchanging wishes, in Bangalore It is a tradition that all community members should

When the Physical Education students who are going to be instructors in future don’t have good facilities to train themselves, can we expect quality in sports?