Sometimes it is good to step back a few paces, to get a better view and perspective. So it was, that earlier this week I accessed the online editions of the city’s papers while travelling out of the country and got a stark perspective that hit harder than when I see the same cityscape in person. Under the lead items on June 20th, there was a video strip showing pictures taken around the city. One was of the homeless, huddled along a pavement, and another was of a swanky flyover with vehicles whooshing along a curve.

The contrast between the two images, juxtaposed, was unnerving — but the images were true. We have wretched poverty and fancy flyovers catering to vehicle-owning citizens of the upper classes, both co-existing, just as the two exist all over the country. But Bengaluru, with its reputation as a centre for modern technology — shouldn’t we  be doing better? 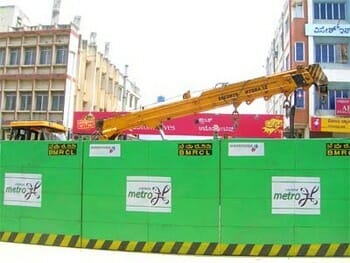 The crane moves at a construction site close to the Double Road junction. Filepic: Zainab Bawa

Among those homeless caught in the picture, are the thousands of migrant labourers who help build our fancy flyovers and underpasses. As one city-based activist quoted  in a recent  edition of Citizen Matters suggested, those working on the Metro ought to be  provided with housing, at least some basic shelters.

I have seen women with infants in arms, resting on a pile of sand at a Metro construction site facing Lalbagh West gate, and breast feeding the child before returning to her work as a daily wage labourer. The child was left to sleep in a dusty corner,  next to a heap of iron rods, exposed to the pollution of cement and noise. When the city spends hundreds of crores to  put the Metro in place, why does no one think of providing a roof over the heads of those who slog at the construction site?

How come we do not have laws mandating the provision of minimum facilities for those without whose inputs we would not have such fancy facilities as flyovers and a rapid transport system?

Another recent report in Citizen Matters was about medical clinics that continue to function without proper licenses despite notices issued by the  BBMP over the last 18 months. One of the comments on the report, said it succinctly — “the media publicises, people read, react , and  forget”. Quite. As a media person, it had me thinking about whether the media should be doing more, and if so, what and how. And as a citizen, it made me ponder over what we could do, as citizens, about overcoming public apathy.

Which reminds me — in the recent elections for the graduates constituency, not even a third of the city’s eligible voters exercised their franchise. Because we are “too busy”? Or too cynical, convinced that nothing will change, so why bother? For once we had the former Lokayukta himself seeking our support for a candidate, but he lost. In election after election, I have noticed, the candidates who have a clean image and are accepted as capable, lose out. Because mere capability does not ensure support, right ?

So where do we go from here? Ideas are available in plenty (most RWAs have lists of priorities), but it seems difficult to break through the gridlock of those entrenched in power and authority. There are times when I sink in despair, but I copied down a quotation last week — “It is only when you reach beyond what you think you can do that you will almost surely do far more than you thought you could.”

So, those of us among the minority of concerned citizens who despair over the state of the city’s affairs, let’s see how we can reach beyond what we think is possible. RWAs are grouping themselves into federations, and raising their voices. If only we could lend them a few more decibels… If Surat could emerge from a devastating plague epidemic and become a showcase as a clean city, nothing is impossible. It would be a pity, though, if one has to wait for plague before a city wakes up.⊕

Bengaluru did not have public bins, and bins have been a bone of contention among solid waste management enthusiasts working to solve the problem. Are bins the only solution for black spot problem? Or is there any alternative?

For many Indian Christians, Christmas has traditionally meant sweets particular to their region. Guava cheese, coconut fudge, rose cookies, snowballs and more. The beauty of food traditions lies in how each family can create its own.

Cleaning up? Do it the natural way

Forget coloured detergents and soap solutions. Instead use natural and safe home-made concoctions to clean your fridge, wash vessels and remove tough stains!