Prof. Elinor Ostrom, recipient of the 2009 Nobel Prize for Economics, passed away in Indiana, United States, on 12th June, after a short and intense battle with pancreatic cancer. Her life and her ideas hold deep significance for us in Bangalore.

In February 2012, Prof. Ostrom visited Bangalore for a few days, giving the T N Khoshoo Memorial Lecture at the Ashoka Trust for Research in Ecology and the Environment (ATREE). In addition, she was very keen to visit one of the sites of a recent research program that she and I had initiated last year to examine collective action and lake restoration in Bangalore.

Kaikondrahalli lake on Sarjapur road, which was recently restored through a collaborative effort by local communities and the BBMP, was one of the sites of this research, and she had heard much about this lake through the years that we have been working on it.

The lake community had gathered in full force to meet her on the morning of the 3rd of February 2012. She was 78 years old, had just got off a long plane ride and completed an intense three day visit to Delhi, and was even then battling cancer. Her energy and drive could always put people much younger and fitter to shame, however, and she enthusiastically undertook a trip around the lake boundary, asking many questions of the lake community, and suggesting to them that they invest in long term monitoring of the ecological condition of the lake, so that research and practice could go hand in hand.

She planted a jackfruit sapling – which is growing very well at the edge of the lake – and was very happy at the choice of species, commenting that as a girl she had a jackfruit tree in her garden in Los Angeles, and knew the tree well. 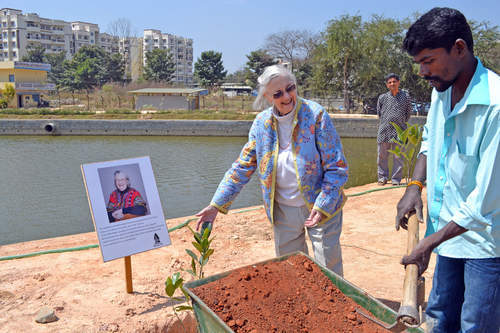 Internationally renowned for her research on the collective management of commons, Prof. Ostrom’s research has demonstrated the capacity for local communities to organise to protect shared natural resources – called common property – such as lakes, forests, grazing lands and fisheries. She and her colleagues systematically collected evidence that proved the potential for sustainable and equitable governance of natural resources in a manner where responsibilities and benefits were shared by all.

This line of thought went quite contrary to the opinion of many governments and conservation agencies, who assumed that local communities could only be capable of destroying their environment, and needed a benevolent dictatorial government to deal out rules and judgement from above. Lin – as she was popularly known – worked with colleagues across the world and drew on case studies from places as diverse as Nepal, Kenya Los Angeles, and Switzerland to develop a set of “design principles”, conditions under which local communities were more likely to be able to develop sustained, ecologically and socially relevant rules for management of their natural resources.

These design principles were rather simple, but very profound – for instance, one principle states that people are more likely to follow a set of rules if they have had some say in developing these rules themselves, rather than having rules given to them by someone else (say the government) and being told they had to follow them.

Another important design principle is that monitoring – and sanctioning of offenders through fines and punishments – is essential for protecting natural resources. Otherwise, one selfish individual can disrupt the entire effort of the group, and as she put it so eloquently “human beings don’t like to be ‘suckers’!”

Unfortunately, just a few months after her visit to Bangalore, this intellectual giant – who was also one of the most generous, open hearted and kindest of people – passed away. This is a sad and irreplaceable loss – definitely so for all those who knew her, but also those who did not. Her ideas have transformed the world and pointed to alternate, socially just and ecologically sustainable ways of governing our natural resources.

We have too few of our lakes, forests and fisheries left, and as she wrote in one of the last articles she published before she passed away, time is one of the scarcest resources at hand. She used the time she had well, writing emails, reviewing papers and composing letters of recommendation even from hospital in the last few weeks. This included sending a letter of recommendation to the UN commending the work of the Environment Support Group for utilising legal redressal mechanisms towards lake protection in Bangalore.

Our city was close to her heart, and she greatly enjoyed and often reminisced about her two brief visits to Bangalore – one personal visit in October 2008, and her second, more recent visit in February this year. She had read a lot about ecological and social transformations in Bangalore, and was looking forward to the next stages of a long term research project that we had started last year, examining collective action and conservation in the lakes of Bangalore.

Unfortunately, this was not to be so, although she was able to leave behind a solid foundation for this research. We are truly fortunate to have lived in a world touched and transformed by her ideas and ideals.

Visitors at Kaikondanahalli lake stop to see the jackfruit tree that Prof. Ostrom planted, and read about her work on community conservation. Pic: Harini Nagendra

One of the last articles she wrote focused on the need to look beyond international agreements at the Rio +20 summit and incorporate the diversity of grassroots movements that are working across the world to mitigate some of the impacts of climate change. This article can be read at:

A short, succinct lecture that brings out many of her essential ideas on community management of commons, which also gives a great sense of her verve, energy, and personality, can also be viewed at:
http://www.youtube.com/watch?v=ByXM47Ri1Kc

And finally, for those interested in knowing more about her views on the way forward for governance of Bangalore’s lakes, here is a video of her T Khoshoo lecture in February where she discusses some of our lake research, illustrated with photographs from Kaikondanahalli,Varthur and Bellandur keres. http://www.youtube.com/watch?v=MvoCNd6BqTM ⊕

Cleansing the system should begin now

We need to take the blame too, as residents. If exercising our franchise was a duty, so is the participation in decision-making. RWA meetings draw poor attendance, because they are not seen as “important.”

Celebrate Joy of giving by giving up

7.3 Bangaloreans in every one lakh suffer from lung cancer. Most of it is caused due to smoking.