Have you ever told the driver using a hose to clean the neighbour’s car that he is wasting fresh water, and his response is “Borewell Madam!” with the emphasis on the word borewell? And in a tone suggesting you are so dumb it’s a free and plentiful supply?  That is the crux of the water problem being faced in Bangalore today.

That is where education comes in. Where care should be taken by owners of borewells, to be judicious in their use of the water, just like they are with corporation water which they pay for. The Karnataka Ground Water (Regulation and Control of Development and Management) Act, 2011, was passed recently by the Karnataka Assembly, apparently without much debate. 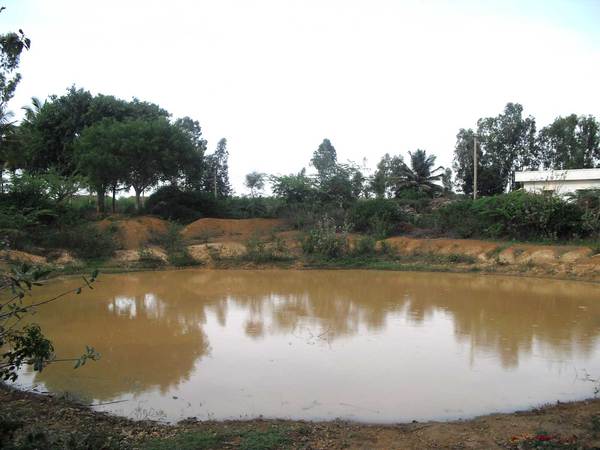 Bundhs built in Hoskote by farmers to hold back rain water to raise the depleted water table themselves. Pic: Marianne de Nazareth

The rules are now being notified for implementation and the objective of the groundwater bill, in so far as the city is concerned is the equitous and sustainable distribution with access to all. By law, since groundwater is a common property resource it is to be held as a public trust by the government.

Since the government does not provide water for construction, groundwater is frequently used for the same. With the city booming skywards you can imagine the havoc being created with the water table being over exploited by this industry. It should also be remembered that the poor and the economically disadvantaged, have the maximum dependency on groundwater, since they are not connected to the piped network.

In the context of this issue, we need to look at aquifers which are the source of water to a borewell. After all a borewell , is a hole drilled into the ground to penetrate an aquifer. Research says that an aquifer is a body of saturated rock through which water can easily move. Aquifers must be both permeable and porous and include such rock types as sandstone, fractured limestone and loose sand and gravel. Fractured volcanic rocks such as columnar basalts also make good aquifers. The rubble zones between volcanic flows are generally both porous and permeable and make excellent aquifers too.

Rocks such as granite that we get here in Bangalore, are generally poor aquifers because they have a very low porosity. However, if these rocks are highly fractured, they make good aquifers. Once a borewell is dug and an aquifer is accessed, such water must be pumped to the surface. This is where the problem arises. If water is pumped from a well faster than it is replenished, the water table is lowered and the well may go dry.

Ten years ago we sank a borewell in our farm in Hoskote. It was dug to 300 feet and gave us sufficient water to use drip irrigation for our orchard that we had planted.  When water is pumped from a well, the water table is generally lowered into a cone of depression at the well. Groundwater normally flows down the slope of the water table towards the well. An aquifer is filled with moving water and the amount of water in storage in the aquifer can vary from season to season and year to year.

In the hot season we found we had less water than in the rainy season, plus when the neighbouring farm dug a bore at 900 feet we found our borewell began to dry up. To help ourselves we dug a large trough around the bore to let the rain water collect in a pond and percolate down into the water table. It has helped slightly, but we have to switch the pump off and wait for a few hours, let the acquifer replenish itself, before we get water again.

Ground water may flow through an aquifer at a rate of 50 feet per year or 50 inches per century, depending on the permeability. But no matter how fast or slow, water will eventually discharge or leave an aquifer and must be replaced by new water to replenish or recharge the aquifer.

Thus, every aquifer has a recharge zone or zones and a discharge zone or zones. Therefore realising this, the government of Karnataka has begun to build check dams, in various places in villages, which have been instrumental in holding up the rain water and allowing it to percolate slowly back into the water table, thereby helping the farmers tide over their water woes.

The small pond too is another initiative to bring up the water table. Pic: Marianne de Nazareth

In the city too Rain Water Harvesting helps, where the rain is guided directly to your tank and harvested and the over flow goes into the borewell.” A number of dry borewells have sprung back to life with this method especially in the Sarjapur and Whitefield areas,” reveals Jeff D’Lemos, a RWH expert.

What is amazing is the ground water that we pump out from the acquifer is not only pure, it is also refreshingly cold. Aquifers are natural filters that trap sediment and other particles (like bacteria) and provide natural purification of the ground water flowing through them.

You can liken them to a coffee filter, where the pore spaces in an aquifer’s rock or sediment purify ground water of particulate matter (the ‘coffee grounds’) but not of dissolved substances (the ‘coffee’). Also, like any filter, if the pore sizes are too large, particles like bacteria can get through. Clay particles and other mineral surfaces in an aquifer also can trap dissolved substances or at least slow them down so they don’t move as fast as water percolating through the aquifer.

So you might ask, if an aquifer lies at such a depth below the ground, how is it contaminated? An aquifer can be contaminated by many things we do near the surface of the earth. Contaminants reach the water table by any natural or manmade pathways, along which water can flow from the surface to the aquifer. Deliberate disposal of waste at point sources such as landfills, septic tanks, injection wells and storm drain wells can have an impact on the quality of ground water in an aquifer. That is why bore-wells near landfills are all contaminated and dangerous chemicals have leached into them.

In general, any activity which creates a pathway that speeds the rate at which water can move from the surface to the water table has an impact. Naturally, since it does not have the required time to be cleansed. Sometimes, waste water leaking down the casing of a poorly constructed well, bypasses the natural purification afforded by soil.

Excessive addition of fertilizer, agrochemicals, and road laying chemicals over broad areas, coupled with the enhanced recharge from watering of crops, golf courses and other irrigated land and along road ditches, are common reasons for contamination. Removal of soil in excavations and mining also reduces the purification potential, but it also enhances recharge; but in some cases the water table is exposed and becomes directly vulnerable to the entry of contaminants.

Therefore we must understand that any borewell accesses an acquifer, in which water has collected for decades. We need to replenish this water as it is finite and the best method found so far is RWH. Just digging a borewe- well and exploiting all the water is an uneducated move. Use all in your power to replenish the water table mainly with RWH and this can help maintain a good source of clean and fresh water, with the future in mind.⊕

Paragliding: discover the freedom of flying

Paragliding is the old dream of flying come true. Discover a destination not far from Bengaluru which lets you taste the gift and freedom of having wings.

May 1, 2018 Gauri Mullerpatten and Shravya Sharath

He is young and enthusiastic, and taking on Ramalinga Reddy from BTM Layout. Dr Syed Abbas from Aam Aadmi Party talks about his work and ambitions.

Reminder of a bygone era

The history of the majestic red building that houses the Karnataka High Court is as imposing as the building itself. Read on for a peek into the same.