On 8th May, BBMP issued a notice meant as a final warning to unlicensed health units to obtain trade licenses. But this was not the first time; BBMP had issued the notice thrice before – first on 5th December 2010, second in February 2011 and the third in June 2011.

Despite these notices, 937 health units out of a 2648 hospitals surveyed by BBMP were unregistered as of March 2012. 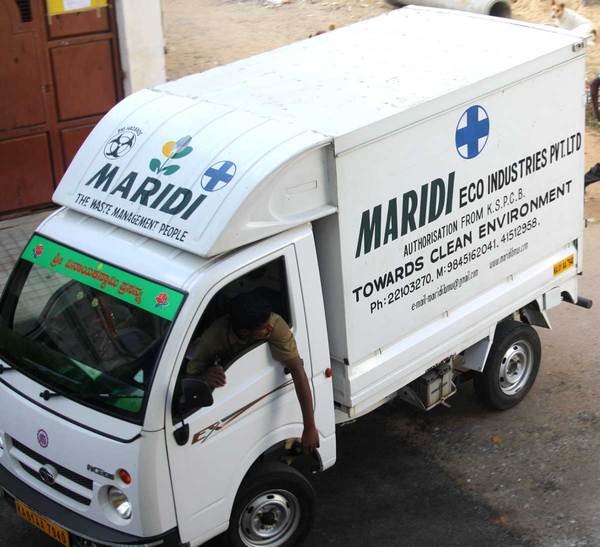 The notice makes it mandatory for health units to have an up-to-date receipt of tax payment, an authorisation letter from KSPCB (Karnataka State Pollution Control Board), an agreement with authorised bio-medical waste collectors –  Semb Ramky Environment Management Pvt Ltd or Maridi Eco Industries Private Limited. Along with this, they should pay one year’s fee as mentioned in Suvarna Arogya Paravanige-2007 to obtain trade license. Suvarna Arogya Paravanagi is an optional scheme for renewal of Trade License.

Dr T Devaki Umesh, BBMP’s health officer (West), says that it is mostly the day clinics that are not licensed. However, on Sunday, 10th June, BBMP held a meeting with doctors of day clinics to sort this issue. She adds, “70 people applied for the license and we will see some more soon.”

Who is supposed to collect biomedical waste?

According to the Bio-medical Waste (Management and Handling) Rules, 1998, the organisation/institution generating waste is responsible for ensuring that such waste is handled without any adverse effect to human health and the environment.

So either the health units generating bio-medical waste should have an incineration plant to disinfect or burn it, or tie up with any private agencies for the same. Most hospitals found the latter viable. In 2001, two private players Semb Ramky Environment Management Pvt Ltd and Maridi Eco Industries Private Limited got the tender to handle waste in Karnataka. These two got the contract out of the 14 that had applied.

Maridi has its incineration plant in Kanakapura road and Ramky has its plant in Tumkur Road. The two organisations collect biomedical waste in four color-coded bags, segregated by the concerned health unit.

KSPCB remains the monitoring authority of the private players.

Maridi caters to South and East Bengaluru along with Mandya, Kolar, Chickballapur and Ramanagara and handles roughly 1600 health units in Bangalore. M A Srinath, Vice President Operations, Maridi, claims that almost all bedded hospitals are covered in Bangalore either by his company or Ramky, but also mentions that day clinics remain a nuisance for them.

“The day clinics are present in every nook and corner of Bangalore and many are not registered. They generate lot of waste. Also, the timings of the day clinics are irregular, which makes it difficult for us to collect the waste regularly,” says Srinath.

Segregation is the issue

Even in big hospitals, segregation remains a problem.  Though this process is easy, Srinath sees segregation as a biggest challenge and criticises the hospitals, which don’t  segregate waste properly. He says, “Although we train them thoroughly, other waste is also mixed with biomedical waste. This in turn increases our work load.”

Some doctors feel that there is monopoly in the market.  Dr Y L Rajashekhar, Medical Director at Sekhar Netralaya is unhappy that there are only two players for bio-medical waste collection in Bangalore.

He says, “On one hand government makes rules, and on the other hand we do not have many options. Also, BBMP does not decide on the fees these players charge.” Rajashekhar thinks that BBMP should come up with its own scheme to collect bio-medical waste.

Dr Vishwas of Srinivasa Dental Care Centre says his dental clinic generates about 2-3 bags of waste a week but pays Rs 700 per month.  He adds that the charge should depend on the quantity of waste produced.

However, Srinath justifies the pricing saying collecting biomedical waste from clinics is cumbersome. The clinics do not operate at fixed times which increases the workload.  He adds that Rs 5 – Rs. 5.50 is charged per bed per day for all in-patient hospitals and disagrees about the monopoly. He says, since the amount charged is decided in consultation with KSPCB, it is not exorbitant.

How does it affect us?

Most visits to the hospital – for vaccinations, minor surgeries, major surgeries – all leave behind a trail of biomedical waste. If this is not scientifically disposed, it can cause serious trouble. For example, if you get a vaccination, the syringe, needle and even the cotton used becomes bio-medical waste.

Biomedical waste if mixed with municipal waste can be hazardous.

According to a report available on the website of ministry of urban development on bio-medical waste, rag pickers and those working with recycling are the worst affected while trying to ‘salvage items which they can sell for reuse’. The mixed waste can cause  diseases like cholera, plague, tuberculosis, hepatitis, AIDS (HIV), diphtheria etc, and poses grave public health risk.

The solution is scientific disposal. It ensures that large quantity of bio-medical waste is not mixed with municipal waste causing air, soil, and water pollution which has serious effects. It is the duty of the concerned health department to dispose this waste scientifically.

There are many aspects of the BBMP Restructuring Committee report that did not please everyone. Here are some of the bouquets and brickbats.

The Bengaluru plant has initiated the process of repairs and the shutting down of the furnaces will accelerate the process of revamp, expected to be completed by November end. The firm has said it will then apply afresh to the KSPCB for consent to operate.

Commuters and shop keepers are most worried, as the ongoing project does not seem to be seeing the light at the end of the tunnel.