Eczema in children, is a condition typically characterised by skin lesions associated with itching, sometimes watery discharges,  often complicated by infections, and noted for relapses.

The condition has shown a spurt in number of cases recently. In 1972, a  Bihar study revealed prevalence of eczema to be 0.38% of all skin diseases.  38 % of them were reported to be Infantile AD (atopic Dermatitis), a medical term for eczema. 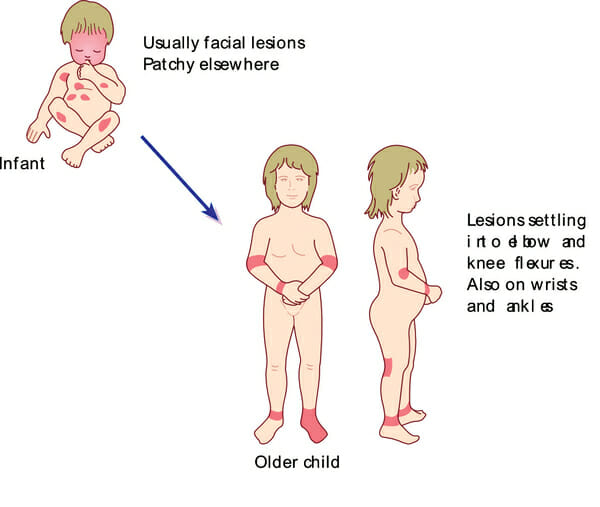 Two decades later another study showed the incidence of AD to be 28.46% of total paediatric skin diseases. The reasons for this spurt are not very clear. Some of the causes being studied, are changes in environmental pollutants, breastfeeding patterns, increased awareness, urbanisation, better and more scientific reporting, and better diagnostic modalities.

It is also known to be  more prevalent in winters than summers. Male children are more likely to be affected than females, and Family history is known to play a part. The onset of disease is mainly between 3-5 months of age, and is likely to affect mainly face, elbows, knees and diaper rash in babies. In older children, areas affected include the fold behind the knees, inside the elbow and neck.

It is noted that apart from the babies, the disease causes a great amount of anxiety and sufferings for parents as well. Some of the facts that can help alleviate this anxiety are:

o   Use of soft natural fabrics are a good preventive measure,

o   Use of moisturisers

o   Using warm and not hot water for bath

o   There are certain items of diet which may be suspected to cause allergy. However, diet restriction merely on suspicion may lead to nutritional imbalances, and should only be resorted to, on doctor’s advice.

o   A Humidifier may be needed in winters when heating dries up atmosphere. Also needed in summers, if Air conditioning is used because it depletes the moisture content of air.

It goes without saying that meticulous attention to skin hygiene of babies can go a long way in preventing and alleviating the suffering of baby as well as that of parents.

About Mukul Saxena 34 Articles
Col (Retd) Dr Mukul Saxena has over 30 years of cross-functional expertise in healthcare, both in public and private sectors.

A view contrary to the prevalent one brings with it an alternative perspective. Krishna Rao Jaisim provides just that, about urban design.

Segregation at source is the key

The common grouse on people’s lips today is – look at those stinking mounds of garbage. What is the BBMP doing about clearing them? But have we stepped back and understood that the garbage on the road is ours and we need to learn to segregate it?

What category do the freelancers and the women who work part time fall into? Is there really a need to classify stay-at-home and working mothers? What does it achieve finally? Isn’t the work at home the ‘real’ work?