How can I find my name in electoral roll?
Here is the final voter roll published in the website of Chief Electoral Officer (CEO), Karnataka: http://164.100.80.163/Teachers_Grd/a1.html

Where are the voting booths?
The names of all voters and their respective voting booths are available at http://ashwinmahesh.in/mlcvote.htm. (Lok Satta compiled this list with data from CEO office.) In another tool http://mlc2012.herokuapp.com/, on entering your name, you can get the address and map to your booth. 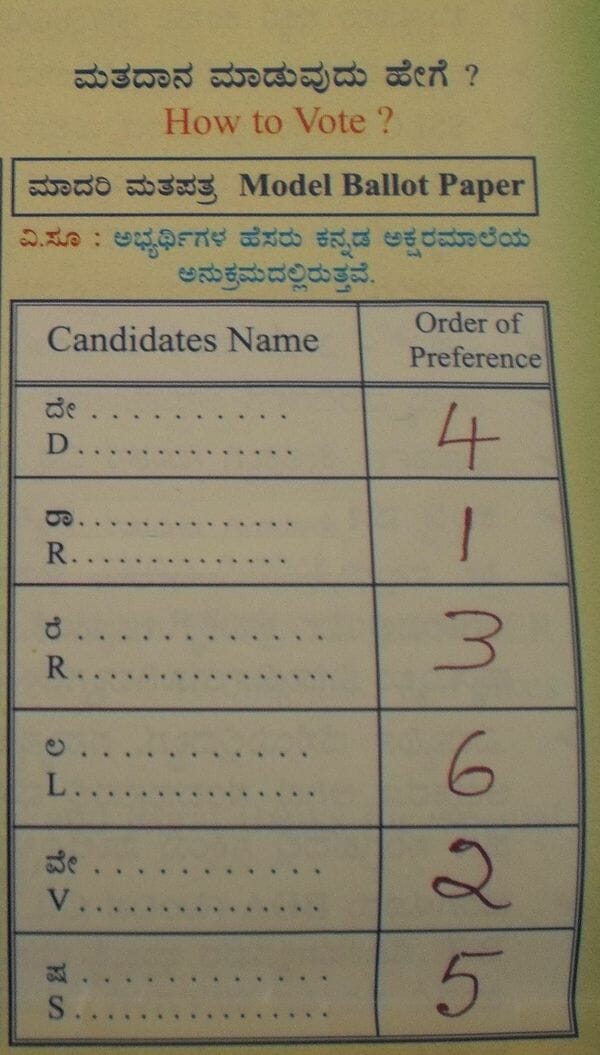 You need to carry any government recognised ID card while going to vote – it is not mandatory to carry the voter ID card.

When one candidate is removed, all the first preference votes he got, is transferred to the candidate who was ranked second by voters in those ballot papers. Candidates are eliminated this way until one winner emerges. It is not mandatory for voters to rank all candidates. If you want to give your vote to one candidate alone, you can rank him/her as ‘1′, and not rank anyone else. In that case, if your candidate is not elected, your vote will not go to any other candidate.

Voting is on Sunday, June 10th, between 8 am and 4 pm. The counting starts on June 13th and will be completed by 15th.

About Navya P K 286 Articles
Navya has 12 years of experience in journalism, covering development, urban governance and environment. She was earlier Senior Journalist, Citizen Matters, and Reporter, The New Indian Express. She has also freelanced for publications such as The News Minute, Factor Daily and India Together. Navya won the All India Environment Journalism Award, 2013, for her investigative series on the environmental violations of an upcoming SEZ in Bengaluru, published in Citizen Matters. She also won the PII-UNICEF fellowship in 2016 to report on child rights in Kerala and Tamil Nadu. Navya has an MA in Political Studies from Jawaharlal Nehru University, and a PG Diploma from the Asian College of Journalism.

For a safe and happy Diwali

Firecrackers are a part and parcel of Diwali. But if not used properly, they can cause injuries. Here’s what you need to keep in mind while handling fireworks.

A whiff of Moggina Jade, and a splatter of Dabangg

Whether it’s action-packed Dabaang or straight-from-the-heart Moggina Jade, this week at the cinema halls has seen a rather interesting mix. Read on to know which movie is paisa vasool.

Bikes riding on pavements should be banned!