There was a citizen’s piece recently on Citizen Matters that talked about what BBMP should look at in the upcoming council budget. I would like to suggest adding bins. In fact, how about a vigorous, mass, ‘Bengaluru-centred ‘bin beku’ movement , along the lines of Team
Hazare’s mobilisation  last year ? 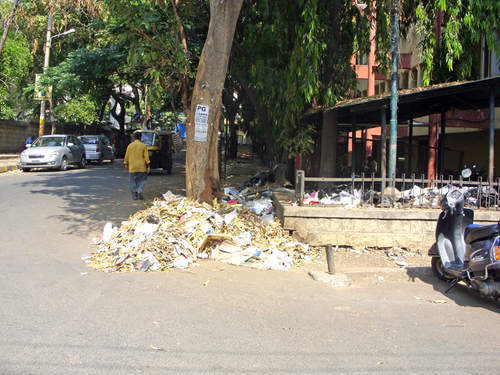 We need garbage bins. Urgently. I don’t know whose idea it was, to do away with roadside garbage bins, in the name of  “door-to-door collection” but  the city has now become one huge, continuous pile of rubbish, from one end of each road to the next.

Just take go around town, and start counting (or better still, taking pictures). Unholy messes, with heaps of plastic debris, rotting  solid waste, filth, dogs and rag pickers rummaging through smelly mounds (and worse still) garbage removal truck staff shovelling the mess into their vehicles, using bare hands and often managing to make a bigger mess after they are through.

Door-to-door? What does a passing pedestrian  do, on the street, when he or she wants to throw a wrapper or an empty carton or a banana peel? Toss it by the wayside, because there are no bins, and one doesn’t stand  waiting for the ‘door-to-door’ collection van to turn up the next morning. This is senseless. In no city, anywhere in the world, has the rubbish bin been done away with, in the name of ‘beautification”.

People, even those who are averse to throwing litter indiscriminately, are  now forced to toss their bags of garbage by the roadside, to be picked up next morning by the staff engaged to clear rubbish.  By then, the 5.5 lakh stray dogs  that roam around the city  (the proliferation of strays  is another issue, though BBMP has in theory a dog catching and related department).

Every tree base and lamppost, has become a place for dumping trash. The mess that fouls up our environs now is visually and olfactory, offensive and revolting, and a  major health hazard.

Three years ago every single family on my road had at least one case of chikungunya caused by  infection traced to roadside garbage dumps.  I , as a victim myself, wrote a petition, collected signatures and sent it by registered mail to the BBMP commissioner. There was not even an acknowledgement. The public would have sued, in any other country.

We do not  even need to import the heavy metal bins that you see overseas, In a city boasting to be an IT capital,  can’t someone design an indigenous trash bin, perhaps even one that will (given today’s electronic sophistication) beep a loud message to passers by, to “put it in the bin” (in Kannada of course — thottiyalli haaki) How about it, lads?

For a fraction of the hundreds of crores that we hear about , going down the drain  (or more specifically, into private pockets)  in scams pertaining to  the BBMP each day , it  should be possible to spruce up the city. You don’t need flood lighting or son-et-lumiere  shows to make a city attractive. Just addressing the garbage issue, will be a big step.

But of course, the crux is lack of political will — and corruption. In the month gone by, we had media reports about three former ministers who arrived “ not in official cars but  in private cars, for meetings — much to the surprise of all”  (to quote press reports of May 14).

Why are we surprised that ministers who had resigned (and were therefore no longer entitled to  official vehicles)  arrived in private cars? You see what I mean? Corruption is no longer news, absence of corruption is, that’s how low we have sunk.

A report of May 8 says 4,000 files lie unattended, with another 400 “missing”. No hue and cry, no pinning responsibility, let alone penalising —  chalta hai. Nothing new, right? We have stopped expecting any better. And we move on…

A suspension bridge at KR Puram that cost Rs 200 crores and conferred a national award, no less,  for “Best Bridge” by the  Indian Institute of Bridge Engineers, is now conceded to be a “harebrained” project, causing  traffic jams. No one gets pulled up, or punished, for the mess.

Two state officials  — Mahantesh and Madan Naik — lost their lives investigating  and exposing corruption during May. And  all that the city administration can think of, is  putting up statues along the road medians, to mark the Global Investors Meet ! Bins, Gowdaji, not statues, are likely to bring in more money.

Ranga Shankara announces its first internship programme during its upcoming Theatre Festival 2008. Applications are invited from interested candidates before 24 September 2008.

The long saga for commuters across the Whitefield railway line in Kadugodi may yet end, with safety approval granted just this week. A top site engineer asks citizens to wait for another 2½ months for the bridge to be opened.