Starting the grade separator works at Koramangala for the contested Sirsi-Agara signal free corridor has landed BDA in trouble. The High Court on May 29th ordered that emergent notices be sent to BDA and its Commissioner Bharat Lal Meena. Emergent notices are issued only in serious conditions and have to be responded to immediately.

Justice Shylendra Kumar and Justice B Srinivasa Gowda passed this order on a contempt case filed by Bengaluru-based civic organisation CAF (Citizen’s Action Forum) and Kuvempu Nagar RWA. These petitioners said that BDA started electrical works for the project, by violating the court’s previous orders. They had filed an initial PIL saying that the corridor project itself should be reconsidered. 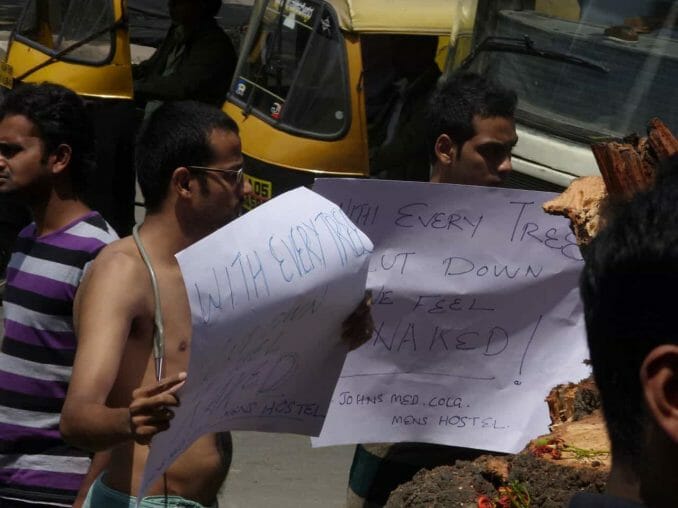 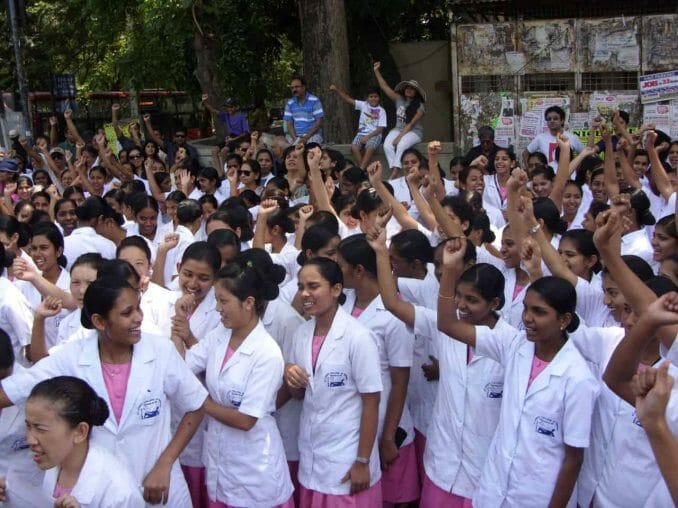 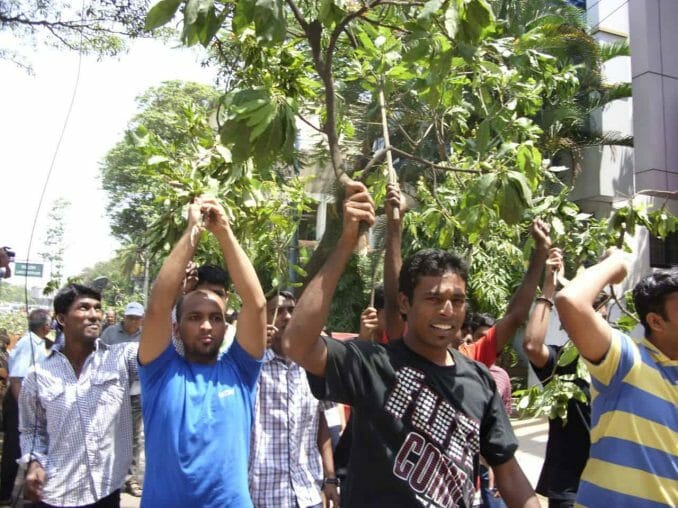 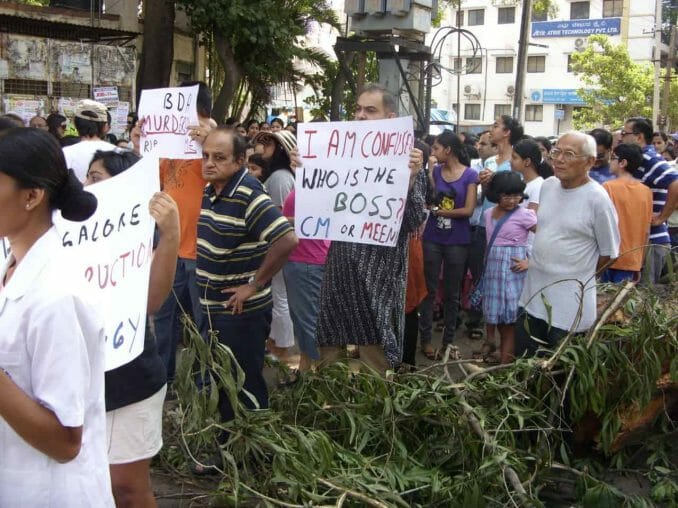 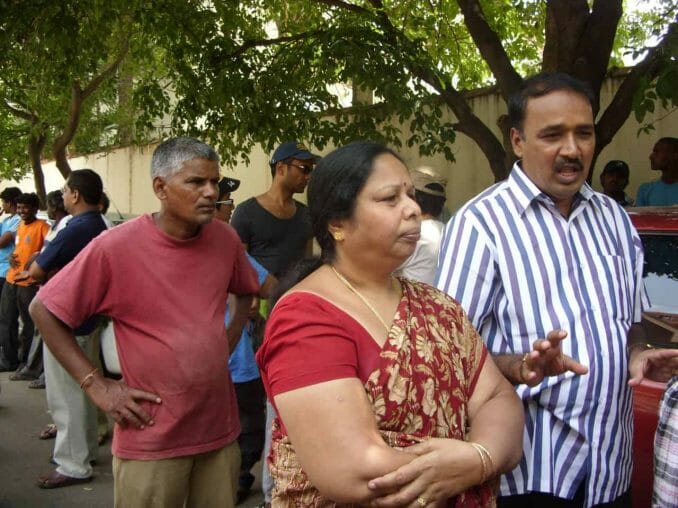 B N Kokola and her husband Radhakrishnan outside their residence, addressing the protestors. Pic: Anisha Nair 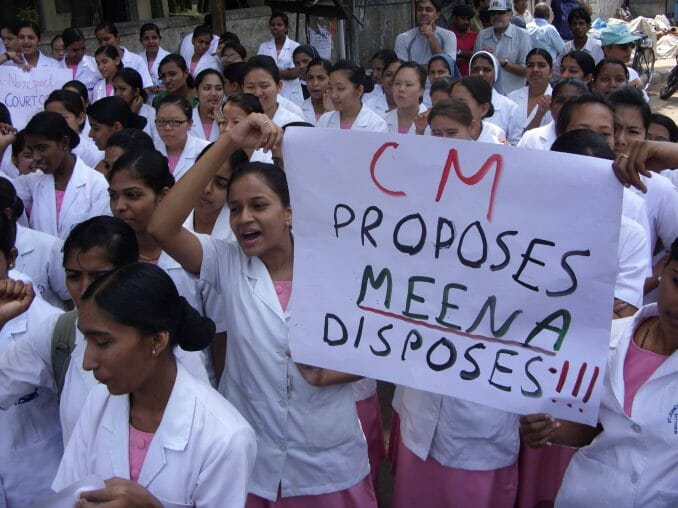 In March, the court had passed an interim order saying that BDA can start only those specific works for which it had already issued Work Orders (WOs). BDA started works soon after. But though BDA had not issued WO for electrical works at the time of court order, it awarded this WO later and started electrical works.

Petitioners then filed another case citing contempt of court. "In recent times, this is probably the first case of court sending emergent notice to BDA on a case like this," says Nitin Seshadri, one of the petitioners of the original PIL.

Last week, BDA had also cut trees at St John’s Hospital junction, prompting protests from citizens. ‘Nyaya beku‘ was the slogan in the air on May 27th, Sunday morning, when residents of Koramangala came out and protested against the project. The Koramangala RWA called for the protests and around 200-250 people participated.

BDA’s signal-free corridor project through Koramangala will be built at a cost of Rs 119 crores.

As noted earlier, the residents had already filed a case against the project on grounds of contradictory traffic studies. The HC had assured them that no work will be carried out until the next hearing took place. That hearing was scheduled on May 29th.

The BDA also ignored Chief Minister Sadananda Gowda’s promise to hold the work till a committee reported on the project’s sustainability. Gowda had promised the residents to set up a committee during the foundation stone laying ceremony on April 30th. At that time, BDA had agreed that no work will be carried out till the time the committee formed by CM submits its report.

BDA chopped off 32 trees between 2am to 6am on Saturday. The residents opposing the project were very upset with BDA’s move. Dr Radha Krishna, a resident of Koramangala says, "The High Court told us that no work will be carried out until the next hearing. But the BDA comes overnight and chops off around 40 trees. Who runs the state? CM or BDA?"

BDA’s act has caught even Rajya Sabha MP Rajeev Chandrasekhar, who has been opposing the project right from the start, by surprise. V Anand, Principal of Public Affairs from Chandrasekhar’s office, says, "We were aware that BDA will resort to such mid-night operation or any action that is in the contempt of the High Court and resort (to) destruction of trees. (This) when BDA had agreed to stop work in view of Jairaj Committee being instituted by the Chief Minister to study and submit a report to the Government in two weeks."

The protest saw students and doctors from St. John’s Hospital participate in large numbers. They say the project will affect the easy access to the hospital. They are also worried about the land acquisition plans of BDA for the project.

As part of the protest on May 27th, residents marched to local Corporator B N Kokila’s house. She and her husband claimed that they were not aware of any such situation. Radhakrishnan, Kokila’s husband said, "We get only Prajavani newspaper in our house. Nothing has come in that paper as such. So we are not aware of it."

Seshadri says, "An FIR has been filed against the protesters two hours after the protest. The police filed it as a suo moto case and claim that it took place without the permission of the police." The protesters believe that FIR was filed due to the pressure by the BDA.

On 14 June, 2012, the residents of Koramangala filed an FIR against the construction company for starting work on the signal free Agara – Sirsi circle corridor. The residents were earlier assured that the work will not start until the BDA Commissioner inspects the site.

Residents say the new BDA commissioner, Pradeep Singh Kharola did visit the site after the FIR and asked for some minor modifications in the project. Koramangala resident, Muralidhar Rao says “RWAs are not happy about the commissioner’s point and we are relying over the CM appointed committee which is looking into the matter."

The residents had also filed a PIL against the entire project earlier.

According to media reports, the BDA commissioner has promised to relook at the entire project from Sirsi circle to Agara. He said that the project will be tweaked a bit including reconsidering the land acquisitions from various places like Lalbagh and St Johns Hospital.

After the High Court, now it is now a government committee that is saying residents were right all along. It has recommended that Hosur road be redesigned to reduce the traffic burden on residential areas.

Qualifications to be a town planner

Here are the requisite educational qualifications and work exprience, prescribed by the state govenrment, for appointments to the town planning department.

This spot in Jayanagar 9th block 22nd Main, opp Turning point is used as a garbage dump. It is health hazard for residents. ⊕