When an apartment is built and it is eventually occupied, a few questions do the rounds within the new community. There are always common issues to be coordinated with the builder regarding teething troubles, maintenance, handover and several such issues.

Normally, a group of owners comes together to coordinate on behalf of the community. For a period, I was one of them in our large apartment located near Marathahalli in Bengaluru. Among the various challenges we faced, one of the toughest questions to answer was on registering the owner’s association.

Today, if a community is lucky, the builder registers the association. If that does not happen, the owners get together and do something about it themselves with the help of a lawyer. We spent years on this problem. Most lawyers in Bengaluru we approached recommend the registration of the owners association under the Karnataka Societies Act.

We determined that the Karnataka Apartment Ownership Act is the correct law. In fact, our agreement for sale with builder and registered sale deed contained copious references to the Apartment Ownership Act. However, the registration process seemed so complex and convoluted that it seemed like a very daunting task.

As part of this process, I did a lot of research and reading and received inputs from several people who had looked into this issue themselves. What I learnt surprised and shocked me and those are briefly summarised in the rest of this article.

As stated earlier, the societies act is the wrong law for registering an association. Take the case of this apartment complex on Sarjapur road which is now in the midst of a legal battle with the builder.

The builder had the apartment association registered under the societies act. Subsequently, the residents discovered that the builder was carving out 20,000 sq. ft. from the original bounds of their property for a commercial venture. The matter is now in court where the builder now contended that the owner’s association was not qualified to fight the case since it was formed under the societies act and not the Karnataka Apartment Ownership Act (KAOA) as required.

It turns out that if the correct process as required by the law is followed, KAOA registration will flow smoothly. An apartment as defined in Karnataka is a property of a residential nature where the owner owns the apartment and holds a percentage share in the land and common areas and amenities. There are two laws that govern this process in Karnataka.

One is the Karnataka Ownership Flats Act (KOFA) and the other is the KAOA. KOFA regulates the process of promotion, construction, sale, management and transfer of the apartment. KAOA was written with the view to make apartments heritable, transferable and mortgageable and to address aspects related to management of the property. 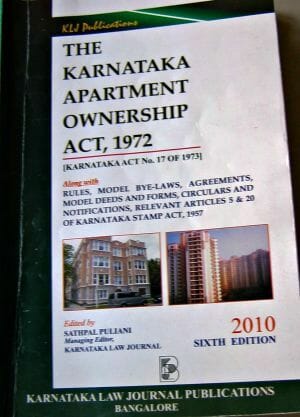 In Karnataka, there are three types of apartment communities that can be formed. A promoter can float a company or cooperative society under KOFA. These are two options. Alternatively, the third option envisaged in KOFA is for the builder/promoter to form an association of owners under the KAOA. Forming a company is a pretty rare approach. In a cooperative society setup, the building, common area and land is vested with the cooperative society and the allottees of the flat are deemed as “tenants”.

Please note that the word tenant in this context has a more expansive legal meaning as compared to regular usage. The member has all rights to occupy his or her flat, but does not own an undivided share as is commonly understood since all common property is vested with the society. Naturally, this raises issues when securing a mortgage for an individual unit – how does a bank give mortgage for something you do not strictly own?

So the only solution is for all members to take loan from the same bank in which case the risk for the lender goes up substantially. It is to remedy this situation that the KAOA was passed. (Actually, Karnataka adapted Maharashtra’s laws. Maharashtra has been a pioneer of apartment laws in India).

In India, the sale and purchase of immovable property is governed by the Transfer of Property act of 1882. The 1882 act does not cover the concept of an apartment along with its undivided share in land and common areas. So a fundamental step that KAOA does is that it equates the purchase of an apartment with its proportional undivided share as equivalent to an immovable property bought under the transfer of property act.

The purchaser is the absolute owner with a clear title to the apartment and its proportional undivided share.

How is the clear title ensured?

The KAOA requires the builder/promoter/owner of the apartment to execute a document known as the Deed of Declaration. The Deed of Declaration (DoD) is a document that describes the property, i.e., the building, all of its apartments, the common facilities such as lifts, generators, fire fighting equipment, pool, gym etc., along with the ownership scheme giving the percentage share of each apartment. Along with the DoD, copies of plan approvals from local authorities and bye-laws of the association of owners is to be registered.

Now, when individual apartment owners go to register their Deed of Apartment to complete their sale, the KAOA requires that the Deed of Apartment refers to the DoD (along with information regarding registration of the DoD, such as registration number, date, sub registrar’s office etc.) so that the ownership scheme is fully traceable and the title clear.

There are also special requirements on the Registrars and Sub-Registrars to maintain this information in an organised fashion. In addition to the Deed of Apartment, the purchasers also execute a Declaration known as Form–B where they agree to abide by the rules of the KAOA.

Once the apartments are sold and registered, the builder is to approach the Registrar of Cooperative Societies (identified as the competent authority by KAOA) with copies of the Registered DoD, bye-laws, Deeds of Apartment, and Form-B declarations to register the association.

The KAOA also has additional provisions regarding duties of office bearers, process of voting, regarding charges and encumbrances against individual apartments, and even on steps to be taken in the event of destruction of the property – say by fire or earthquake.

For the local governments such as BBMP, there are additional hidden gems. The KAOA says that each apartment owner is liable to pay local taxes for his or her apartment and proportional undivided share. So that resolves the question of who pays property tax on the common areas. That is not to say the KAOA is perfect. It is a 40 year old law to which many improvements can be made. However, the key point is that a very logical framework already exists.

Unfortunately, the ground reality today is that very few builders do things the right way. Most apartments have associations registered under the societies act. Banks continue to give mortgages despite the fact that clear title is not passed on to the buyers due to the manner in which transactions are conducted. The registrars and sub-registrars continue to register any document that purports to be an apartment sale deed without paying heed to the requirements placed on them by the KAOA.

The government, as per their answers in the Karnataka information commission to an RTI request filed by a well known RTI activist C N Kumar was not even sure which department is responsible for a law such as the KOFA (and by extension, the KAOA). A copy of the RTI response is with Citizen Matters.

It turns out the Urban Development Department is. Could we hope that the state will begin to ensure adherence to the law, educate its citizens as well as builders and maybe even amend these acts soon to make them modern and more functional? Can buyers get together and force the builders to do things in the right way?

Elder abuse: What can you do about it?

This June 15th, unite to stop the abuse of senior citizens. Here’s a guide on how you can recognise elder abuse, and extend help.

Buy a plant and support a cause! The Association of People with Disability annual plant sale, inaugurated by Margaret Alva, is on till Jul 29th.