Is there a tannery on Tannery Road? Or where’s the church on Church Street? There’s usually more to a name. And in Bangalore, it’s usually something that fails to meet the eye. Or has turned into a blind spot. 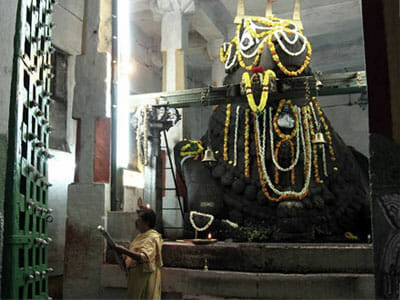 The Big Bull at Basavangudi.

The temple was Built to appease an angry bull that used to damage the groundnut crops grown in this region.

A quiet corner in the temple on BULL TEMPLE ROAD, Basavanagudi.

This is the starting point of The Bangalore Karaga procession – Entrance to the temple on DHARMARAJA TEMPLE STREET.

Not far from the mad traffic.

Completed in 1852, the Holy Trinity Church, popular for its Tamil language mass, lends its name to TRINITY CIRCLE.

The intricate decorations of the Hudson Memorial Church.

Mahatma Gandhi with his grand-nieces…

Like all cities in India, MAHATMA GANDHI ROAD (M G Road) is the most popular street in Bangalore. Here, the Mahatma takes a walk in the Mahatma Gandhi Park.

Cooling off under a Margosa Tree.

The Garden City has a few streets named after the flora of the place. Like SAMPIGE ROAD and MARGOSA ROAD. The trees that give Malleshwaram a 2 degree dip in the temperature.

Reflection of the stadium in the Sampangi Tank.

All that remains of the Sampangi Tank is this pond. It lends its name to SAMPANGIRAMNAGAR.

As red as blood.

Not for the faint hearted. The slaughter house on TANNERY ROAD. And yes, one of the byproducts is the raw material for the leather industry.

Soon to be banished to the outskirts of the city. The stables and race course on the RACECOURSE ROAD.

The Sigapu Koil or Red Spire of the St John’s Church that lends its name to ST. JOHN’S CHURCH ROAD. It was built in 1858. It was initially called the New Mootoocherry Church of the Anglican order.

Waiting for children to run out after the Sunday service…

Notes on the landmarks seen above.

St. Marks Cathedral is the oldest Anglican Church (Church of England) in Bangalore, now under the Governing Body of the Church of South India (CSI). Situated on the busy MG Road, it was consecrated by the Bishop of Calcutta in 1816. Its architecture is inspired, to quite an extent, by the 17th century St Paul’s Cathedral. St. Marks Cathedral is built in the colonial style of architecture- it stands adorned with a semicircular chancel, having a huge, magnificent dome. The exquisite woodwork, the intricate carvings and the stained glasswork of the cathedral add to its beauty. (Reference)

It was called ‘South Parade’ in British times and renamed post independence. It is one of the busiest roads in the city and is lined on one side with commercial shops and buildings, and with the famous parade grounds on the other. MG Road was until recently famous for the city’s landmark enterprises like India Coffee House, Plaza theatre and the Lake View ice cream parlour. It runs from Trinity Circle at one end to Anil Kumble Circle. Presently it is being improved and prepared for the long-awaited Metro Rail line that connects the eastern part of Bangalore to the west. (Reference)

Another of the city’s landmark roads, it is so called because of the Race Course that runs across one side of the road. On the other, it has popular hotels like the Chalukya and West End, the famous educational institute Bharatiya Vidya Bhavan and the Karnataka Electricity Board. The road is now being widened, and recently saw the felling of its glorious foliage.

Basavanagudi in South Bangalore is one of the oldest residential and commercial locality of the city, bordering Jayanagar on the south. The name ‘Basavanagudi’ refers to the Bull Temple that is located here, which is famous for its monolith statue of the Nandi Bull (Basava). Basavanagudi brings to mind the Bangalore of yore, with wide tree lined avenues dotted with bungalows. This area too has fallen under the commercialisation beast, with the trees being cut down for road widening and with high rise structures and apartments coming up. (Reference)

Hudson Memorial Church is one of the major landmarks of the city. It lies at Hudson circle near Bangalore City Corporation. The church was built in 1904, in memory of Rev Josiah Hudson. This impressive structure with a tower and several stained glass windows is an example for the neo-gothic style of architecture. (Reference)

This beautiful landmark at the east end of the MG Road was built in 1848-51, to cater to the needs of the British Regiment stationed in Bangalore. It is built in the English Renaissance style. The beauty of Holy Trinity Church is not only in its tall towers and unparalleled pillars but also in its statues of generals and other officials, mural tablets and memorials. The church can accommodate 700 people and is regarded as the largest ‘military’ church in Southern India. (Reference1, Reference2)

Sampige Road and Margosa road are the two main roads running through Malleswaram, one of the oldest areas of Bangalore. They derive their names from the flowery Sampige (Champak) and Margosa trees that once lined these roads; in actuality they are the 2nd and 3rd main roads of Malleswaram respectively. The busy roads are flanked by commercial establishments on either side, and end in the famous Indian Institute of Science.

The Tannery Road slaughter house near Shivajinagar has recently been in the news, as a PIL petition seeking shifting of the existing one to the new abattoir complex planned at Iblur, on the outskirts of the city was passed by Justices Cyriac Joseph and Ashok B. The slaughterhouse has an installed capacity to slaughter 200 small animals and 50 large animals. Reports, however, say that up to 500 small animals and 150 large animals are slaughtered everyday, with the numbers going up to 2000 small animals on festivals like Eid. The waste is dumped in an adjacent stream, spreading pollution and stench in the neighbourhood. (Reference)

The Dharmaraja Temple in Bangalore is located in Nagarath Pet. It has two outstanding images, one of Dharmaraja Swami, one of the main characters in the epic Mahabharata, and the other of Lord Krishna. The temple is known for its annual Karaga festival. The Karaga is a representation of Draupadi, wife of the Pandavas and a symbol of Shakti. Celebrated in the month of March or April, the procession of the festival covers a distance of 20-25 kms, starting at 02:00 hrs and ending at 06:00 hrs, and fascinatingly, stopping at the dargha of the sufi saint Hazarat Tawakkal Mastan. It’s a wonderful example of the brotherhood of Hindus and Muslims. (Reference)

It was one of the oldest water bodies of the city. Bangalore once boasted a water body population of over 400 lakes which were the only source of drinking water for the city habitants.The great Kempe Gowda began his township by erecting lakes like the Ulsoor, Dharmambudhi (presently Magestic bus stand), Kempambudhi, Sampangi (where Kanterava Stadium stands now), Siddikatte (near City Market) and also a tank inside the Old Fort (now in ruins). The number has now dwindled to just 64. Experts opine that with rampant encroachment, they too shall vanish from the map of the city. (Reference)⊕

About Gopal M S 6 Articles
Gopal MS is a photoblogger who documents Mumbai and its suburbs at Mumbaipaused.com

This week’s scan of Kannada newspapers have a number of reports from students selling their MD seats for money to wives canvassing for their husbands for the election and so on.