Members of Federation of Residents Welfare Association of Ward 148 (Ejipura) known as FORWARD 68 brought civic officials for a one-on-one session in its quarterly review meeting on 19th May. 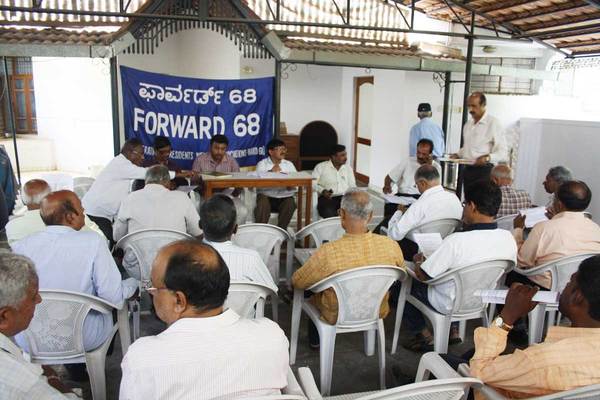 Anil Kumar , Secretary , FORWARD 68 drove the meeting and allowed concerned residents in turns to inquire about their problems with the respective officials. All the pending issues as well as fresh issues were discussed.

The meeting started with the residents complaining about BESCOM officials not generating a docket numbers i.e registering their complaint. S R Nagaraj, AEE(S-4), Koramangala assured a quick response. Problems regarding sagging of wires and voltage fluctuations in these areas were also discussed.

Nagaraj spoke to the Citizen Matters about the importance of these meetings. He said that the turnout is very low in public forums organised by BESCOM. He promised that the minor problems will be settled in two to three days and majors would take at least 15 days to get resolved.

Other officials too promised of a quick action regarding the issues discussed.

Some of the major discussions included pourakarmikas demanding money for cleaning the streets and collections of garbage at Chandra Reddy and Venugopalswamy Layout, duplicate house numbers creating problem in the delivery of important letters such as visas and passports,water leakage near wipro park junction.⊕

Selecting an international school in Bengaluru may get easier soon. An education startup has launched a survey covering 25 schools with the IGCSE or IB boards. The report will be out in June.

A resident of Kanakapura Road narrates her experience of running around to find the right BBMP office to submit the hardcopy after registering on the voter rolls online.

In 2014, High Court directed the govt to allot them flats in Sulikunte, and to set up schools, hospitals and increase frequency of buses from the village. None of this has happened.