One traffic laden evening, I was going by bus from Sultanpalya to R.T. Nagar. I told the approaching conductor that I had a pass. He insisted on seeing it- and rightly so. But my lapse spawned a few harrowing minutes! 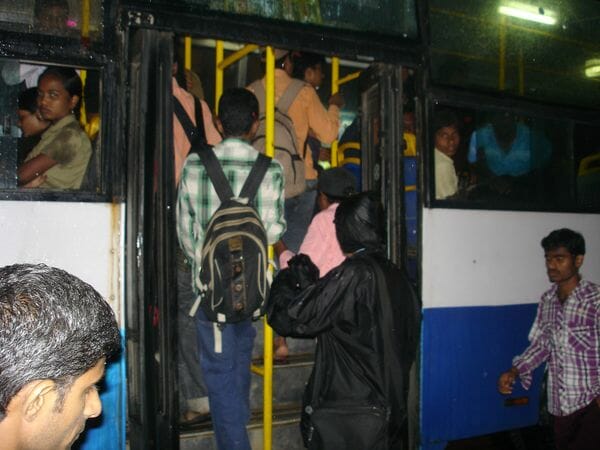 The conductor stared at my dilapidated year-old pass for a long time before showing it to the driver. Both exchanged sniggers and continued staring. Wild thoughts floated in my head. “Has my pass expired? Will I be kicked off? Will they arrest me?” While I was going crazy with worry, the conductor returned my pass- mocking me for the unrecognisable photo before the entire bus.

I’ll grant the man was bored and correct in his vigilance. A few minutes later he attacked another passenger. But I felt unnecessarily humiliated and I could feel him enjoying it!

Sometime back, a woman was almost kicked off a bus. Her crime? Not having change.  On failing to produce Rs 2, the conductor had the driver stop the bus and refused to let it move till she got off. It was eight pm and the woman pleaded not to be left in an unfamiliar and unsafe place. It was only after some passers-by noticed her plight and gave her the change that the bus finally left.

While such behaviour is uncalled for, passengers are not entirely innocent. The conductor was probably frustrated at yet another person- after a hundred others- handing over a large denomination note and requesting for change. After all, they do deal with plenty of travelers and it is impossible to give them all change.

Most people are pleasant to travel with- including the personnel- but there are a few wolves present. “We are a rude bunch at the end of the day.” explains Aishwarya Kirit, 18, a college student and a regular commuter. “We’re tired and frustrated,” she says.

Scenes at bus-stands like Shivajinagar are evidence: people rushing for the doors even before the bus stops, pushing and pulling at each other to get in first and grab seats. Even pushing people out of them!

One thing that really irks commuters is loud cell-phone conversations. Another is music played on cell phones. “People playing music are the worst! One person plays Tamil and the other plays Kannada!” says George Rodricks, General Manager of an automobile company who commutes between RT Nagar and JC Road. This is why the BMTC has now issued a notice allowing conductors to evict passengers disturbing the peace.

Then there’s the seating arrangement in buses. More often than not the men occupy seats in the ladies section! “They take pleasure sitting in the ladies’ place. They are happy to be there.” rues Sr. Doris who commutes to her work in a hospital every day . Funnily enough, ‘gentlemen’ do mind when a lady takes a seat on their side of the bus.

On the bizarre side, some commuters come in drunk. “I had this alcoholic waiting for a drink and at every signal or stop he would complain loudly about how pathetic Bangalore is!” says Aishwarya. It’s more disgusting when gentlemen put their hands on the wrong place- especially in a crowded bus. 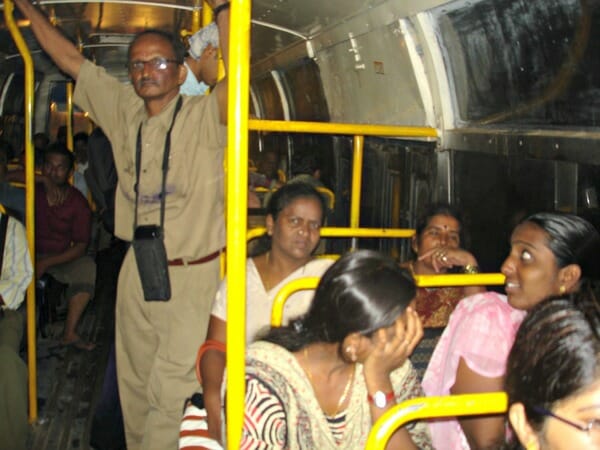 Conductors Rule the Roost inside the bus. Pic: Salonie Rego

What’s the solution then? Obviously strict penalties. But before that people should be aware of the rules. “Instructions should be placed all over.” says Rodricks. “People might not even know that they are inconveniencing others.”

Having more buses- and less crowding of present ones is also a good idea.

The best solution though? Passengers should stand up for themselves, instead of letting nuisances go unchecked. When it is absolutely clear that misbehaviour will not be tolerated, it is sure to stop.

Manners in Motion – A few pointers for commuters.

Other than that, have a good trip.⊕

Milan Luthria plays to the gallery, but makes his questions relevant to his audience. Vidya is bold, provocative and even outrageous, but she is never vulgar.

Let there be (LED) light!

What makes LED lights special and effective power-savers? Why are they preferred over sodium bulbs or CFL bulbs? Read on.

How do we remind people (of) their civic responsibilities?

A retired academic finds some children than their parents. She wonders if we can change adult attitudes for the better.