During the months of April and May, a lot of birds are observed to be nesting in various parts of the Bengaluru. In places like Lalbagh and Cubbon Park, which has a lot greenery and a fair amount of wooded area, birds can be found, and if we’re patient enough, a few rarer sightings are a possibility.

Here are a few birds that are nesting in our city.

Amongst those birds we often see flying across trees or across streets, either in groups or in pairs is the Rose-ringed Parakeet. These parakeets are found in many pockets of the city, and are one of those birds which have adapted to live in a city amongst bustling cars and motor vehicles. They mainly feed on fruits, buds, insects and buds, and are found in urban areas and in cultivated areas. 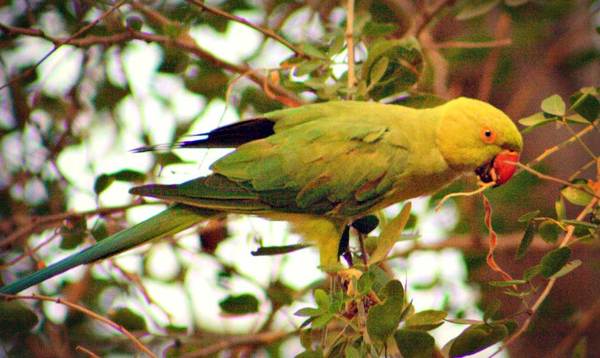 At this time of the year, prior to the monsoons, yellow-billed babblers begin to breed as well. Though they breed all through the year, their peak breeding season is around now. These babblers are often spotted in groups of seven or more and their presence is felt due to their noisy chattering and obvious movements.

Like the Parakeets, they too feed on fruits and insects. They are found more in scrubs and garden land, and in lower branches of plants and on the ground. If one takes a walk in Lalbagh or Cubbon Park, one surely cannot miss them.

The common-mynahs, though very often seen, make a very interesting species. Like parakeets, mynahs too have adapted well to the urban environments and therefore are found across the city, and in large numbers at that. The yellow patch behind the eye is a distinct identification mark of the bird. Also, the birds have legs and beaks that are yellow, while the rest of their body is mainly a dark brown.

What makes them interesting is that they breed almost throughout the year and that they have pairs for life. They are found nesting in the holes of trees and walls, and sometimes use the nests of woodpeckers and parakeets to lay their eggs in.

One of the calls often heard on the streets of Bangalore is the white-cheeked barbets’ "Kutroo…kutrooo". These calls get louder and louder as the nesting season comes nearer which is around now. These green birds usually begin breeding around December, and go on till the month of May. They usually nest in holes in trees of trees that are dead, but situated well above the ground. After about a month and a week after the chicks have hatched, the adults leave the nest and the chicks are left to fend for themselves.

"Last year, there was a barbet chick that fell from a very big tree near our house out of its nest," says 6-year-old Neel Shashank who lives in Jayanagar. "We took it to the vet near Kanakapura road," he said. Incidents like this occur once in a while and baby birds and squirrels fall of their nests from trees or buildings on to the road. 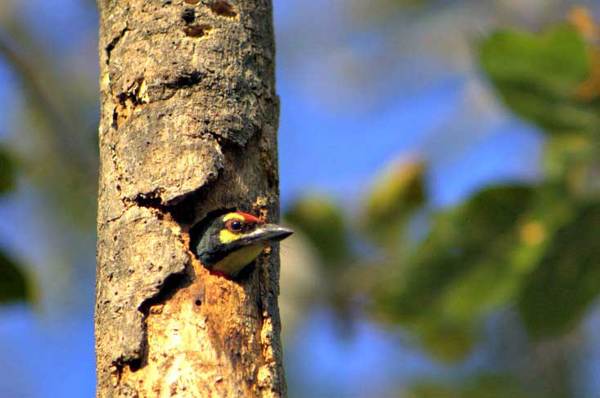 Coppersmith barbets have also been found nesting in the city. They can be identified by the bright red mark on their foreheads and throats, and yellow patches around the eyes. In India, the coppersmith barbets primary breeding season is from February to April.

Like the white cheeked barbets, these barbets also chisel the wood of dead trees to nest or roost in. It has also been observed that pairs may return to the same tree or hole the following year to lay eggs. Both these barbets feed on figs, insects and berries, and fruits of various kinds.

"Birds like the coppersmith barbet have almost got wiped out of the city" says Bangalore based ecologist and ornithologist Dr. MB Krishna. "From around the mid 80s to now, the decline of certain birds, have been drastic and severe. Hole-birds and ground birds are the birdswhich are disappearing most in the city," he says. "It could be a 98% decline over the last three decades," he says about the population drop.

Programmes like Migrant Watch which is a citizen oriented programme, track migratory birds in India. This programme aims to track all the birds that are migrating in and out of India and observe the pattern changes. All of the work and activity of this programme completely depends on the individuals and volunteers who contribute their own observations. This programme is coordinated by the National Centre for Biological Sciences and the Citizen Science Programme.

Can a supermarket with sanctioned parking for cars open it only for two-wheelers? This has caused citizens to pursue the matter doggedly, unexpectedly unearthing major violations.